States like New York and Illinois recently pledged ratepayer dollars to support aging nuclear power plants, and they made those incentives part of an overall carbon-reduction strategy that bolstered renewable energy.

Critics say Ohio is taking a short-term view, bolstering its nuclear plants without laying the groundwork for renewable energy to take over when nuclear plants get decommissioned in the coming decades. But proponents say the bill works for Ohio by propping up the plants, which produce 90 percent of the state’s carbon-free power, and reducing energy costs for a state with higher unemployment than the national average.

“States are seeking an orderly transition away from those nuclear plants to make sure there is a corresponding increase in wind and solar energy that accompanies the nuclear energy,” Samantha Williams, Midwest region director for the Natural Resources Defense Council’s climate and clean energy program, said. “The Ohio bill doesn’t do that, it does the opposite.”

But bill sponsor State. Rep. Shane Wilkin (R) says eliminating Ohio’s clean energy and efficiency mandates is a “big win” because the state gets to support the nuclear plants while lowering bills at the same time.

“Our big focus was we wanted the bills to get lower, not higher,” he said. “Here in Ohio, had the bills gone higher, it wouldn’t have worked.”

For years, nuclear operators like FirstEnergy Solutions have called for state support of their reactors’ costlier production with subsidized rates.

Their pitch: They can’t compete on the market against cheaper options, such as gas-fired plants, and if the reactors close, the state would face layoffs and carbon dioxide emissions from other sources. Since 2016, New York, Illinois, New Jersey, and Connecticut have heeded that call and enacted some form of support program for struggling nuclear plants. 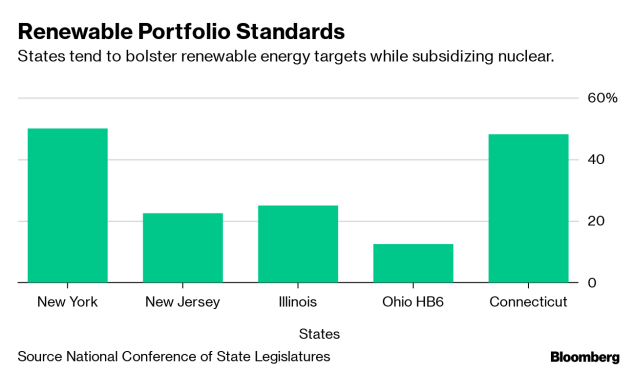 Keeping the plants running is a huge carbon saver, said Dean Murphy, principal for the Brattle Group. For example, without the Perry nuclear plant, Ohio would have to ramp up carbon-generating gas or coal plants, pumping about 4 million tons of carbon dioxide into the atmosphere annually—the equivalent of 1 million cars.

“The notion is that the nuclear plants are a way to hold down carbon in the interim while we’re doing things to lower our carbon production,” he said. “They won’t last forever, but just keeping them going as long as they reasonably can gives you some time to build out renewables.”

House Bill 6 started as a $300 million program creating $9.25 credits for each megawatt-hour of “zero carbon” energy produced in Ohio. But when Democrats declined to support the proposal, Republicans lowered the credit to $9 and limited it to nuclear energy and a handful of solar plants that already received Ohio regulatory approval.

To pay for the estimated $190 million in subsidies for FirstEnergy Solution’s Davis-Besse and Perry nuclear plants, House Bill 6 would scrap state subsidies for electricity providers that pay for energy-efficiency rebates (like customers’ LED light replacements) as well as subsidies to electricity companies to ramp up renewable energy production to 12.5 percent by 2027.

Republicans supporting the bill say the proposal would save money and about 4,000 jobs. The subsidies cut from residential bills amount to $4.68 per month per each customer. That would be replaced with subsidies for the nuclear plants starting at 50 cents per customer per month in 2020 and rise to $1 per month from 2021 through 2026. 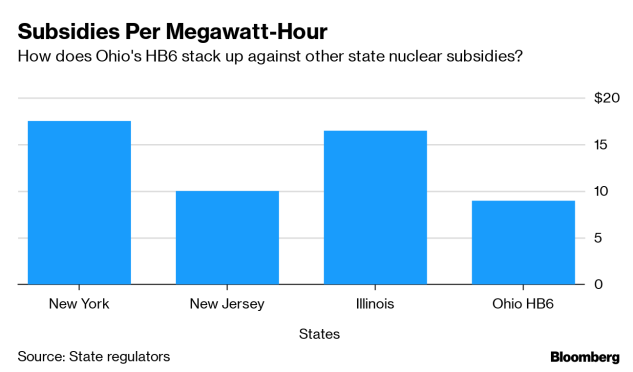 The Ohio Consumers’ Counsel argues the state’s energy efficiency subsidies save customers more than $600 million annually. But critics say there’s no reason that utilities can’t do these programs on their own dime.

There’s also little proof that Ohio’s renewable subsidies are working, critics say. Right now, despite state and federal support, only about 3 percent of electricity comes from renewables in Ohio, Wilkins said. Meanwhile, industrial customers are paying high rates for power that could be spent on hiring.

The bill would allow township residents to hold a referendum to block wind power developments that have already received permits from the state. That provision was supported by testimony from many farmers and rural Ohioans who testified against wind power in the state.

“I think most developers would not want to invest the time and resources in the Ohio Siting Board process if that can just be undone by the later process. If it passes, I think you’ll see our members diverting to other states,” Gohn said. “No other energy source is subject to this double-jeopardy.”

The bill passed the House in late May has received support from Senate leadership and Gov. Mike DeWine (R). There are Senate committee hearings on the bill scheduled for June 11 and 12.

To contact the reporter on this story: in Columbus, Ohio, at aebert@bloomberglaw.com