Skyscrapers and buildings on the Manhattan skyline in New York
Photographer: Michael Nagle/Bloomberg

The Senate confirmed Nuria Fernandez to run the Federal Transit Administration as the Biden administration seeks to improve bus and rail service, with an emphasis on green technologies and serving previously neglected communities.

Fernandez, confirmed by voice vote Thursday, will become the first woman of color confirmed to the post. She’ll lead the 550-person agency as the nation recovers from the pandemic.

Among the projects she supports is the long-delayed Gateway rail project to alleviate congestion between New York and New Jersey. In one of her first moves as acting administrator, Fernandez rescinded a Trump-era policy that prioritized projects with substantial nonfederal funding—which boosts the chances for major projects such as Gateway to get money. 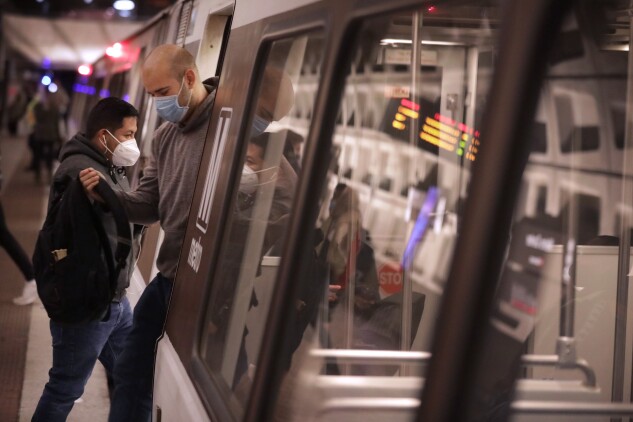 Wearing masks to reduce the risk posed by the coronavirus pandemic, commuters step in and out of a Metro train car in December 2020 in Washington, D.C.
Photographer: Chip Somodevilla/Getty Images

“Public transportation is the greatest equalizer: it allows people to get to jobs, schools, and services, regardless of where they live, if they own a car or their ability to drive,” Fernandez said at her confirmation hearing. “Yet, to fully achieve that vision for everyone, we still have some miles to travel.”

Fernandez, with supporters on both sides of the aisle, said her goals include making travel more sustainable, improving diversity in transit, and working with Congress to advance President Joe Biden’s infrastructure legislation, amid partisan challenges to getting more transit money.

“We’re really looking for the kind of investment for public transportation that’s decades overdue,” said Paul Skoutelas, president and chief executive officer of the American Public Transportation Association, who called Fernandez the ideal candidate for the job. “We need to look to the future, that future we believe has public transit at the center.”

Biden is working to push forward his trillion-dollar infrastructure package, as Congress is moving to reauthorize surface transportation policy. Fernandez is likely to face Republican pressure to spend on infrastructure any leftover Covid-19 relief money from areas such as transit.

“People are resuming daily life, and transit will return to its backbone role of moving our country,” Fernandez said.

During the pandemic, Fernandez was chair of the APTA, where she established a national task force for transit recovery and worked with the group to successfully push for additional federal funding via the Covid-19 relief measures, Skoutelas said.

“She brought us through a very difficult period,” he said. “Having someone there that is so intimate with the issues that we’re confronting is a real advantage.”

Sen. (D-Ohio) called Fernandez “the right fit for this moment” before his committee advanced her nomination mid-May.

At the FTA, she will also lead grant programs, and lawmakers in those areas are already jockeying for her support. Sen. (D-N.J.) asked Fernandez about the Gateway project and got her commitment to work with him and project sponsors to complete requirements for it to get funding.

The passenger rail tunnel is “a project of national significance,” said Fernandez, who will oversee the Capital Investment Grants.

Why Hudson Rail Tunnel Is Getting a Washington Reset: QuickTake

Some Republicans questioned Fernandez’s priorities, including whether she understands transportation issues in rural areas. Sen. (R-S.D.), noting her experience working on transit issues in major cities, said: “It’s important not to lose sight of the transportation needs of Americans in small communities as well.”

Fernandez said the number of rural and small town transit agencies have increased over the past two decades, and she will work to ensure they get funding and technical assistance.

“Rural communities do not have the vast mobility choices that you would find in suburban and urban areas,” she said.

Sen. (R-Pa.), who supported her nomination, said he had “no doubt” he’d disagree with Fernandez on policies, but appreciated that she didn’t always toe party lines.

Fernandez “previously, and again in my view correctly, acknowledged that states and local governments bear primary responsibility for funding transit agencies, not the federal government,” he said before the committee voted on her nomination.