A boat passes the nuclear plant on Three Mile Island as seen from Goldsboro, Pennsylvania, with the operational plant run by Exelon Generation, across the Susquehanna river in Middletown, Pennsylvania on March 26, 2019.
Photographer: Andrew Caballero-Reynolds/AFP via Getty Images)

With growing interest in environmental, social, and governance (ESG) issues, the nuclear industry and its supporters want to ensure current and future reactors are weighed by such investors as a net benefit in the array of ESG frameworks sprouting up to define the scope of any energy project’s climate impact. The debate will shape whether nuclear is treated as a durable climate solution—or as a short-term technology that should be phased out in favor of renewables like wind and solar.

“We’re putting a stake in the ground and saying: It’s zero carbon, other aspects of environmental issues are well-managed, and we think it belongs in with other green technologies,” said Stephen S. Greene, nonresident senior fellow at the Atlantic Council’s Global Energy Center who authored a report in March advocating for nuclear to be part of ESG criteria.

The Nuclear Energy Institute, the industry’s lobbying arm, argues that without nuclear, no way exists to meet the Biden administration’s target of net-zero greenhouse gas emissions from the U.S. economy by 2050. NEI recently launched a 10-person ESG and climate finance team with an aim at preserving the country’s nearly 100 reactors and getting recognition for next-generation nuclear plants.

The biggest investment banks and credit rating agencies have a “hunger to understand” how nuclear fits into the climate puzzle, said Monica Trauzzi, NEI’s senior director of external communications and climate finance strategy and engagement.

But nuclear energy skeptics respond that renewable technologies can scale up with fewer concerns.

The “safety, security, proliferation and economic risks” of nuclear are “fundamentally different” than the impacts from solar, wind and battery storage, said Steve Clemmer, director of energy research and analysis for the Union of Concerned Scientists.

“We don’t think that nuclear power is clean or green energy because of its mining, waste and other environmental impacts,” Clemmer said. “It doesn’t really meet most of the criteria you would need to qualify as an environmentally and socially responsible investment under these frameworks, in our opinion.” 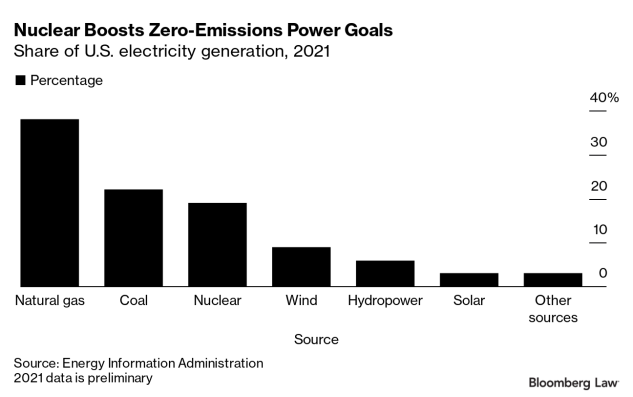 Greene’s report, published by the Nuclear Innovation Alliance, argued that advanced nuclear reactors—which are still under development—compete well with wind, solar, batteries, which have disruptive mining and waste streams. He pressed for a “consistent analytical treatment” for nuclear that leaves out “the emotional side or the political aspects” of disposing of nuclear waste.

“The industry has to figure out how to do that outreach to the financial community,” Greene said. “We think nuclear’s challenges should be treated on par with challenges that other technologies face.”

The Energy Department is close to publishing a strategy to secure supplies of uranium and enriched fuel production—a push that has taken on greater urgency after Russia’s invasion of Ukraine upended the fuel supply chain. The department is also trying to solve the decades-old political gridlock on where to store nuclear waste.

But the Russian invasion also sparked fears about nuclear safety after Russian troops marched through the Chernobyl Exclusion Zone, the site of the 1986 nuclear catastrophe, and seized a Ukrainian nuclear plant.

Nuclear is navigating a landscape where growing appetite for cleaner investments has not always brought forth consistent definitions of what counts as clean, legal experts said in interviews.

“It’s all really messy and complicated because anything we’re doing in this space is going to involve tradeoffs,” said Maggie Peloso, a partner with Vinson and Elkins LLP focused on climate change risk management and environmental litigation.

Some investors may focus entirely on nuclear’s ability to provide baseload power with zero emissions, while others may zero in on uranium mining and the accumulation of waste, Peloso said. Wind, solar and batteries currently lead to more mining around the world and confront questions about how panels and turbines will be recycled or safely disposed.

“There are not a lot of things out there, when we think about energy transition, that are purely and unambiguously ESG good,” Peloso said.

Frameworks vary widely in how nuclear may be assessed, Peloso and others said. The European Commission is weighing nuclear as a “transitional” climate solution. In the U.S., the approach favors letting investors decide—though they may get more ESG data under the Securities and Exchange Commission’s proposed rule that would require public companies to issue a new set of climate-centric disclosures.

“When you think more broadly about ESG factors, it’s just not black and white,” Peloso said.

Bruce Power L.P., a nuclear operator in Ontario, Canada, earned a “medium green” rating on a $500 million in bonds designed to increase output and extend the plant’s life beyond 2060. The company, with eight nuclear reactors with a total capacity of 6,400 megawatts, operates the largest nuclear plant in the world.

Cicero, however, cautioned in its report that it would continue to take a technology-neutral approach and consider projects’ impact on climate change and uranium sourcing, transportation, and waste policies.

The Bruce Power rating “doesn’t open the door for all nuclear to be green,” Christa Clapp, co-founder and managing partner of Cicero Shades of Green. “We want to look at that whole value chain.”