This plot of sagebrush steppe on federal land near Nevada's Great Basin National Park has been left ungrazed since 1934, and is more biologically diverse than the surrounding land heavily grazed by livestock.
Photographer: Bobby Magill/Bloomberg Law

A warm winter in the sagebrush-flanked valleys of northern Nevada has left snow-free grasses where rancher J.J. Goicoechea has his federal grazing allotment ripe for his cows to feed—if only he was allowed to use it this time of year.

For years, he’s argued in vain that ranchers—not the government—should decide when the lands can be grazed. The Eureka County, Nev., commissioner and former Nevada state veterinarian has taken that plea directly to the White House.

He may soon get his wish. Six years after rancher Cliven Bundy led an armed standoff with the Bureau of Land Management in Bunkerville, Nev., over his refusal to pay fees for grazing on federal land, the agency is redoing its 25-year-old grazing rules under the direction of self-described “Sagebrush Rebel” William Perry Pendley. The BLM’s acting director is a longtime grazing-rights advocate who has written sympathetically of the outlaw ranching that led to the Bundy standoff.

The overhaul is kindling tensions that go to the heart of who should control federal land. Grazing rights dominated the politics of the rural West decades before Bundy’s standoff and another one two years later in which a group including Bundy’s son Ammon took over the Malheur National Wildlife Refuge in Oregon.

The rules will affect 21,000 grazing allotments under BLM control across an area the size of California and Montana combined—154 million acres—in 13 states. All of that land provides about 4% of the forage consumed annually by U.S. beef cattle and 9% by sheep raised for commercial use, according to a 2015 study led by the University of Idaho, Caldwell. 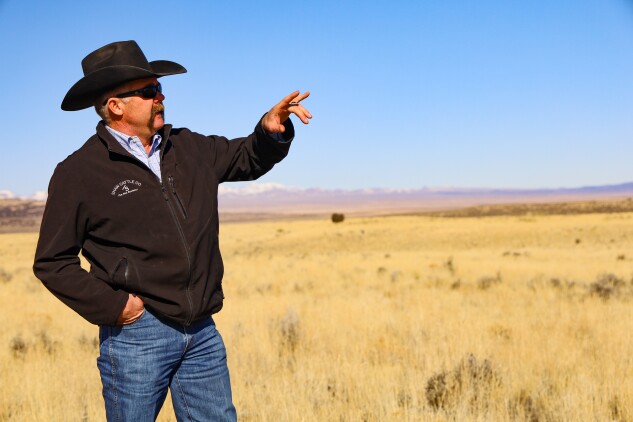 The rules are aimed at addressing how federal law is enforced on public land; how ranchers graze their livestock there; and how grazing affects wildfire, endangered species, water supplies, and the effects of climate change on public land. The agency hasn’t proposed specific regulations yet, but has asked the public to comment until March 6 on broad goals. It didn’t respond to requests for comment from Pendley.

“Grazing is a contributing factor to everything in the Great Basin. It’s just ubiquitous,” said Matt Williamson, an ecologist at Boise State University in Idaho. “It’s hard to untangle it from other things that happen in a place.”

On one side are ranchers and their allies, some of whom are sympathetic to Cliven Bundy.

“This really is about rangeland health and ensuring that high quality habitat and high quality resources continue to be the focus of the agency,” said Kaitlyn Glover, executive director of natural resources for the National Cattlemen’s Beef Association and executive director of the Public Lands Council, a grazing-rights advocacy group. “Ranchers play a key part in ensuring our ecosystems are healthy.”

On the other side are environmentalists who say that President Donald Trump, who in 2018 pardoned two Oregon ranchers central to the standoff there, and his administration are disregarding environmental damage to reward a tiny number of ranchers. Some congressional Democrats such as Sen. Tom Udall (D-N.M.) share their concerns.

“We’ll probably see these grazing regulations give a lot of control over to the livestock industry,” said Randi Spivak, public lands program director for the Center for Biological Diversity. “What’s important is that these lands are owned by the public and the BLM is required to manage them for the myriad of wildlife.”

Grazing was a significant part of the Sagebrush Rebellion, an anti-federal government movement among some Western ranchers that kicked off in the late 1970s after Congress passed a law that asserted more federal control over public lands in the West, standardized livestock grazing fees, and de-prioritized grazing in some areas. Angry ranchers thought the land should be under local control, and tensions, which subsided in the late 1980s, began simmering again when the Clinton administration wrote the existing grazing regulations in 1995.

The BLM under the George W. Bush administration attempted to revise those regulations in 2006, but environmental groups sued, accusing the rules of violating several federal lands and environmental laws. An Idaho federal court enjoined the Bush grazing rules, and the 1995 rules remain in effect today.

Udall said he wants to see the BLM go “back to the drawing board” with the overhaul in part to give the public more time to comment on the overall goals of the new rules.

Grazing’s impact can be seen throughout Nevada, where 100 mile-long valleys and hillsides are covered with stunted sagebrush and a mixture of invasive and highly flammable cheatgrass, cow manure, and trees that have been cut, or “lopped and dropped,” to facilitate grazing and other uses. Boise State’s Williamson’s 2019 research shows that grazing contributes to the spread of cheatgrass, something ranchers vehemently deny.

One federal employee working in Nevada, who spoke on condition of anonymity for fear of retaliation al officials, said grazing has left some of the valleys ecologically “depleted.”

During a February visit to one such valley, the employee stopped a truck at an area that had been flattened by sheep and covered in their manure. The employee said the overgrazing is evidence that a rancher had violated terms of his leasing permit for years.

The BLM doesn’t officially know how much unlawful grazing happens because it often doesn’t keep records of the incidents, according to a 2016 Government Accountability Office report published following the Malheur standoff.

But according to 2018 BLM data, only about 36% of the BLM’s 154 million acres of land open for grazing meets the bureau’s rangeland health standards. About 26% fails to meet the standards. The bureau doesn’t know the ecological state of about 38% of its grazing land, partly because it’s in very remote areas. 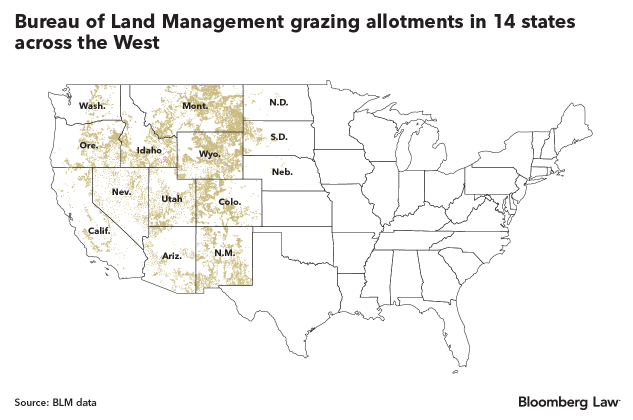 ‘Millions and Millions of Acres’

“You’re talking about millions and millions of acres that are now in substandard or degraded conditions,” said Jeff Ruch, Pacific director for Public Employees for Environmental Responsibility, which analyzed the BLM data.

Where the government and some scientists see overgrazing, Goicoechea sees an opportunity for cows to eat down grasses that fuel wildfires when temperatures warm.

“We’ve got to do a better job of using livestock to reduce this fuel,” he said on a visit to his grazing allotment. “We’d like to make sure this didn’t burn.”

Research shows that over-grazing leads to a decline in biological diversity, destruction of the biological soil crust that allows life to flourish in arid regions, and soil erosion, said Nichole Barger, an arid lands ecologist at the University of Colorado-Boulder.

Soil erosion from overgrazing also has implications for water supplies in the West.

That’s because the wind blows loose soil off overgrazed areas and deposits it onto high mountain snowpack, darkening the color of the snow and causing it to absorb heat and melt earlier and faster in the spring. That contributes to reduced stream flow for people who need the water—a scenario only made worse by climate change, said Michael Duniway, a U.S. Geological Survey soil scientist based in Moab, Utah. 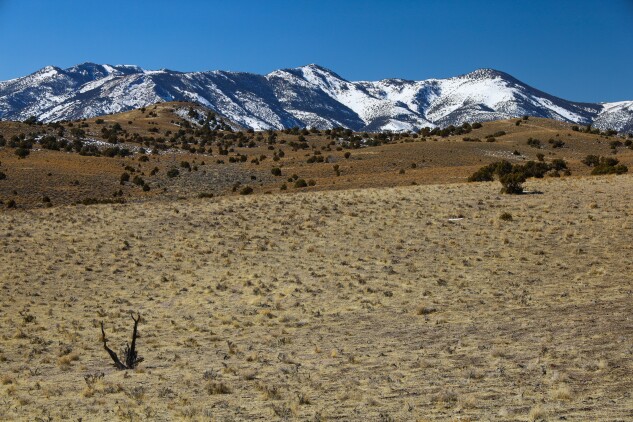 Today, ranchers have to take on a lengthy public process under the National Environmental Policy Act to shift the season in which they’re allowed to graze, or start using their cows to eat flammable grasses.

“We need that flexibility to throw that permit open, allow anytime in a 12-month period to have grazing,” Goicoechea said.

The BLM is rushing to finalize new rules during President Trump’s first term. A draft is expected by August, said Seth Flanagan, the BLM’s project manager overseeing the overhaul.

The agency wants to skip most of the NEPA process and avoid the “burden” of including the public in decisions about when grazing can occur on a given allotment, Flanagan said. The new regulations will also incorporate GAO recommendations to update procedures for handling unauthorized, unpaid, and unlawful grazing, including the outlaw ranching that led to the two standoffs.

It’s never been easy for the BLM to enforce its rules, including making sure that ranchers pay for the right to graze, former Interior Secretary Sally Jewell told Bloomberg Law. Ranchers pay $1.35 to buy the monthly forage on federal land to feed the equivalent of one cow.

“The BLM had a hard time for decades enforcing grazing regulations because they don’t have enough people,” Jewell said.

“You’ve got people like Cliven Bundy who was responsible for, you know, the standoff with the BLM when they tried to enforce the law after he had not been paying grazing fees for decades,” said Jewell, who led Interior during both the Bunkerville and Malheur standoffs. 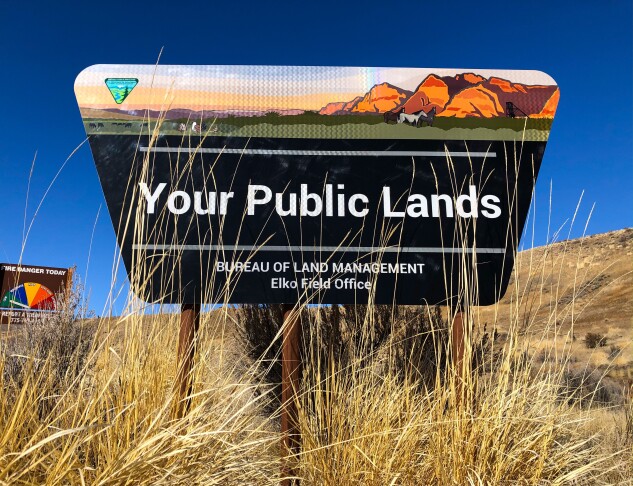 Some well-connected ranchers and local government officials see updated regulations as a baby step toward moving more control of federal lands to state and local officials, and possibly transferring them to states or local governments, said Demar Dahl, an Elko County, Nev., commissioner and co-founder of the anti-federal lands American Lands Council.

Dahl has met with Trump at least twice since 2015 to advocate for the transfer of federal lands to states, and he said he planned to do so again.

“We have a great opportunity here,” Dahl said in an interview during a Feb. 18 BLM grazing regulations scoping meeting in Elko. “These regulations are definitely in the right direction.”

Goicoechea said Dahl is an outlier among ranchers and public officials, however. Most want to play by the rules and don’t advocate for the wholesale transfer of public land, though small land transfers are reasonable, he said. 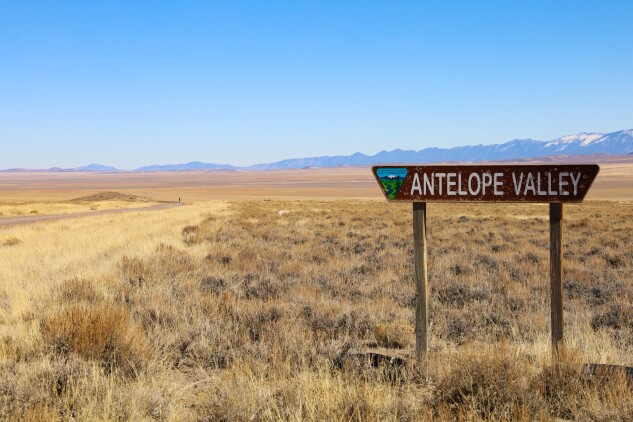 A break along a road in in White Pine County, Nev., was covered in cheatgrass and other invasive grasses in February 2020.
Photographer: Bobby Magill/Bloomberg Law

The Trump administration is affirming every aspect of the Sagebrush Rebellion and the anti-government aims of those involved in the Malheur standoff, said James R. Skillen, an associate professor at Grand Rapids, Mich.-based Calvin University, who published a 2009 history of the BLM.

The BLM is “trying to reaffirm that ranchers are good stewards of the land, that they’re taking care of the land and that they shouldn’t be burdened with unnecessary government process,” Skillen said.

That affirmation is clear in the BLM’s announcement, which suggests that restrictions on grazing that protect the environment and habitat of the endangered sage-grouse won’t apply anymore, said Erik Molvar, executive director of Western Watersheds Project, an environmental group.

“This is the brass ring that the livestock industry has been begging for for decades—to be put in charge of managing themselves on public lands,” Molvar said.

But (R-Utah), the ranking member of the House Natural Resources Committee and a longtime champion of transferring federal lands to states, said he doesn’t see the updated regulations quelling the tensions.

“Until the federal government actually recognizes and emphasizes the role of local citizens who live in those areas, which this administration is moving in that direction—past administrations totally ignored that concept—you’re not really going to have a truce,” Bishop said.