New York State is embarking on the most aggressive climate action plan in the nation.

The new targets that Gov. Andrew M. Cuomo (D) signed into law on July 18 would more than triple New York’s solar capacity and unleash wind power off the coast.

The law codifies the state’s goal of getting all its electricity from emission-free sources by 2040 and an 85% reduction in economywide emissions from 1990 levels by 2050.

“Signing the law is an historic and vital step,” Cuomo said. “But we must execute also. Especially when the goals may outlast the tenure of the people setting them.”

The legislation, passed June 19 by the state Senate and June 20 by the state Assembly, sets the most aggressive clean-energy targets in the country—ahead of California, which is aiming for 100% clean power by 2045.

The law calls for 9 gigawatts of offshore wind power by 2035, from zero used in the state today, and increasing the amount of solar power in New York to 6 gigawatts by 2025 from about 1.7 gigawatts currently.

Cuomo at the July 18 event also signed agreements for two offshore wind projects, which are expected to generate 1,700 megawatts of energy, powering more than 1 million homes.

It remains to be seen how New York will pull off the ambitious goals.

The law takes effect Jan. 1, 2020, and sets a detailed timeline with deadlines for establishing advisory groups and creating a scoping plan. 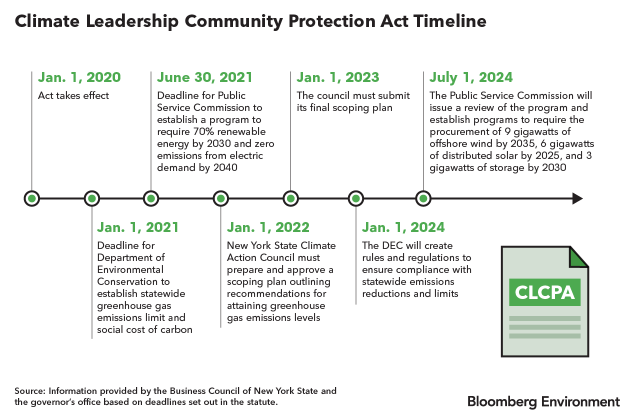 Industry groups including the Business Council of New York State are concerned about the cost of implementation, particularly for the state’s manufacturers. Major employers such as steel, concrete, copper, aluminum, paper, and semiconductor manufacturers will have to lower or offset emissions and absorb higher energy costs.

Utility executives have said that a 100% green grid is impossible using current technologies.

Karen Moreau, executive director of API-New York, said in a statement that “legislators need to strike a balance between providing affordable energy for consumers and protecting the environment—and the role of natural gas in New York’s energy mix does just that.”

A last-minute change to the legislation created several advisory councils and a “Just Transition Working Group,” giving business leaders a seat at the table for the creation of the state’s climate action plan, Darren Suarez, the business council’s director of government affairs, said.

“It’s important to ensure that business is both involved in the development of the climate plan and the design and implementation of research and development, to ensure that the state is developing real-world climate strategies,” Suarez said.

While the council applauded the flexibility the law provides, leaving much of the decision-making up to the administrative process, an analyst for the Empire Center for Public Policy argued that it leaves too much up to state agencies.

“These are economywide regulations that will inevitably result in some businesses having to shut down and individuals having to make major changes in their lives,” he said.

Individuals may wait to make investments until they know what will be affected by the regulations, Girardin said. “The bill was written in a way that’s injecting uncertainty into the economy.”

Girardin also argued that the bill goes too far in dictating how the goals will be met, relying on solar and offshore wind. It doesn’t leave room for other clean energy sources, such as hydropower, he said.

The state Climate Action Council under the law has until Jan. 1, 2022, to prepare and approve a scoping plan outlining recommendations for attaining the greenhouse gas emissions objectives. The final plan is due Jan. 1, 2023.

A growing number of cities and states also have set 100% clean power targets, including California, Hawaii, and New Mexico. The goal is to shift the U.S. away from fossil fuels and other sources of emissions that cause global warming.

“New York is such a huge market when it comes to combustion of fossil fuels. This legislation essentially tells the world that New York is getting off fossil fuels in 30 years,” he said.

The law is an opportunity for businesses and entrepreneurs to innovate and find ways to move sectors such as transportation and manufacturing away from fossil fuels, Iwanowicz said.

While he lauded the signing of the bill, he doesn’t think the timeline is ambitious enough and hopes the state Climate Action Council meets as soon as possible.