Boron is in U.S. soldiers’ body armor, the Predator drone, satellites, permanent magnets, and military helicopters. No electrical vehicle works without it.

It’s very light, second only to diamonds in hardness, heat-resistant, corrosion-resistant and anti-microbial.

Yet boron has yet to crack the list of “critical minerals” designated by the U.S. Geological Survey, even as increasingly shaky geopolitics threaten global supplies of rare earths and minerals. 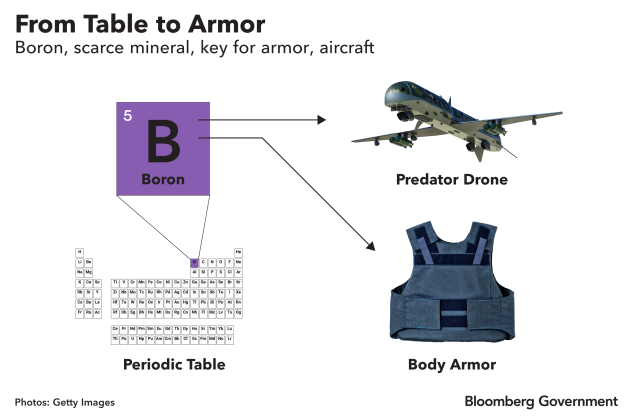 Raising boron’s importance to eventually get on that list is a bet-the-company matter for the owner of a mining venture in California’s Mojave Desert that’s believed to have the world’s largest known new boron deposit. It needs the spotlight— and ultimately the critical mineral designation—to win backing from the Pentagon, Energy Department, and Congress to access contracts and billions of dollars in loans and grants for the mine’s development.

“Boron is where lithium was probably 10 years ago, " said Henri Tausch, CEO of 5E Advanced Materials Inc., which owns the mine known as Fort Cady. “Ten years ago, no one heard about lithium, no one talked about lithium, and no one was really aware that it could be a big problem.”

As the U.S. attention is shifting to domestic production of materials critical to the economy, climate, and national security, funding is competitive because of the government’s often restrained resources for such projects.

The U.S. accounts for about 20% of boron production, second to Turkey, which mines 60% of the mineral. Even so, the need for boron to be processed in China into boron carbide materials has prompted the Pentagon to recommend that the defense industrial base establish a second U.S. source of boron carbide in addition to , which also mines in California. China is the source of 80% of boron composite materials for military purposes.

Boron doesn’t occur in nature in an elemental state; it combines with oxygen and other elements to form boric acid or inorganic salts called borates, according to research by Amanda Brioche, a mineral commodities specialist with the USGS, part of the Interior Department.

Fort Cady sits on an estimated mineral resource of 120.4 million tons of colemanite, one of four types of borates that, according to Brioche’s research, account for 90% of the borate minerals used by industry worldwide. It’s the largest known conventional contained borate occurrence in the world that isn’t owned by Rio Tinto or Eti Maden, a company owned by the Turkish government.

Usually to find boron deposits, one has to look in “a volcano, an evaporated water body, or a fault line,” Tausch said in an interview. 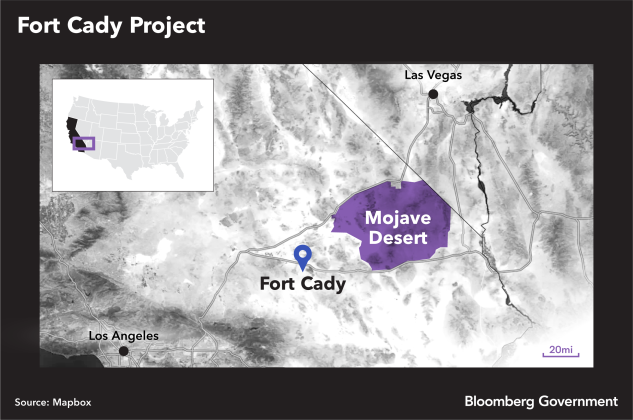 The mine is not yet operational, but the company is “very near to breaking ground,” with small scale mining operations set to begin by the end of the year with “sellable product,” according to Chance Pipitone, 5E’s senior vice president of corporate development and investor relations. Large scale production is slated by 2025, he added.

But mining and processing deposits is lengthy and expensive. It often takes 10 years to develop a mine after exploration, said Ben Steinberg, an executive vice president and co-chair of the critical infrastructure group at Venn Strategies.

“Changing the structure of the supply chain for these materials is difficult without government incentives and partnerships with the private sector,” the Defense Department wrote in the 2022 report on the State of Competition Within the Defense Industrial Base. “The U.S. depends heavily on foreign sources for critical chemicals in its weapon systems.”

The U.S. Defense Logistics Agency lists boron as a strategic material because it is used as a component of composite materials (boron fibers) in advanced aerospace structures and as an industrial catalyst to make things like polymers. It also plays a major role in electroplating nickel, lead, and tin; in inner plates of ballistic vests; and for tank armor (carbon boride) and permanent neodymium (NdFeB) magnets, according to DLA.

The strategic designation allows the Defense Department to stockpile the materials.

But strategic materials and critical minerals aren’t necessarily the same thing. It depends which agency reviews the materials and makes the designation.

The Energy Act of 2020, part of the , defines a critical mineral as a non-fuel mineral or mineral material essential to the economic or national security of the U.S. and which has a supply chain vulnerable to disruption, according to the U.S. Geological Survey. Critical minerals serve an essential function in the manufacturing of a product. Their absence would have significant consequences for the economy or national security.

Boron so far hasn’t met the definition of a critical mineral because, given current levels of domestic production, “the U.S. is not highly reliant on imports for these minerals and typically has a combination of domestic reserves and reliable foreign sources adequate to meet foreseeable domestic consumption requirements,” Steven Fortier, USGS National Minerals Information Center director, told the Senate Energy and Natural Resources Committee on March 31, adding that boron is “important” to U.S. national security and economy.

Because boron is already considered a strategic material, 5E could access a portion of the more than $330 million available through Title III of the Defense Production Act, meant for U.S. industry to expand productive capacity and supply needed for national defense purposes.

President Joe Biden recently invoked his authority under the law, first wielded by Harry S Truman to make steel for the Korean War, to spur domestic production of electric vehicles. Biden called for $659 million in fiscal 2023 for the entire manufacturing base, but Congress has to appropriate that amount, Venn Strategies’ Steinberg said.

A DPA Title III designation and other potential government funding “would shore up the balance sheet,” Pipitone said, and help accelerate the mining project.

The mine is in a favorable position because it also has lithium, which at the core of the Biden administration’s drive to boost production of advanced batteries needed for clean energy. This already opens up access to some loans from the DOE, such as the Advanced Technology Vehicles Manufacturing Loan Program, priced at U.S. Treasury rates, Pipitone said.

A critical mineral determination could open the door to $2 billion in incremental funding from the Energy Department as well, Pipitone said.

“We could fund almost 70% of the project with an ATVM loan program,” he said.

Raising awareness at the Pentagon and on Capitol Hill as lawmakers start writing the fiscal 2023 defense authorization bill and other key legislation is part of the company’s playbook to hammer down the importance of boron and derivatives to U.S. national security, economy and energy.

The company has paid lobby shop Ervin Graves Strategy Group LLC $140,000 since last July, with $60,000 spent in the first three months of the year, according to the U.S. Senate lobbying disclosure database.

“The 5E project is an extraordinary opportunity to accelerate a full-scale domestic boron capability that’s accessible to both industry and the federal government,” said Joe Kasper, managing director at Ervin Graves and a veteran of Capitol Hill, Pentagon, and the Department of Homeland Security. “The extent of boron’s application to our national security and manufacturing base compels even greater urgency in the project, just as the sustained interest of China and others in the boron value chain underscores the project’s necessity.”

To contact the editors responsible for this story: at bkohn@bloomberglaw.com; at lduggan@bgov.com