A $1.3 billion mining project is taking shape in the desert of northern Nevada that could get the U.S. into the global battery game—if and when the mine gets its environmental permits.

Lithium Americas sees a big business opportunity because global demand for the soft, whitish stone is expected to spike, driven by growing lithium battery use in everything from cell phones to electric cars.

Global lithium demand could triple from 300,000 tons of production capacity per year to 1 million tons by late 2020, depending on factors such as whether big automakers like Volkswagen AG and Daimler AG make good on their stated plans to build more electric vehicles, said MacMurray Whale, an industrial technology analyst with Cormark Securities Inc.

Moreover, only one other mine in the U.S.—the Silver Peak Mine, also in Nevada—is producing meaningful quantities of lithium. The U.S. produces only 1% of global lithium mineral supply.

The Trump administration also wants to promote the growth of an entire lithium-to-batteries supply chain in the U.S., both to spur a new domestic industry and to wean the nation off foreign suppliers.

Most of the world’s lithium now comes from Australia and South America, and most lithium batteries are made in South Korea, Japan, and China. 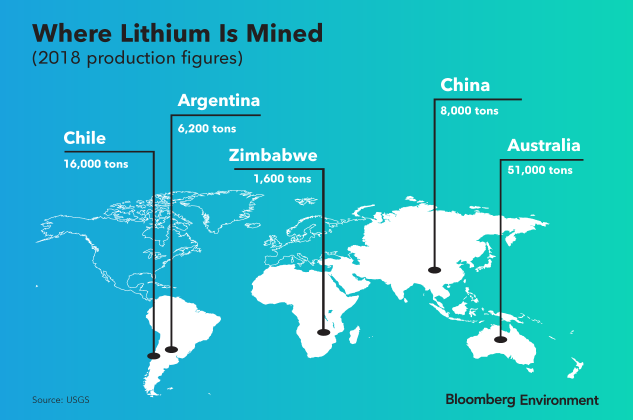 Lithium Americas says it’s on track to start building Thacker Pass in the first quarter of 2021. The mine is expected to operate for 46 years.

In May, Evans told the Senate Energy and Natural Resources Committee that the NEPA process is unduly cumbersome and unpredictable, needlessly delaying projects like Thacker Pass.

The Trump administration has been trying to speed up permitting for all types of mines. The White House directed agencies to move faster on permits in a 2017 executive order, and more recently issued a broad list of policy ideas to boost domestic supplies of critical minerals. Lithium is one of the critical minerals the federal government views as vital for economic welfare and national security.

If Thacker Pass is successful in churning out large volumes of lithium, a big battery maker like Panasonic or LG Chem might be enticed to sign a long-term agreement to take the company’s minerals and set up shop in the U.S. making batteries, said Chris Berry, president of financial analysis company House Mountain Partners LLC.

“The holy grail is vertical integration, just because with lithium chemicals, you want to be near your end markets,” said Berry, whose firm has a consulting agreement with Lithium Americas.

In the meantime, the company will have to raise capital to get to the production stage. Lithium Americas has the cash on hand to get its permits approved and start construction, but beyond that, the company will need to convince potential business partners and investors to come on board, Evans said.

One challenge to doing that is that lithium processing isn’t a widely understood technology in the U.S., Evans told the Senate committee. A dependable source of federal loan guarantees would help solidify investment interest, he said.

Most of the companies that make products with lithium negotiate their prices on long-term contracts that aren’t visible to the public, making it hard to know where global prices stand, Berry said. Over at least the next 10 to 15 years, however, analysts think lithium will continue to be used in batteries because it’s abundant, lightweight, energy dense, and proven to be safe.

Environmentalists generally have conflicted views on lithium mining. The mining itself can harm the environment, but lithium is used for clean technologies like electric vehicles and renewable energy.

Evans told Bloomberg Environment Thacker Pass won’t be harmful to the land, water, or air. The mine will use about 2,000 acre-feet of water per year, which will be kept mostly within the processing facility and then recycled in a closed-loop process, he said.

John Hadder, director at the environmental group Great Basin Research Watch, said that amount of water “is not a lot, compared to other mines.”

One main reason Thacker Pass won’t impose serious environmental harms is because, unlike most other lithium mines, it won’t draw lithium from briny water or rocks dug up from the earth. Rather, the mine will extract the mineral from clay, which is an inherently cleaner process, he said.

Rich Stone, the mayor of Winnemucca, Nev., said he’s not worried about groundwater contamination, especially when weighed against the 300 new employees and their families who would move to the town of some 7,800 people near the mine.

Lithium Americas also says Thacker Pass will capture the heat generated from its on-site processing plant to provide up to 60 megawatts of energy. That energy is more than enough to power the mine, and the surplus power will be provided back into the grid, the company says.

Hadder agreed that the mine “doesn’t look too bad” on the surface.

Thacker Pass’ lithium is highly concentrated, meaning it wouldn’t require “as aggressive a processing as other facilities,” he said.

But Hadder also said that because federal regulators haven’t yet started an environmental impact review of the mine under the National Environmental Policy Act, it’s hard to know precisely how much water the mine will use and where the mine will get it. Even a small amount could affect natural springs if it’s drawn from the wrong place, Hadder said.

Also unknown is whether the mine’s footprint will someday expand. If the project migrates to the north years from now, it could run into the Montana Mountains. The range in Nevada is important as habitat for the greater sage grouse, a species that is in decline as its habitat is lost to energy development, fires, road building and other activities in the West.

Evans, however, told Bloomberg Environment the company has “made a decision to stay out of the mountains to the north.”

“Most of what we know about their plan has been what they’ve been telling us,” Hadder said. “Mines always say they’re going to be environmentally sound. I’m not saying it’s the same here, and we don’t have any reason to suspect that. But it’s still yet to be seen.”