The proposed largest solar power plant in the U.S. will be a major experiment in the survival of the threatened Mojave desert tortoise, scientists say.

The Bureau of Land Management is expected to approve by the end of March the 690-megawatt Gemini Solar Project, a photovoltaic and battery-storage power plant slated to be built by Arevia Power on more than 7,100 acres of federal public land in Nevada, about 30 miles northeast of Las Vegas.

The project would provide carbon-free electricity to about 400,000 homes in the Las Vegas area and help Nevada meet its goal of producing 50% of its electricity using renewables by 2030.

But it also would straddle a sensitive desert tortoise migration corridor linking protected populations in an area where their numbers are growing. Scientists say the corridor is essential to the viability of the species.

So the BLM’s plan calls for many of the tortoises to be moved off the site for up to two years during construction, and then returned to the site after the solar panels are installed.

Some of the tortoises will be moved just outside the project boundary, and others will be moved to open desert a few miles away. The goal is for the 2019 adult tortoises to be moved, plus many more juveniles. But officials don’t yet know exactly how many they’ll be able to relocate, according to a U.S. Fish and Wildlife Service plan for the tortoises.

The best-case scenario is that the overall impact to the tortoise will be fairly minimal, but it’s not well understood if the tortoise can fully adapt to habitat beneath solar panels and their shade, said Roy C. Averill-Murray, desert tortoise recovery coordinator for the U.S. Fish and Wildlife Service.

“It would certainly be a big experiment,” he said.

Under a worst-case scenario, scientists say the Gemini project, coupled with pressure from other development in the region, could send the Mojave desert tortoise in a spiral toward extinction because it could block the species’ migration corridor.

The desert tortoise, protected as threatened under the Endangered Species Act, is a “flagship” species of the Mojave desert, Averill-Murray said. As the biggest reptile in the region, it lives for up to 80 years, weighs up to 15 pounds, and its health is an indicator of the overall viability of the Mojave desert ecosystem and the degree to which people have impacted it, he said.

About 37% of the total desert tortoise population was lost between 2004 and 2014, and the Fish and Wildlife Service estimates that about 200,000 tortoises remain in the wild. 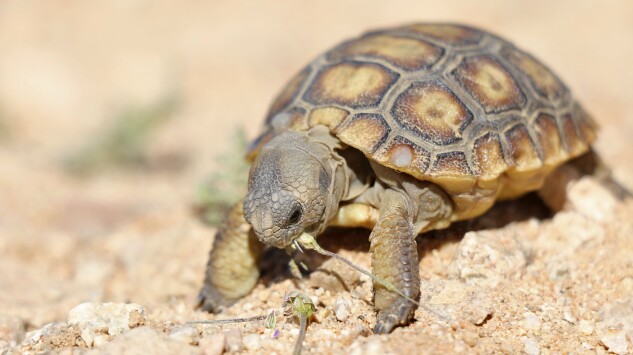 Migration is important to prevent in-breeding, which can eventually lead to species decline, Averill-Murray said.

If the land is bulldozed for the solar project, “it’s just wiped off the map for decades and decades,” Averill-Murray said. “That would then reduce the overall resilience of the surrounding [tortoise] population.”

Arevia Power’s proposal for the Gemini project, released in late December, anticipates the “loss” of 215 adult tortoises, and about 900 juveniles, as parts of the desert is bulldozed to build the solar plant. But the BLM’s preferred plan would prevent many of those deaths by removing the tortoises during construction.

The BLM prefers a “hybrid” alternative that would preserve about 65% of the project site’s vegetation, while denuding, or “blading,” the rest. The alternative also calls for moving the tortoises off the land, and then returning the tortoises after the solar panels have been installed.

“If there’s not an alternative to avoid the site, choosing this instead of blading it—when we know we lose everything on the site—seems like a viable possibility, at least to explore,” Averill-Murray said.

BLM spokesman Derrick Henry said a final decision on an alternative hasn’t been made.

Arevia worked with BLM in developing the hybrid alternative, modeling it after a smaller solar project near Pahrump, Nev., according to Arevia Power managing partner Mark Boyadjian.

That project “has demonstrated the prospect of positive co-existence of photovoltaic solar power projects and desert tortoises,” he said.

But some environmental groups say the Gemini site should be relocated entirely.

The Obama administration tried to direct solar power developments into areas where they would have relatively low environmental impact by designating solar energy zones throughout the Southwest. The Gemini site sits outside those solar energy zones because it was originally proposed in 2008, before the zones were created.

“The area they’re putting this in is seeing a lot of build-out of solar projects,” said Kevin Emmerich, co-founder of Basin and Range Watch, a local conservation group. The area “also has major highway and transmission infrastructure,” he said. “All of these work together to block migration.”

The site was chosen because it is close to electric power customers in Las Vegas and to two major electric power substations that serve the region’s grid, Boyadjian, from Arevia Power, said.

Placing a site close to the city reduces power losses along electric power lines and “lowers the cost to Nevada ratepayers and minimizes disturbance to the surrounding area, making the site an ideal area for utility-scale solar,” he said. “Any effect on desert tortoise habitat would be minimal.”

Some groups advocating for the tortoise say they’re not opposed to solar development in the region, but say it should be put in places that have been previously developed and disturbed. That’s in part because biological soil crust, which helps sustain life in the desert, can take decades—or even centuries—to grow back.

“We support these ambitious climate and energy goals that are set in Nevada,” Nature Conservancy Nevada Chapter spokeswoman Jaina Moan said. “We also recognize that all this energy development is going to have environmental impacts.”

Some sites are better than others for solar development, and the Gemini site could harm the tortoise if the developer isn’t required to take mitigation measures, she said.

“Once you break ground in the desert, it’s broken forever,” he said, adding that allowing the pristine desert tortoise habitat to be developed will accelerate the species’ decline.

“If you put a project right in the middle of where the tortoise is moving, you’re restricting gene flow,” Tuma said. “The species is on the brink of extinction.”