A customer shops for light bulbs inside a Lowe's Cos. store in Burbank, Calif., on May 19, 2017.
Photographer: Patrick T. Fallon/Bloomberg

A U.S.-led revolution in light bulb efficiency launched with bipartisan fanfare more than a decade ago should be a beacon for how to tackle even bigger climate challenges through flexible standards.

The lighting efficiency standards, which pushed consumers away from pear-shaped incandescents invented in the late 1800s, led to widespread adoption of LED lighting in homes, autos, and commercial properties—even with hiccups along the way.

But how it was done—through a technology-neutral approach that set firm efficiency targets, but left it up to bulb-makers to decide how to comply—could offer a blueprint for using performance-based standards for a host of climate-friendly technologies.

“It’s an enormously valuable lesson that if you provide a roadmap, particularly a U.S. roadmap, global companies will innovate and provide technological changes” as long as requirements aren’t overly prescriptive and provide ample time for transition, said Andrew deLaski, executive director for the American Council for an Energy-Efficient Economy’s Appliance Standards Awareness Project.

DeLaski says efficiency requirements Congress first enacted in 2007, which survived GOP-led delays and a Trump administration effort to block a more stringent bulb standards in 2020, have been an unqualified success.

He points to two energy technologies as obvious candidates for a similar performance-based approach. One is using heat pump technologies for home and office heating and cooling systems; the other is for heating hot water.

“In both cases we need to move to very efficient heat pump technologies with a roadmap telling manufacturers where they need to be by, say, 2030,” deLaski said.

Amanda Levin, a policy analyst with the Natural Resources Defense Council’s climate and clean energy program, said similar performance-based approachs could be used to set carbon intensity targets requiring steel, cement, and other industries to cut emissions for each ton of product. 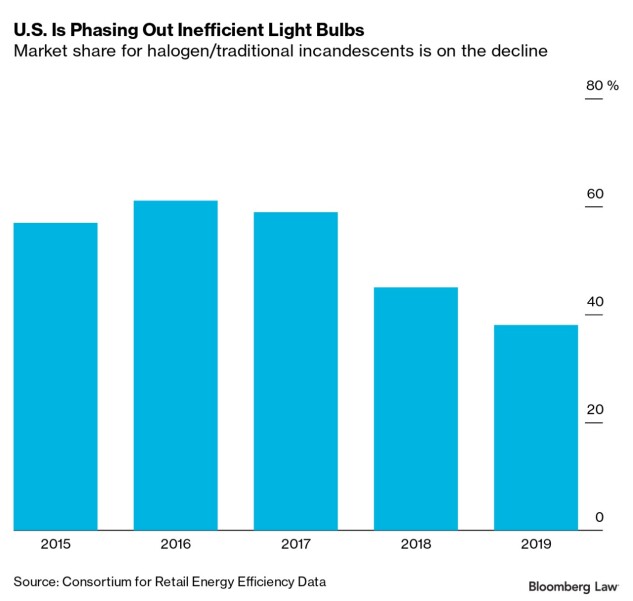 Industries would decide the most cost-effective way to comply by either changing their manufacturing process, switching to low-carbon fuel, or improving energy efficiency, she said.

“An advantage of a performance-based standard is it doesn’t specify a technology, and allows regulated entities to find the best ways for them to a meet a target,” she said.

Performance standards aren’t exactly new. The Energy Department has been setting efficiency standards for appliances since Congress mandated the effort in the 1980s.

The Obama administration also touted its carbon pollution limits for power plants, the since-shelved Clean Power Plan, for its performance-based approach in giving states and utilities flexibility to chose between a mix of different technologies and energy efficiency gains to comply.

Further light efficiency gains—including a 2020 revamping that Congress mandated—hit a bump when the Trump administration essentially declined to strengthen the rules. But the Biden administration is already eyeing whether to reverse that Trump decision.

The Energy Department included lighting efficiency in a Feb. 19 list of 13 standards that it may review and forwarded it to the White House Office of Management and Budget, which has asked agencies to suggest regulatory changes to advance Biden’s climate efforts.

A DOE spokesman said the agency’s own review is underway, but has no “sense of timing” for when a decision will be made.

But Congress has yet to apply that approach to any significant climate policies that could put a big dent in U.S. emissions. Many Democrats are rallying behind a nationwide clean energy standard relying on a performance-based approach to require utilities to get an increasing portion of their power from renewable energy.

Generally they would work by setting an overall carbon intensity measure but allow utilities flexibility to use natural gas, renewables, hydropower—even possibly coal if its carbon emissions are captured—to meet the targets.

That same technology-neutral approach is perhaps the only workable approach to address climate impacts from the coal industry, said Jim Connaughton, an energy adviser to the ClearPath Foundation, which backs conservative clean energy policies. He also chaired the Council on Environmental Quality under President George W. Bush.

“In fact, the only way to save coal is to sensibly regulate carbon emissions so inventors and investors have a roadmap and confidence to spend money on ways to cut emissions,” Connaughton said—similar to air pollution standards used for coal.

The lighting efficiency targets were tucked into an energy package that garnered bipartisan backing and that Bush signed into law in 2007.

While transitioning to more efficient lighting has largely gone according to plan, other big benefits—less energy needed to supply everything from street lights to popular residential lights on lawns, and less cooling needed to offset hotter incandescents—are often overlooked, said Alex Flint, who as Republican staff director for the Senate Energy and Natural Resources panel helped negotiate the 2007 energy law.

“This is one of the best examples of a virtuous circle” that creates additional advantages in reducing energy use, he said.

The bulb standard is now viewed as an example of how the U.S. can lead with a market-based, technology neutral mandate that also accelerates a global embrace of the technology. The European Union has since joined the U.S. in setting lighting standards, rapidly increasing the global market share of high-efficient LEDs from 5% in 2013 to nearly half of global sales in 2019, according to the International Energy Agency.

The 2007 energy law gradually shifted consumers and businesses away from incandescents to halogens—a somewhat more efficient incandescent—to compact fluorescent bulbs and eventually to LED lighting. Incandescents, including those incandescent halogen bulbs, fell from 57% share of the bulb market in 2015 to 38% by 2019.

Implementing the more stringent 2020 efficiency update Congress mandated “will shift that last” 38% of that remaining market share to highly efficient LEDs, deLaski said, as the incandescent bulbs including halogens won’t be able to meet the requirements.

To contact the reporter on this story: in Washington at dscott@bloombergindustry.com