A technician works in a life-science company laboratory in San Francisco on Aug. 17, 2018.
Photographer: Cayce Clifford/Bloomberg via Getty Images

Testing new pesticides sometimes involves having rats inhale them for 90 days, killing them, and then analyzing how much cell death or injury they find in the rodents’ noses and windpipes.

Syngenta Crop Protection LLC is trying a new approach as it compiles data on its fungicide chlorothalonil to submit to the EPA. It combines data on particle sizes, computer modeling of respiratory functions, and testing on donated human nose cells to predict how irritating the chemical would be to the airway.

It’s a test case for scientists advising the EPA, who at a Dec. 4-7 meeting will evaluate the potential utility and limitations of Syngenta’s nonanimal testing strategy. If the advisers endorse the approach, that would open the door to more companies being able to use similar approaches.

The Environmental Protection Agency’s response also would be another step in regulators’ broader efforts to decide whether alternative test methods are now reliable enough that chemical and household-product manufacturers, medical device makers, and pharmaceutical companies can reduce the need for testing on rats, birds, rabbits, and other animals.

“Syngenta has spent a lot of time and money to perfect and optimize this approach,” said Amy Clippinger, a director of People for the Ethical Treatment of Animals’ (PETA) International Science Consortium Ltd., which has been doing joint research with the EPA. “They’ve done a really good job developing a comprehensive human-relevant testing strategy.”

Dow Chemical Co., Royal Dutch Shell plc, and Unilever plc are among other companies working to perfect nonanimal testing methods, or at least tests that move away from the traditional use of mammals. EU regulators recently accepted data from Shell from tests using fish embryos, water fleas, bacteria, algae, and tiny minnows called zebrafish as evidence that a former refinery site posed no risks to the environment, said Sarah Hughes, a senior ecotoxicologist with Shell. 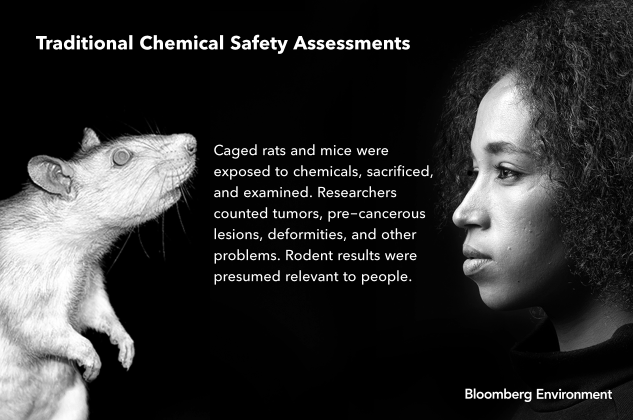 And the Food and Drug Administration’s medical device center is working with the Gaithersburg, Md.-based Institute of In Vitro Sciences and a group of personal care product manufacturers to evaluate whether a new type of test that uses human tissues could substitute for rabbit testing, Erin Hill, the institute’s president, told Bloomberg Environment. Some companies want to make vegan formulations and don’t want those products tested on animals, Hill said.

A convergence of technologies that weave together different types of chemical information has reached a point that regulators are comfortable knowing that companies are generating the data they need for some decisions, said Richard Becker, a senior toxicologist at the American Chemistry Council, the primary trade association representing chemical manufacturers.

He and other scientists described four developments and several policies that are making regulatory use of nontraditional data possible:

All of these developments—particularly the adverse outcome pathways OECD is developing—help companies as well as regulators, said Carl Westmoreland, science and technology director at Unilever’s Safety and Environmental Centre. The skin-irritation pathway, for example, shows how chemicals can bind to certain cell proteins, which triggers immune responses that result in skin rashes.

A consumer products company can use that type of test to decide if a small increase in a shampoo ingredient would be safe, Westmoreland said.

Agency changes include a 2016 letter the EPA’s Office of Pesticide Programs published inviting companies to submit data from nonanimal studies; a strategy the EPA’s chemicals office released in June describing its approach to accepting new types of data; the Predictive Toxicology Roadmap the FDA released in December 2017; and an interagency committee’s Strategic Roadmap on new ways to evaluate the safety of chemicals and medical products.

These give companies explicit information about what regulatory agencies want and how they could use that new information, said Warren Casey, director of a National Toxicology Program center working on new types of chemical safety tests.

Ordinarily, the EPA uses rat data to understand whether and how much of a pesticide would irritate people’s airways. That information helps the agency decide what types of personal protective equipment like masks and gloves, exposure limits, and other safeguards are needed to protect pesticide applicators and farmworkers. Yet rats and people have quite different airways, breathing rates, and cellular makeups, the EPA said in materials ahead of the Dec. 4-7 science advisers review.

The information the EPA advisers review next week would substitute for a small part of the data the agency uses to register a pesticide, but it’s better and more immediately relevant data than that available through testing on rats, Paul Hinderliter, a senior Syngenta scientist, told Bloomberg Environment Nov. 27.

For the new testing, Syngenta measured the amount of its chlorothalonil that pesticide users might inhale and the size range of the fungicide’s particles, he said. The smaller a particle is, the deeper it can get into lungs and cause problems. The larger the particle, the more likely it will remain in the upper parts of the respiratory tract.

Syngenta fed the applicators’ potential exposure data into a computer model that calculated where the chlorothalonil particles would be deposited in human airways. The particles were so large they wouldn’t get past the nose, Hinderliter said.

The donated cells are prepared so they regrow into fully functioning cells that “talk” to each other using enzymes, electrical impulses, and other signals that constitute cells’ “language.” The cells even have tiny hair-like structures that help remove irritating particles, he said. 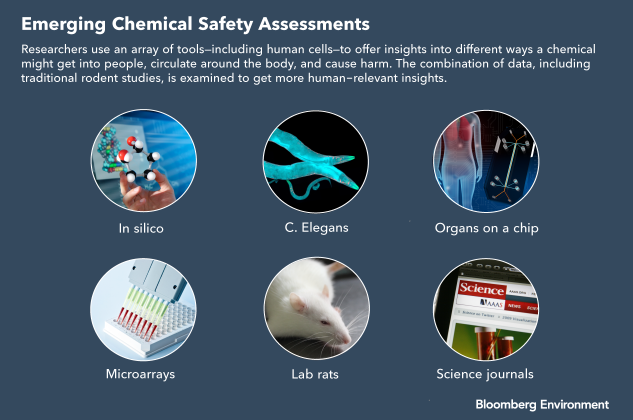 The nose cells are placed in tiny wells in specially designed plastic plates that mimic the bloodstream flowing underneath people’s cells and the air that wafts across them, Hinderliter said.

Syngenta’s scientists then measured early signs of respiratory irritation such as enzymes that cells release when disturbed and alterations in electrical charges, which signal cell membrane damage.

Those subtle early indicators of what later could become respiratory problems are important, Hinderliter said. If exposures to a chemical are kept so low that the early signs of irritation never occur, then neither would other more serious problems, he said.

In the near future, the EPA’s pesticide program will finish an ecological-safety project it and PETA undertook, said Anna Lowit, science adviser for the agency’s Office of Pesticide Programs.

Traditionally, the EPA requires pesticide manufacturers to conduct two tests exposing birds to the products they want to register. The goal is to decide whether just one test could still provide sufficient information to protect birds from short-term, high exposures to pesticides, she said.

Both Shell’s Hughes and Kathy Plotzke—chief health and environmental scientist for consumer solutions at Dow—said refinements to ecological tests are important. Companies spend more time than people realize conducting tests to determine whether their products affect fish, birds, and other wildlife, they said.

The FDA also is interested in alternative test methods, particularly for therapies for human infants, Susan McCune, director of FDA’s office of pediatric therapeutics, said during a Nov. 14-16 Society of Toxicology meeting.

Newborns can grow quickly, and that dramatic growth rate affects how drugs move through and affect babies, she said. The vulnerability of newborns and their quickly changing bodies are just two of the factors that make it hard for drug manufacturers to study the diseases these infants face, McCune said.

The FDA wants to learn more about how new types of toxicity data could help protect children, McCune said.

The biggest barrier to using new types of safety data is that human beings and institutions resist change, Casey said.

Companies often claim regulators aren’t open to new methods, Casey said. But he said his years in the pharmaceutical industry taught him that corporate managers wanting to make sure they meet their metrics—and get related bonuses—also are barriers, he said.

Nonscientist managers, who don’t understand why a new type of safety data might be better, often are more comfortable providing traditional information that they think will win regulatory approvals more quickly, Casey said.

The reluctance is understandable, Casey and Hill said. If a new crop pesticide is delayed by a few months, the producer could lose the critical, seasonal window in which the product would have been applied, they said. For a business that needs to register a pesticide, “that’s a very hard decision to make,” In Vitro Sciences’ Hill said.

“We have certain questions we have to ask. If you have a method that answers all those questions, let us know,” said Suzanne Fitzpatrick, a senior FDA toxicology adviser at the recent Society of Toxicology meeting.

“Our job is not to do all the research but to put safe and effective products on the market,” she added.