The Trump administration is expected to auction more than 110,000 acres of federal land for oil and gas development near three Utah national parks in a lease sale proposal scheduled to open for public comment May 21.

Arches, Canyonlands, and Capitol Reef national parks could see new oil and gas drilling and industrial development near their borders if the lease sale proceeds in September. The sale is part of a federal leasing push in Utah and across the West that local public officials and environmental groups say poses a threat to some of the region’s best-known natural areas and tourist attractions.

“Why would you put an oil well in the center of a Picasso or van Gogh?” said Mary McGann, Grand County Council chairwoman, whose Utah county includes Arches, Canyonlands, and the city of Moab. “When you look at the map, it looks as though there is more up for lease” than land that is excluded from the lease sales.

The Interior Department’s Bureau of Land Management has scheduled 20 oil and gas lease sales for federal land nationwide through the end of 2020, three of which will be in Utah. The auctions are part of the Trump administration’s policy to open as much federal land as possible to fossil fuels extraction.

Energy companies and individuals have nominated 639 parcels of Utah federal land for oil and gas leasing so far in 2020, according to National Fluids Lease Sale System data. Many of the nominated parcels are between and within view of Arches and Canyonlands national parks in eastern Utah. One parcel is near Capitol Reef National Park in central Utah. 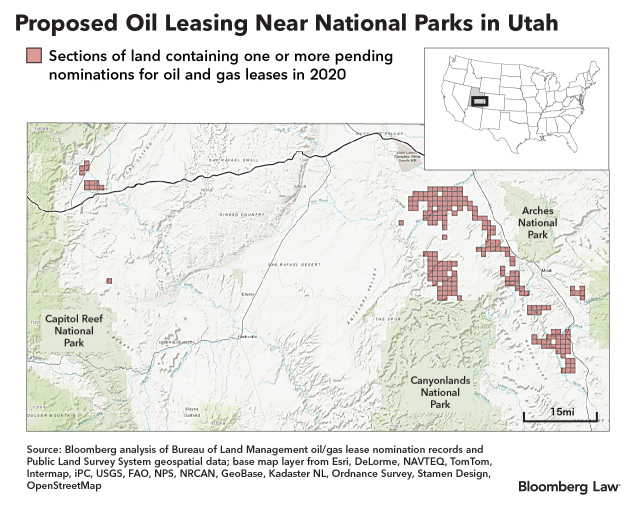 The views from Utah national parks are expansive, stretching for dozens of miles in every direction. Energy companies have been exploring for oil around Arches and Canyonlands for decades, and their impacts can be seen from within both parks.

A natural gas pipeline scar bisects Arches. At night, the flames of flaring oil wells drilled near Canyonlands’ northern boundary can sometimes be seen from the Windows, one of Arches’ most visited viewpoints.

Neither the Park Service nor the BLM responded to requests for comment.

The energy industry says oil and gas drilling around the parks has long been part of the federal government’s plan for the region and will be far enough away from the parks to prevent significant impacts.

“There’s nothing particularly different about this lease sale, other than the fact that the environmental groups are talking it up. All the leases are outside the boundaries of the parks, of course, most many miles away,” said Kathleen Sgamma, president of the Western Energy Alliance, which represents oil and gas producers operating on federal lands.

Energy companies developing leases closer to park boundaries will be required to access minerals only from afar and will be prevented from disturbing the land’s surface, she said.

The parcels nominated for leasing were included in a master leasing plan for the region, which was approved by the Obama administration and underwent public comment, she said.

“So once again, the environmental groups are complaining about leasing on lands that have undergone multiple rounds of public comment and are designated appropriately for leasing with environmental protections,” Sgamma said.

Conservation groups say they don’t expect energy companies to begin drilling and exploring on the land near Utah’s national parks soon if the land is auctioned this year. But future higher oil prices could drive interest in exploring for fossil fuels on leases near the parks, Landon Newell, a Southern Utah Wilderness Alliance staff attorney, said.

“We’ve seen very little development over the past four or five years. That’s going to continue with the low prices,” Newell said. But new leasing “makes it harder for these areas to get protected.”

Anyone can nominate federal land for oil and gas leasing, even anonymously. Once the land is leased, the leaseholder has 10 years to develop it, according to BLM regulations.

“The scale of leasing that industry is asking for right now, especially during a time when demand is collapsing for oil and gas—the industry is looking to lock up a large amount of public lands adjacent to two of the nation’s most iconic national parks,” said Erika Pollard, National Parks Conservation Association’s Southwest region associate director.

The details of the September lease sale haven’t yet been made public, but McGann said BLM officials informed Grand County and the city of Moab that up to 150,000 acres of nearby federal land could be auctioned to oil companies in September. The National Parks Conservation Association estimates the acreage to be closer to 110,000 acres—roughly equivalent to the land area of New Orleans and larger than Arches itself.

McGann said some oil development nearby benefits the county if it is placed in a way that doesn’t affect tourism and the environment.

“If it’s done correctly in the appropriate place, it’s really helpful to our county,” McGann said. “I think it could be done well, but when you look at that map, it just sends chills up your spine.”

Recent oil and gas lease sales in the region held since the oil price crash in March have yielded mixed results.

A March 10 auction for parcels in northeast Utah’s Uintah Basin resulted in most parcels selling for the minimum possible bid—$2 per acre. Land west of Rocky Mountain National Park auctioned in a March 26 Colorado lease sale received no bids at all.

Most of the land between Arches and Canyonlands national parks nominated for leasing this year was named by Prairie Hills Oil and Gas LLC, a North Dakota company whose address is a Big Lake, Minn., residence co-owned by Craig Larson and Marhya Fasching. Both are listed as attorneys at Sheridan, Wyo., law firm Oram & Houghton PLLC.

“I don’t have much to offer at this time, but maybe as the months progress I can say more,” Larson said May 5.

When asked if he expects the land near Arches and Canyonlands to be included in the September BLM lease sale, Larson said he hopes so, “but BLM is the decision-making authority on that.”

To contact the reporters on this story: at bmagill@bloombergenvironment.com; in Washington at akessler@bloombergindustry.com