A water filling station on the Navajo Nation in Arizona.
Photo courtesy of Nikki Tulley

Navajo Nation resident Percy Deal hopes that federal coronavirus relief, coupled with $2.3 trillion for infrastructure in the American Jobs Plan, will give him something his grandparents and even his parents didn’t have—running water in his home.

President Joe Biden’s infrastructure plan is calling for the investment of $111 billion to modernize water systems, including $56 billion in grants and low-cost flexible loans to states, tribes, territories, and disadvantaged communities across the country.

Nearly half of the households on tribal lands throughout the nation—about a half a million people—lack access to reliable water sources, clean drinking water, and basic sanitation. Advocates roughly estimate that about $10 billion would be required to entirely solve the problem of access to water on tribal lands.

It remains to be seen how much of the needed amount for clean drinking water in Indian country will be included in the eventual legislation. But Native American officials and advocates say the potential funding represents an historic investment in new and existing tribal water infrastructure. It’s given them renewed hope for the capacity to lay pipes, drill wells, dig canals and repair water systems.

“We’ve been waiting for water for more than 50 years,” Deal said. “We never knew when we were going to get water, until now.”

Projects would help fulfill, at long last, historically unresolved tribal water rights claims and underutilized water rights, advocates say. But most importantly, it would get water to Native Americans.

Deal’s house has no indoor bathroom nor a proper kitchen. Because he has to haul water in 55-gallon drums from a well 20 miles distant, he uses the same water six or seven times for personal cleaning, cooking, and washing dishes. An outhouse sits about 100 yards away—a cold trip in the dead of winter.

Deal and about 50 of his neighbors are submitting grant applications to the Indian Health Service through the Navajo Nation to get some of the federal money to add kitchens and bathrooms with working faucets.

The tribe would drill wells deep underground into the Navajo Aquifer. Though it has been the tribe’s historic water supply, coal mining operations in the region sapped the aquifer, making it harder to access, and causing seeps and springs to run dry.

Native American officials and advocates say the delivery of actual water to tribes—what they refer to as “wet” water, not just commitments on paper—is a matter of environmental and socioeconomic justice.

“It’s appalling that America is such a rich country, and yet has tribal members who have to go buy bottled water or truck in water to their homes like in an underdeveloped country,” said Zach Frankel, executive director of Utah Rivers Council, an environmental group in Sandy, Utah. 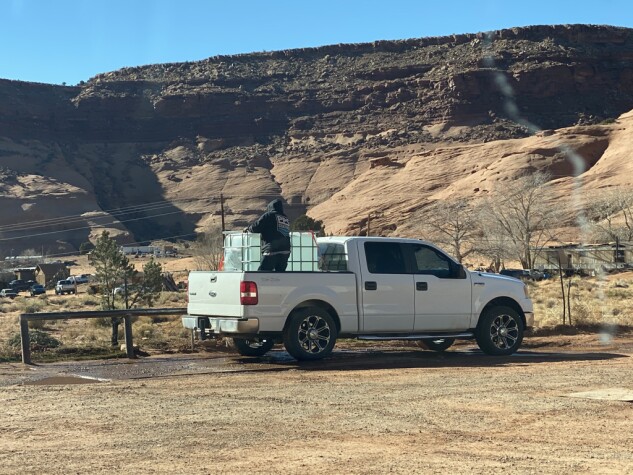 Clean water has become a matter of life and death, with lack of access to clean water one of the statistically significant indicators of high Covid-19 rates, said Bidtah Becker, an associate attorney with the Navajo Tribal Utility Authority.

From January to June 2020, Native Americans and Alaska Natives were three to five times more likely to be diagnosed with Covid-19 than non-Hispanic whites, and their mortality rate was almost twice as high, according to the Centers for Disease Control and Prevention.

“Building out clean drinking water to homes is a health and human rights issue, and with Covid-19, it’s also a social justice and racial equity issue,” Becker said.

Tribes may have confirmed water rights they aren’t fully utilizing because the infrastructure required to develop that unused portion isn’t there, said Anne Castle, senior fellow at the University of Colorado law school and a former Interior assistant secretary for water and science.

“There’s a lot that goes into the settlement of tribal water right claims, but the tribes shouldn’t be required to resolve all those different issues before they get drinking water to their people,” she said.

A resolution in Congress reflects that idea, she said. The resolution, introduced March 25 by Sen. Michael Bennet (D-Colo.) calls for a “whole of government” approach and the creation of an interagency task force to remove barriers and optimize funding to provide water infrastructure for tribes.

The tribes along the Colorado River currently have rights to divert about 20% of the basin’s annual average water supply, which is under enormous strain because of prolonged drought and climate change in a region that supplies water for about 40 million people, Frankel said.

States and tribes in the basin will need to avoid conflict as they balance Indian water needs and existing and proposed uses of non-Indian water, he said.

“Nobody wants litigation to ensue because if it goes through the courts, it’s risky,” he said.

The new federal funding will be a good thing for the states as well as the tribes, said John D’Antonio, New Mexico’s state engineer.

About $500 million in funding is still needed for the $1.36 billion Navajo Gallup Water Supply Project, a major infrastructure project to serve the annual water needs of 250,000 people by conveying water from the San Juan River to the eastern section of the Navajo Nation, he said.

The hope is that the timing of funding decisions by the federal government won’t set tribe against tribe, said Manuel Heart, chairman of the Ute Mountain Ute Tribe in southwestern Colorado.

“We don’t know how these funds are going to be granted,” he said. “It will probably depend on who has the most shovel-ready project. If you don’t have an environmental plan and design, that takes more time, and you fall farther behind.”

While those details are getting sorted out, Deal and his neighbors are excited about the prospects of getting water at long last.

“I’m very grateful for it,” he said. “People around here are going to be very happy when they turn on that faucet and the water comes out.”