A fitness center employee in Belgium uses a device that measures the air quality on June 1.
Photographer: Luc Claessen/Belga/AFP via Getty Images

Harmful indoor air quality has been listed as one of the top five environmental risks to public health, according to Environmental Protection Agency comparative risk studies. Yet there’s no comprehensive regulation that addresses those harms outside of a patchwork of protections and standards of care.

“Climate change and the Covid crisis are certainly helping to bring that more into the public consciousness and into the consciousness of policymakers,” he said.

The Biden administration’s increased focus on environmental justice also raises the ante on a pollution issue that disproportionately affects low-income communities, others say.

Indoor pollution sources including adhesives, mold, manufactured wood, and cleaning supplies can contribute to short- and long-term illnesses like asthma in concentrated doses. People living and working inside inadequately ventilated buildings can also experience “sick building syndrome,” which results in nausea and dizziness.

WHO has set minimum standards for indoor air pollutants, such as benzene and carbon monoxide, while some European Union countries like France and Germany have taken steps to draft legislation or national plans for indoor air quality.

Other countries “take the science a little bit earlier out of the gate and put it in policy, and we tend to take 20, 30, 40 years,” according to Gillian Mittelstaedt, executive director of the Tribal Healthy Homes Network, an organization that advocates for healthy indoor air in tribal communities.

“The current problems are different,” he said. “And either the Act must be reinterpreted or changed or evolved to be able to include the sources that are of growing importance.”

Indoor air quality advocates continue to push for better protections, including through better model standards that can be adopted into building codes.

“One of the best things we can do to improve things is to raise minimum standards by however much we can,” said William P. Bahnfleth, an architectural engineering professor at Pennsylvania State University.

Advocates are hopeful that increased funding for research, more robust guidance, and the adoption of local solutions could also ease the burden.

“The solution is going to be multi-pronged; there is no silver bullet,” Mittelstaedt said. 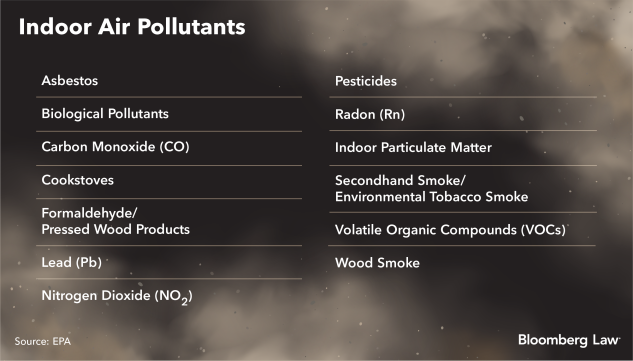 Unlike emissions spewed from smokestacks on industrial facilities, agencies like the EPA don’t have broad regulatory authority to address indoor pollution.

This leaves an issue-by-issue collection of building code thresholds and chemical regulations, such as asbestos mitigation through Toxic Substances Control Act or other programs like the National Radon Action Plan targeting carcinogenic radon.

Congress has occasionally taken up the mantle, including with the Indoor Air Quality Act of 1991, which tasked the EPA with research and programs geared towards mitigating indoor air pollution. That bill died after passing the Senate.

“We have the science to develop exposure limits, guidelines, or standards,” Mittelstaedt said. “The implementation issue—both as a practitioner, how you would do that, and as a regulator, how you would achieve that—are some major questions in front of us.”

Part of the challenge is that— despite ample research connecting improved health outcomes with indoor air quality—no targeted mechanism exists to measure the harmful effects of daily pollution exposure on things such as day-to-day productivity indoors, Bahnfleth noted.

Some home builders and construction companies also have pushed back on more complex requirements that add time and costs to construction.

The National Association of Home Builders opposes increased ventilation rates that could add costs and trigger additional requirements, according to Craig Drumheller, the organization’s assistant vice president of construction codes and standards.

“NAHB supports changes to the building code that clearly demonstrate a cost effective benefit, and we do not believe that many of the new ventilation requirements have met that test,” he said in a statement.

The EPA has to “walk a fine line,” Sherman noted, because while indoor air pollution is an issue for the agency, it can’t craft standards.

The Department of Housing and Urban Development, too, is faced with the challenge of balancing indoor air issues while not making affordable housing more expensive for Americans in the face of higher building costs.

Builders also can adopt voluntary EPA thresholds such as Indoor airPLUS, which lays out construction specifications that reduce exposure to indoor emissions from building materials.

“We’re making steps towards getting this right, but there’s a long way to go,” Sherman said.

State and local building codes fill some of the gaps left by the lack of federal authority, but advocates want more than the bare minimum.

States such as California have adopted model standards into their codes for non-residential buildings. Other states leave standards adoption up to local governments, and many states don’t adopt any at all.

Those model codes can include guidelines from the International Energy Conservation Code, or standards of care for indoor ventilation set by the American Society of Heating, Refrigerating and Air-Conditioning Engineers—known as ASHRAE. Even those could use some re-working, experts said.

“What almost none of them require is that you consider the outdoor air,” said Sherman, who sits on the ASHRAE residential ventilation committee. “That is, if you live in an EPA non-attainment area, you don’t have to do anything differently, and that’s one of the things we’re working on.”

This is especially true for low-income communities living in urban heat islands, who can be forced inside homes with poor ventilation on hot days or after extreme weather events.

“The drive to address indoor air should be coupled with attention to the EJ communities, because those are the people who are going to have the least protected indoor environment,” Mittelstaedt said.