President relied on short-term regulations with significant economic impact to achieve key policy aims in the first year of his presidency—even as federal judges ruled he didn’t have the power to write those rules.

Without a working majority in Congress, the president turned to temporary rules to rapidly meet his pandemic goals in particular. He approved 19 temporary rules, a total that exceeded even his regulation-friendly former boss according to Bloomberg Government’s analysis of the White House Office of Information and Regulatory Affairs’ work logs.

The list of short-term regulations includes his vaccine-or-test mandate for the private sector and mask requirement in certain preschools.

There is pressure on the president “to adopt rules and regulations to do what Congress can’t or won’t,” said Kristin Hickman, a University of Minnesota law professor who specializes in administrative law.

Biden is expected to unveil his fall 2022 regulatory to-do list sometime this summer. Here are three takeaways from Bloomberg Government’s analysis of Biden’s regulations in 2021. 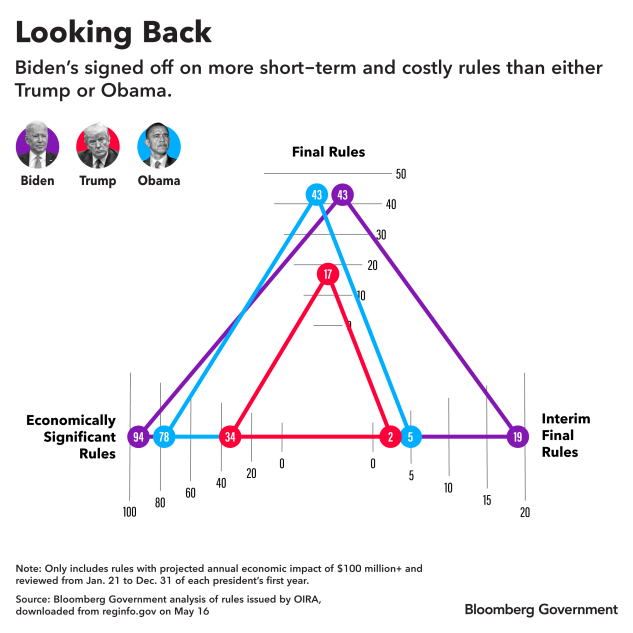 Biden’s regulations are projected to have a hefty impact on the economy.

Biden projected that roughly a third of his rules would have an impact on the economy of at least $100 million.

That isn’t necessarily because Biden faced mounting inflation in his first year, driving up the perceived cost of his regulations, said Susan Dudley, who led the White House regulations office under President .

The regulations office sometimes groups rules that will significantly alter the environment, public health, or safety in the same category as those with an $100 million or more impact on the economy. He signed off on 15 proposed and final rules written by environmental agencies, according to Bloomberg Government’s analysis.

Biden also looked to the Department of Health and Human Services to write rules to slow the spread of the virus. The department, regardless of who is in the White House, tends to publish more rules projected to have an outsized impact on the economy. 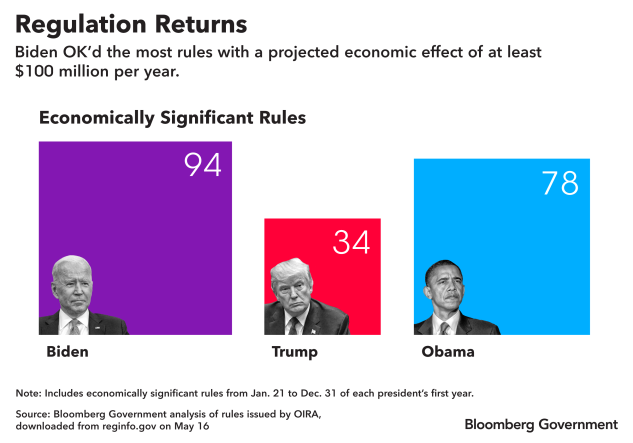 The list of rules expected to have a large effect on the economy doesn’t include some of Biden’s most divisive regulations, including one that would undo a Trump administration rule barring abortion referrals and another that would crack down on homemade firearms, known as ghost guns.

The ghost-gun proposal elicited more than 290,000 letters from individuals and advocacy groups across the country, according to data from the General Services Administration.

Biden relied on short-term rules to respond to the pandemic.

Obama’s short-term regulations included pay limits for senior executives at companies that received stimulus funding and revisions to how the federal government supports low-income college students. Trump approved short-term rules on how restaurants should display calorie counts and another to comply with a court’s decision on veterans’ emergency care.

Biden also published 43 final rules. Among them: a requirement that restaurants pay tipped workers more for side work, sanctions against the military regime in Myanmar, and limits on tailpipe emissions. The emissions rule inspired nearly 189,000 letters from the public as of mid-April. 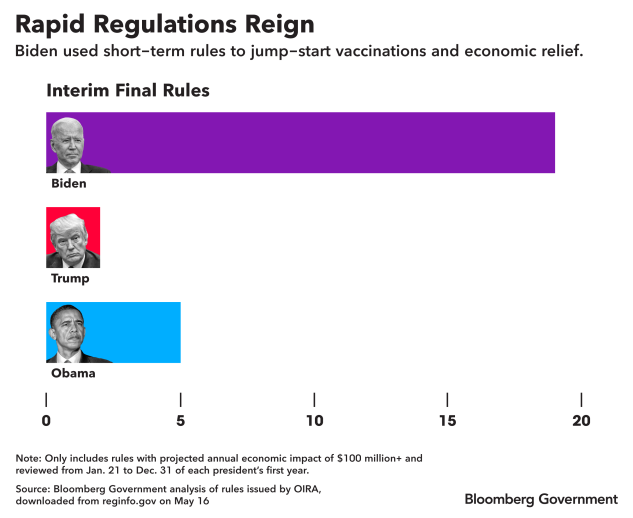 Courts pushed back on Biden’s authority.

Trump-appointed judges struck down a few of Biden’s most controversial rules, including his pause on evictions, vaccine-or-test requirement, and mask mandate on trains. The judges said federal agencies didn’t have the authority to write those regulations, adding that Congress hadn’t given them express permission.

The Supreme Court is poised to give conservatives a new tool to further limit the power of federal regulatory agencies, after coal-mining companies and Republican-led states said the environmental regulators exceeded their authority to control greenhouse gas emissions. The high court has yet to decide on the case. The result could reduce how much power presidents have in future crises.

“Over the last several decades, we’ve gotten used to governing through” federal agencies, said Carmel Shachar, a Harvard health law professor. “The recent court cases indicate that we’re entering an era that is going to walk that back.”

To contact the reporters on this story: in Washington at crozen@bgov.com; Jonathan Hurtarte at jhurtarte@bloomberglaw.com