Pointe Coupee Parish Councilman Edward "Pop" Bazile stands on a levee between a drainage canal and the homes of the Pecan Acres neighborhood of New Roads, La., on Sept. 12, 2019. Bazile is helping the neighborhood's mostly elderly residents navigate a state and federal project to relocate from their frequently flooded streets to a new development on higher ground.
Photographer: Jennifer Kay/Bloomberg Law

In Louisiana’s blueprint for managing the impacts of climate change, the cities of New Roads and Gonzales would seem well placed as refuges for coastal residents projected to lose their homes to rising sea levels.

New Roads is roughly 80 miles inland from the Gulf of Mexico. Gonzales sits about 60 miles from the coast. Both cities have little risk of storm surge when hurricanes threaten, and their elevation or levees would seem to protect residents from inundation.

Yet rising waters have become so routine and damaging in parts of those cities that the state and federal governments are taking the radical step of abandoning entire neighborhoods to nature. They’re buying out and moving approximately 80 households, a sign of what may be required of inland communities as drainage systems fail under heavier and more frequent rains triggered by climate change.

“We’ve continued to encroach on the flood plains, we’ve continued to put impervious surfaces out there as we develop, and all of those things lead to increased risk of flooding,” said Pat Forbes, executive director of the Louisiana Office of Community Development. “If we’re going to adapt to reduce risk in the future, it’s going to be a constant process of getting us developing in safer places and increasing rather than decreasing the natural function of the flood plains.”

All residents of two low-lying neighborhoods frequently trapped by runoff pouring into streets and homes—the Pecan Acres subdivision on the outskirts of New Roads, and Gonzales’ Silverleaf neighborhood—have accepted buyouts similar to those now being offered in coastal areas after hurricanes. 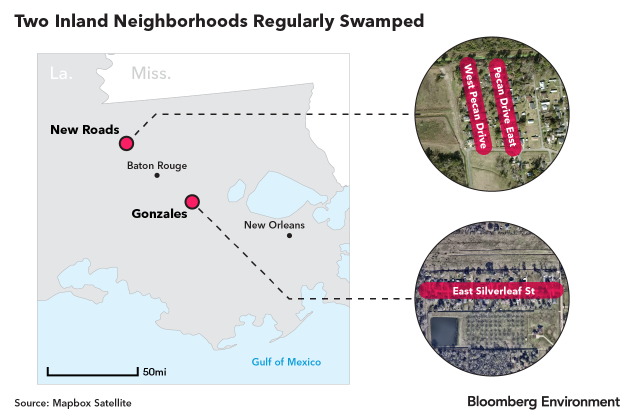 The money for the move, just under $20 million, is coming through the Louisiana Office of Community Development and the U.S. Department of Agriculture’s Natural Resources Conservation Service.

USDA’s program typically buys flooded farmland and turns it into wetlands. But over the last decade, it has also started buying out inland residential properties, most notably in New Jersey, New York, and Connecticut after Superstorm Sandy in 2012.

Louisiana’s share is a fraction of $1.2 billion in Community Block Grant Mitigation funds awarded after two catastrophic floods in 2016 to reduce the risk of future damage statewide. The Louisiana Watershed Initiative aims to boost public understanding of flood risks, improve watershed management, and shift development out of flood plains.

“But in the meantime, yeah, we’re going to run into a lot more communities like this—that the smartest thing might be for us to help them get to a safer place,” Forbes said.

Surrounded by verdant sugar cane fields, Pecan Acres has flooded 17 times in the last 20 years. It fills at one end with water streaming downhill from the city of New Roads, and at the other with water overflowing a shallow drainage canal.

“Two or three days of constant rain, it’s coming in. It don’t have to be a hurricane. It could be a rainstorm,” said Nakia Jones, whose family is one of about 40 who will be moved out of Pecan Acres into a new development built specifically for them.

The stress of moving will be a welcome change from the constant stress of watching for water filling the two parallel streets that make up the subdivision.

“I guess you could call it a panic attack,” Jones said. “When they say it’s going to rain for more than one day, you’ll be worried. You’ll be pacing up and down, looking out the windows, looking out the doors, because you don’t know if it’s going to stop raining. You can’t sleep because you know one day they’ll be coming knocking at those windows, saying you’ve got to evacuate.”

The water seeps through the baseboards. There have been nights when she has stepped out of bed into water on the floor. After the first couple incidents, her husband started jacking up the sofa, refrigerator, and washer and dryer when they saw water in the street.

“You get tired of buying stuff over and over,” Jones said.

On East Silverleaf Street in Gonzales, knee-high walls of sandbags ring Amy West’s home and a handful of others year-round, just in case it rains.

Shortly after West moved with her family into the newly built Silverleaf neighborhood in 1988, street flooding trapped them in the house. 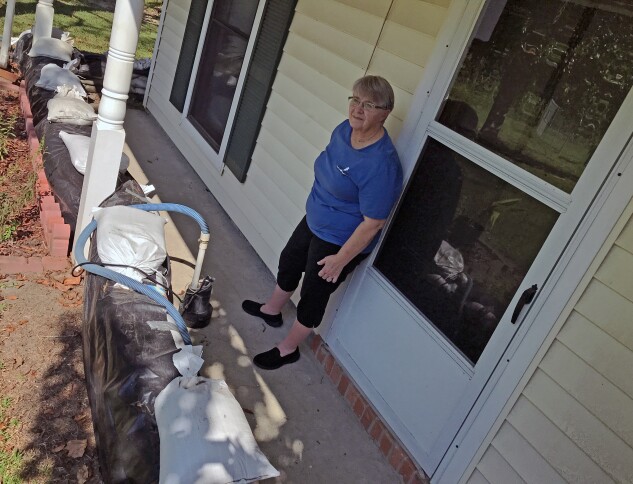 Amy West stands near the pump and sandbags she keeps outside her Gonzales, La., home year-round on Sept. 12, 2019. The barrier helps protect their home when poor drainage sends water from a nearby development running into the Wests’ Silverleaf neighborhood.
Photographer: Jennifer Kay/Bloomberg Environment

“We looked like we were living on an island,” West said.

In 1992, when Hurricane Andrew hit Louisiana, the water flowed into the house. They replaced their floors after a 2014 flood, and they gutted the house in 2016 after two separate storms flooded swaths of Louisiana twice in the same year.

“All they had to do was build these houses up six inches. Six or seven inches, and it would not be a big deal,” West said.

Given the amount of flooding and repairs needed in Pecan Acres and Silverleaf since their construction, it’s clear the developments should never have been built in those locations, said Kevin Norton, acting associate chief of the Natural Resources Conservation Service.

And it’s increasingly clear that communities nationwide—built around drainage systems that encroach on a floodplain, along with settlements near rivers and streams—are going to find themselves under water more often, he said.

“Climate does have a lot to do with it, because we are getting a lot more rain, a lot harder, and it stays in the same area for a longer period of time, which causes the area to flood,” said Pointe Coupee Parish Councilman Edward “Pop” Bazile, who represents the Pecan Acres neighborhood.

“Everybody was trying to chase the dream of homeownership, not knowing they were going to get in a situation like this.”

Before planning their buyout, Gonzales officials studied ways to reduce the impact of water flowing down from another nearby development into the homes of West and 40-some neighbors. But building a levee or installing a pump was too expensive, and would have adversely impacted neighboring communities, said Baumann, the chief engineer.

Abundant housing options in Ascension Parish made a total buyout the best option for the Silverleaf residents, many of whom are still in debt from previous flood repairs, at a cost of roughly $5 million, she said.

Pointe Coupee Parish, where New Roads is located, lacks affordable housing, so Forbes’ office is buying 22.5 acres of sugar cane fields less than 2 miles north of Pecan Acres to build new homes for the residents. The bill is estimated at $14.3 million, with construction expected to begin in the spring of 2020.

The new development lies outside the 100-year floodplain, and the homes will be elevated over 3 feet to further reduce the risk of flooding. Still, incoming residents will be required to maintain flood insurance costing $450 a year. 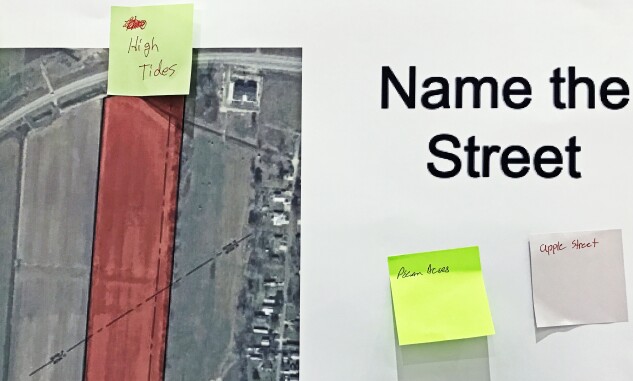 Residents of the Pecan Acres neighborhood in New Roads, La., have been asked to submit potential names for their new subdivision and street. One suggestion at a Sept. 11, 2019, meeting in a New Roads community center was “High Tides,” referring to the frequent flooding over the last two decades.
Photographer: Jennifer Kay/Bloomberg Law

Flood insurance is something Pecan Acres residents gave up long ago, when their premiums climbed to $4,000 to $6,000 a year because of the frequent water damage.

Their current neighborhood was built as sharecropping was ending, when people like Harold Terrance scrambled to find somewhere to live beyond the plantations that had dominated the parish for generations. Terrance was in his early 20s and a first-time homebuyer when he purchased his one-story home in the early 1970s.

“I was glad to get it because I didn’t have nowhere to go,” he said.

The flooding started a couple years after he moved in, he said. He learned to watch for water in the street at the neighborhood’s entrance—a sign to lift furniture and appliances up onto cement blocks to keep them dry. The Red Cross handed out mops after each flood. The Federal Emergency Management Agency helped them again and again—until residents could no longer afford the flood insurance required to obtain the agency’s assistance.

“It was great because FEMA helped us out for years and years and years,” Terrance said. “And now we’re at the point where they say, ‘We’ve helped enough. We’re not going to do this.’”

The new homes for the Pecan Acres residents aren’t scheduled for completion until spring of 2021. Jones doesn’t feel good about leaving her home. But she feels even worse about the times she stepped out of bed into rising water.

“I can’t wait to be on dry land, because this is not dry land,” Jones said. “Like what they say—when it rains, it pours.”

To contact the editors responsible for this story: at bkohn@bloomberglaw.com; at ayukhananov@bloombergenvironment.com