A pipe can be seen peeking out of the rubble of a house that burned in this neighborhood in Paradise, California. Nearly 19,000 buildings burned and some of the homes left standing must now deal with water supplies contaminated with the compound benzene, a carcinogen.
Photographer: Emily Dooley/Bloomberg Environment

From all that destruction, a mysterious threat has emerged for those who appeared to have gotten by unscathed: household water supplies with concentrations of toxic benzene—including one sample that had 923 times what the state considers safe.

More than nine months after the fire, the Paradise Irrigation District still has a “do not drink” order unless individual parcels have been cleared. Even baths are discouraged, according to a district advisory. State and federal officials say they don’t know what’s causing the contamination, how severe it may be, and how long it will last. Nor is there a clear pattern.

And the problem could become more common as wildfires intensify and spread with a warmer climate or more intense drought.

“I’m worried pipe contamination after wildfires may be a new horrible normal we have to deal with,” said Gina Solomon, a clinical professor in the Division of Occupational and Environmental Medicine at University of California, San Francisco.

Benzene, a sweet-smelling, colorless chemical, can cause anemia, immune system issues, and leukemia. It was also detected coming from tap water in standing homes after the October 2017 Tubbs fire in Santa Rosa, though the contamination was small by comparison.

Acting on a complaint of foul-smelling water, Santa Rosa Water tested supplies one month after the fire and quickly advised people at 13 homes in two areas not to drink the water because benzene and other contaminants had been detected. Benzene had never been documented in the system before.

“That’s when we started realizing, wow, has this been happening before and nobody realized it?” said EPA toxicologist Bruce Macler, who is on loan to the State Water Resources Control Board helping with fire response. “It could have happened in any house fire. There is still a lot of hypothesis and we have not gotten the research to settle this.”

‘Have to Look Everywhere’

One part per billion, which is California’s safety standard, is equal to one drop of water in an Olympic-sized swimming pool. The standard is roughly based on possible ill effects on a person drinking two liters of water a day over 70 years with that trace amount of contamination.

“The benzene is showing up all over the place but not in one place and not consistently,” Macler said. “It’s very difficult. You basically have to look everywhere.”

At first officials thought the contamination in Santa Rosa came from the heat of the fire breaking down underground plastic pipes made of PVC, Macler said. But Camp’s destruction and the accompanying benzene contamination also hit metal, copper, and galvanized pipes.

One theory is that water systems became depressurized during the fires, sucking hot gases and ash into supply systems. That happened in both the Tubbs and Camp fires but not in the Carr fire, which burned nearly 230,000 acres in the summer of 2018 without producing benzene contamination, said Dan Newton, an assistant deputy director in the division of drinking water at the state water board.

State officials recommended water supplies be tested after Carr based on what happened in Santa Rosa with the tubbs fire. 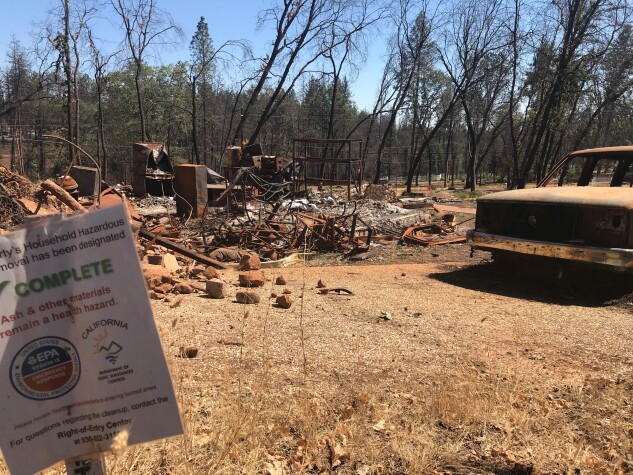 A burned out lot on the outskirts of Paradise, California, where a deadly wildfire burned in 2018. Benzene, which has been linked to cancer, contaminated some of the water supplies of homes that did not burn.
Photographer: Emily Dooley/Bloomberg Environment

About 2,100 homes in both Paradise and Del Oro are still standing. But authorities in the two districts have taken different approaches. The Del Oro Water Company is testing water in homes. Paradise is also testing but stopping at the water mains and laterals before pipes branch off into homes, state officials said. The state can’t order testing but did issue guidance if residents want to have their water tested.

Paradise said lateral pipes that connect water mains to individual properties is the most likely place for contamination and on Aug. 29 the district said it intends to replace all of those to burned lots. Nearly half of the laterals tested on burned lots tested positive for benzene and the district said no more testing is needed to justify the replacements.

Macler and state officials said the flushing of water lines appears to be eliminating the benzene hazard. Health regulations are meant to be conservative, Macler said, and utilities issuing the “do not drink” orders are being abundantly cautious. The quantities left in the water are “way too low to be causing a health issue,” he said.

But Andrew Whelton, an associate professor of Civil Engineering and Environmental and Ecological Engineering at Purdue University, said guidance issued by the state for testing water is designed to not find contamination.

Whelton and his team has been advising Paradise Irrigation District and holding community meetings. But at the state level, he’s seen as a too-cautious academic who is confusing people.

“He wants to be more robust and we’re trying to be more pragmatic and understanding,” Newton said.

The state guidance suggests testing water from the kitchen sink that has been sitting at least eight hours. Whelton said that is not long enough and covers only cold water, not hot, which comes from different pipes. He thinks multiple points in the house should be covered for multiple contaminants.

The state testing could miss benzene and other volatile or semi-volatile organic compounds, he said.

“It was not driven by health and safety,” Whelton said. “There’s been a pretty substantial push from the state level to wash away and kind of drown out any detections, other than benzene, that doesn’t fit the narrative.”

The state said Whelton’s proposal is too costly for a problem that’s not severe, given that people aren’t supposed to be drinking the water until its cleared. The guidance also suggests people run their hot and cold water lines for at least five minutes if they are concerned. And officials say benzene levels are a good indicator of whether other contaminants exist.

“We feel that this is protective of public health and easy enough for a homeowner to do,” Newton said. “If it does come up on a kitchen sink you may want to test more.”

Marilyn Valva, who moved with her family of eight to nearby Upper Magalia 6 1/2 months before the fire, is unsure enough about the water and other possible environmental damage that she and most of her family have stayed away from what was supposed to be their retirement dream home.

“There’s been a lot of back-and-forth about the water, about if it’s good or it’s not,” she said.

“Nobody there drinks the water,” Valva said of her family. “They take very short showers. I highly doubt that it is good. I don’t even think it’s good to be living there.”

Valva was told to have her water sampled but she’s fighting with insurance over covering previous environmental testing and other issues, including her insurer going bankrupt. “That fire just came along and just ruined so many dreams for so many people,” she said.

Water suppliers are watching with a wary eye. It’s a relatively new, but growing concern, though the extent of that worry varies among systems depending on geography and type of pipes, said Heather Engel, spokeswoman for the Association of California Water Agencies, which represents public water suppliers that serve roughly 90% of the state.

“Fires are now more destructive, they cover larger areas (including spreading into urban areas with infrastructure) and, in some case, burn a lot hotter,” Engel said.

Solomon, from UC San Francisco, intends to find some answers through a study funded by a National Institute of Environmental Health Sciences grant.

The first phase launches this month and requires testing tap water at 10%—or about 175—of the standing homes in the burn area for 32 chemicals, including benzene. Carbon filters, which remove benzene, will be installed on taps with elevated levels of contamination and those filters will be analyzed in a lab.

“It’s going to give us a really broad net,” she said.

The mystery needs to be solved, Macler said.

“What we really want to do here, other than keeping people safe, is figure out exactly what is going on because [we’re] in California and with the next fire, we’re going to be asking the same questions.”