Springtime is a difficult moment to puzzle out what the ongoing economic shutdown means for global warming. Carbon-dioxide levels always drop throughout the spring and summer in the Northern Hemisphere, as hungry plants absorb the primary greenhouse gas. This seasonal effect is occurring as pandemic lockdowns have stopped billions of people from driving and working, slashing fossil-fuel use and lowering carbon-dioxide emissions.

“If we were to continue like this for months, instead of weeks, we will see a drop in carbon emissions that we haven’t seen in my lifetime,” said Rob Jackson, a professor at Stanford University and chair of the Global Carbon Project. “And probably since the end of World War II. That’s where we’re heading.”

But even a sustained decrease in new emissions this year—under a scenario in which the ongoing economic collapse is more severe than the 2008 recession—would have little impact on the level of CO₂ in the atmosphere. In fact, CO₂ levels will almost certainly continue to rise.

Looking at the major trackers of atmospheric CO₂ concentrations shows the consistent, clockwork turn of the Earth’s carbon cycle. The number goes up over time but falls slightly under the seasonal influence. Scientists measure the atmosphere’s CO₂ concentration in parts per million, or ppm. Right now, CO₂ makes up about 415 ppm of the atmosphere. That’s up from 280 ppm in the 18th century, before industrialization. The higher the CO₂ count goes, the more dangerous climate change becomes. 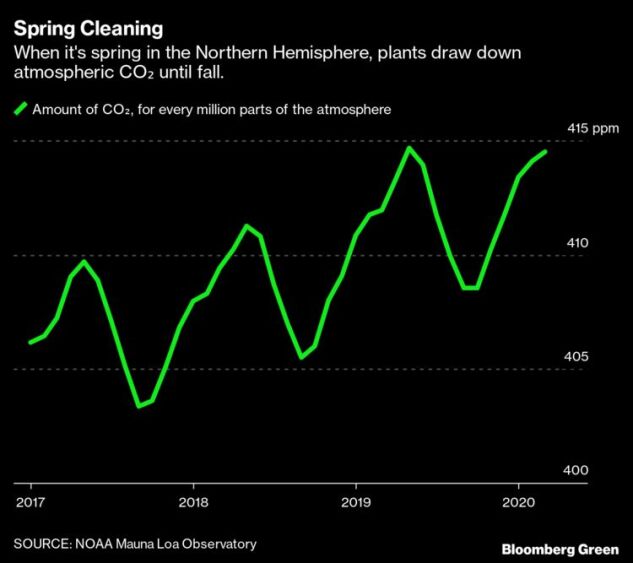 These readings of CO₂ concentration—what stays in the atmosphere for the long haul—are different from CO₂ emissions, or the amount of gas that leaves power plants, vehicles and other sources of pollution. What we know of the impact of the pandemic on global emissions is in incomplete, with rough estimates from some of the earliest hit nations. Not long after China began to close down economic activity because of Covid-19, analysts began to estimate how much climate pollution would be prevented due to quarantines. The conclusion so far: about 25%, and only temporarily.

The collapse in emissions has moved around the globe with the new coronavirus. Over the last two weeks, analysts at BloombergNEF found electricity demand at 17% below normal in the U.K., 23% lower in Italy, and down by 15% in New York City. Air pollution in the U.S. Northeast dropped 30% in March. The U.S. Energy Information Agency forecast that emissions from cars, power plants and other sources may fall an unheard of as a result of people sheltering at home.

These snapshot views of individual sectors within individual countries can’t add up—just yet—to a global statement about the amount of CO₂ emissions from 2020 that will end up lingering in the atmosphere. Watching CO₂ levels rise and fall, with the impact of the pandemic overlapping normal seasonal variation, only explains part of this uncertainty.

Most of the CO₂ people emit every year doesn’t stay in the atmosphere. Just 45% stays airborne, about 30% goes into land ecosystems, and another 25% sinks into the oceans. There’s still randomness in the amount of annual emissions that end up in the atmosphere, which depends not only on pollution but how well or poorly the rest of the planet is absorbing it. Scientists have become increasingly concerned that tropical forests are losing their ability to take down as they have in the past. 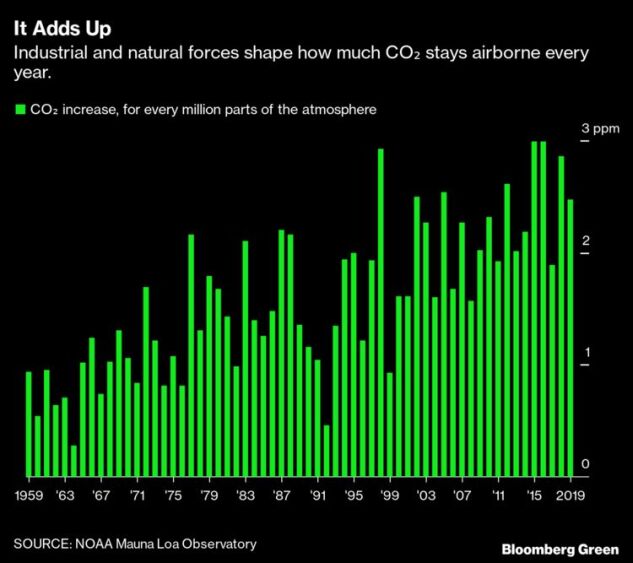 Routine help from the land and sea makes it very difficult to know how the year in emissions will end, even when the first three months appear to have lower pollution than normal. Only a sustained year-long drop in global emissions of about 10 percent would clearly show up in CO₂ concentrations, according to Ralph Keeling, a geochemist at the Scripps Institution of Oceanography. Even previous economic cataclysms, such as the 2008 financial crisis and the collapse of the Soviet Union, have failed to show up in the CO₂ readings taken at Hawaii’s Mauna Loa, which began keeping records in 1958.

The CO₂ count has been rising by an average of almost 2.5 ppm a year since 2010. Even a significant cut in emissions from 2020 wouldn’t do much to dent this dynamic. Pierre Friedlingstein of the University of Exeter estimates that a 10% drop in annual emissions would still translate to an increase of 2 ppm in the CO₂ count.

Keeling likens climate pollution to water flowing into a bathtub. If less water starts flowing, it’s easier to judge by diminished strength at the tap than in the slower rise in the tub itself. With CO₂, it’s easier to notice emissions fall from factories, cities or even entire countries than it is to detect a decrease in the atmosphere.

To contact the author of this story:
in New York at eroston@bloomberg.net

To contact the editor responsible for this story:
at arutkoff@bloomberg.net