Germany’s green energy shift may get a financial shot in the arm when the impact of the coronavirus ebbs, according to a senior member of Chancellor ’s cabinet.

When the virus’ acute phase is over, the government plans a stimulus package that advances the nation technologically and helps the economy’s move toward climate neutrality, Finance Minister said in an with Funke Mediengruppe. Such a package “makes sense,” said the Social Democrat without adding details.

Such a move would allow Germany, Europe’s biggest emitter of greenhouse gases, to exploit a positive environmental quirk of Covid-19’s affect on the economy: plummeting CO2 emissions, said Patrick Graichen, executive director of the Agora Energiewende think tank in Berlin.

“What counts for the climate is sustainable reduction in emissions, not a one-time drop,” Graichen said by phone. “We need a green growth and investment program fast. For sure, once the crisis is over, emissions will soar again.”

To make an impact, a green stimulus program should be of the order of 100 billion euros ($108 billion), said Graichen.

Europe’s biggest economy may slump by 5% this year, according to the government. That’s an ironic boon to the output of pollution and will allow Germany to over-achieve its goal of cutting carbon emission 40% from 1990 levels by the end of the year, according to Agora.

Germany was set to miss the target after pushing down emissions by about 35% in 2019. Agora estimates that it may reduce emissions by as much as 45% by December.

The drop in CO2 has a negative side. Prices for pollution certificates in the European Union’s emissions trading system have fallen almost a fifth this year as measures to deal with the coronavirus cripple the region’s economies. Emissions in the European market are seen dropping another 15% this year after falling almost 10% last year. 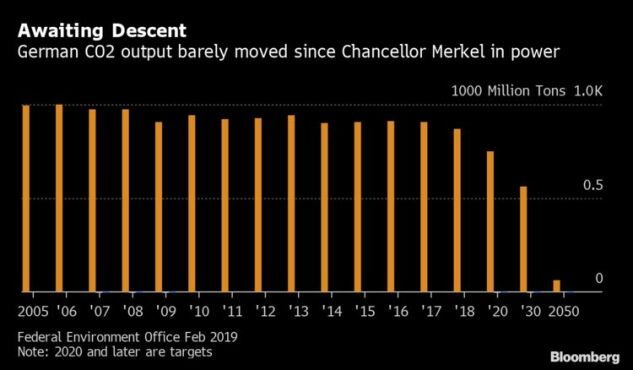 Scholz, the finance minister, some 33 billion euros of revenue from the sale of EU emission permits and from a separate national carbon trading system to help pay for a 54 billion-euro climate-action plan rolled out by Merkel last year. The anticipated revenue may need to be recalculated if permit prices remain in the doldrums.

To contact the editors responsible for this story:
at landberg@bloomberg.net