A man jumps into the water during the Evergreen Polar Plunge at Buchanan Pond in January 2020 in Evergreen, Colo.
Photographer: Jason Connolly/AFP via Getty Images

Plummeting oil and gas tax revenues and a state budget thrashed by the coronavirus pandemic means water projects in Colorado are facing a financial double-whammy.

And the odds are long that sports gambling—which launches in the state Friday and was supposed to provide supplemental funding for water priorities—will provide any short-term rescue, state water and gaming officials say.

The projected funding shortfalls are forcing state officials to “get creative” as they seek to shore up the state’s water supplies and protect the environment in the face of longer-term problems that stretch beyond the pandemic: drought, climate change, and burgeoning municipal water demand.

The state’s population, which was 5 million in 2015, is projected to double over the next three or four decades, according to estimates in the Colorado Water Plan. That plan, finalized in 2015, is meant to deal with the state’s long-term water issues in a sustainable way. It needs $100 million annually, or $3 billion by 2050, starting this year.

That amount of funding is unlikely to materialize, in part due to looming budget and revenue shortfalls, which could affect the plan’s roadmap for protecting the state’s water resources and addressing future water needs, including a projected supply-and-demand gap.

The plan calls for water conservation and efficiency programs, land-use projects, sustainable agriculture programs, new water storage, watershed protection plans, and programs to increase education, innovation and outreach across Colorado state’s eight river basins, among them the state’s portion of the Colorado River Basin, the water source for more than 40 million people in the American Southwest.

Programs may need to be reduced or delayed if funding is not available, although it’s unclear what will happen at this stage. Last year the Water Plan received money from the state’s general fund for the first time, although it only got $10 million of a $30 million request.

In addition to the state’s general fund, money for the Colorado Water Plan comes from several sources. The newest source is a 10% tax on net sports betting proceeds to be paid by casinos, which voters approved along with sports gambling in November.

The general fund is facing massive budget cuts in light of plummeting sales and income taxes due to the virus, said Doug Kemper, executive director of the Colorado Water Congress, a nonprofit that represents the state’s water interests.

“The bigger concern is going to be the state budget,” he said in a phone interview on Tuesday. “It’s a much larger issue that will dwarf whatever hit the loss of sports betting revenues will bring.”

The latest estimate from the governor’s office is $3 billion in lost revenue for the current and next fiscal year out of a more than $30 billion budget for the state. The state General Assembly’s Joint Budget Committee will begin meeting again May 4, and a new revenue forecast will be released May 12, Kate Watkins, chief economist with the Colorado Legislative Council, said in an email.

The first year of the sports betting tax wasn’t going to generate a “large sum of money” for the water plan, Rebecca Mitchell, director of the Colorado Water Conservation Board, said. And now, the gloomy picture in the oil and gas industry has hammered severance taxes, another major source of funding for state water projects, Mitchell said. 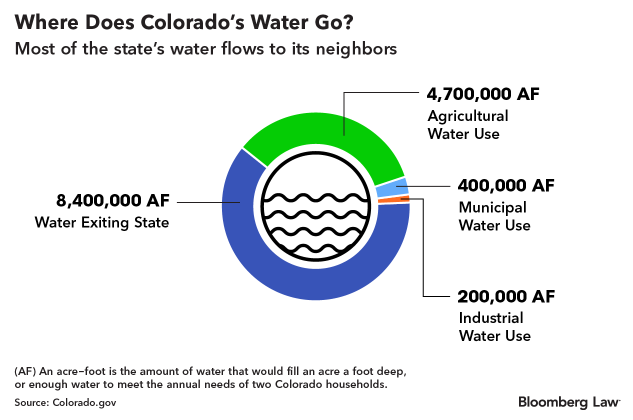 The water board is a cash-funded agency with revenues from principal and interest generated from its Water Project Loan Program, plus revenue from severance taxes and federal mineral leases, Leonard said. In Colorado, severance taxes are imposed at varying rates, but typically 2% to 5%, on the production or extraction of oil and gas, coal, and other minerals. The formula for severance tax distribution allocates 25% to the board, she said.

In March, the picture grew grim as forecasts for severance taxes—which are volatile by nature—dropped dramatically with the oil commodity market. That required anticipated reductions in grant programs for water projects to 46% of funding in fiscal 2020-21, with 0% projected to be available in fiscal 2021-22.

At the same time, the projected revenues from the sports betting tax will be affected by the closure of the state’s casinos and a dearth of live sports to wager on.

A ballot measure approved in November (Proposition DD) legalized sports betting and ushered in the new tax on casinos licensed to offer sports betting. Projections in a pre-election analysis by the Colorado Legislative Council said the tax would generate annual revenue of about $16 million in its first five years, up to a maximum of $29 million a year.

But those estimates were scaled back in November, after the Division of Gaming chopped its sports betting license fees from $125,000, the maximum established by the General Assembly, to no more than $2,000 for master licenses held by casinos, and $1,200 for internet operators, according to a division memo. The division did so after concluding that the initial fee was much higher than casinos would pay.

With that change, the revenue estimates from the tax fell to as low as $1.5 million in the 2021 fiscal year beginning July 1—below the threshold for funds to be transferred to the water plan, which receives any remaining money after other priorities are paid for.

Predictions ‘Out the Window’

Those funds will be even weaker now, in light of the pandemic, although hard numbers aren’t yet available, said Dan Hartman, director of the Colorado Division of Gaming.

“All the things going on right now have completely thrown any of these predictions out the window,” he said.

Hartman said coronavirus concerns caused Colorado to shut down casinos in mid-March in the three gaming towns of Black Hawk, Central City, and Cripple Creek. That means sports betting in the state will launch 100% online.

And that sports betting won’t have Major League Baseball, or the NBA and NHL playoffs, to bet on, with sports games called off due to the pandemic.

“So we’re going to have to make do with what we have,” he said: Table tennis in Russia and China, baseball in Taiwan, and competitive darts in New South Wales.

Gambling providers and state regulators say they believe the revenues will flow in when major sports like football, basketball, baseball, and hockey come back—whenever that happens.

“This situation changes our thought process a lot,” Mitchell, from the Colorado Water Conservation Board, said. “But it highlights the message: We need a long-term funding plan.”