The mushrooming costs of cleaning a toxic fire-fighting chemical out of water supplies are becoming difficult to bear, according to interviews with water utility officials in cities and towns across the country.

As scientists have connected more illnesses to these chemicals, known as perfluorinated or polyfluorinated compounds, many utilities have scrambled to shut down wells and secure alternative sources of drinking water—in some cases incurring millions in unbudgeted expenses.

Some of the utilities that were most affected by this contamination are now asking who should compensate them for these expenses. Should it be the military, the most prolific user of these chemicals? Or should it be the companies that manufactured them: Chemours, DowDuPont, 3M and others?

This question will likely be answered in a court of law, just as similar questions were answered about other toxic industrial chemicals—asbestos, PCBs, chromium six.

Until then, water utilities are doing what they must.

Daniel Santos, head of the water utility in Barnstable, Mass., told Bloomberg Environment that his town spent about $5 million over the past two years to deal with contaminated water and is poised to spend $6.5 million more in the near future. If Barnstable has to bear those costs on its own, he said, water bills in the town of less than 50,000 could soar for years to come.

“You have to provide water,” he said. “I predict we’ll be treating well water for eight to 10 years.”

While there are a wide number of variations within this class of chemicals, the two that have garnered the most concern among scientists and environmental regulators are known as PFOA and PFOS.

They’ve been linked to a number of diseases, including kidney and testicular cancers, and liver and thyroid problems.

But what sets PFOA and PFOS apart from other toxic chemicals is their persistence in the environment—and in the human body. The compounds take much longer to degrade than others do, so exposure over many years can have cumulative effects.

The chemicals were first developed by 3M in the late 1940s for use in stain-proof and nonstick products, but they also proved highly effective at putting out jet fuel fires on airfields.

That is how the Air Force, Navy, and other military branches used the chemicals on bases for decades: spraying foam containing PFOA, PFOS, and other fluorinated compounds on tarmacs across the country. Because the compounds didn’t break down, they eventually seeped into aquifers.

As a result, most of the communities now dealing with water contamination are ones that rely on well water and are located near military installations or airports, according to EPA and Government Accountability Office data analyzed by Bloomberg Environment.

A Bloomberg Environment analysis of EPA water contaminant data found that 65 water utilities across 24 states and territories had at least one sample that came back above the agency’s safety threshold for these chemicals. Collectively, these utilities serve more than six million people across the country. 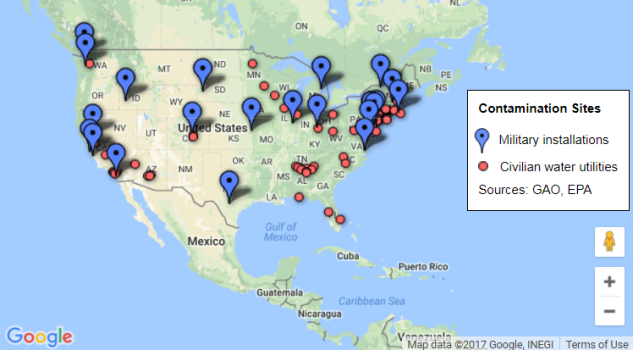 (Click this link to look at an interactive map that shows the civilian and military water utilities that were contaminated with PFOA or PFOS.)

The Environmental Protection Agency recognized almost a decade ago the potential harms that these chemicals could cause if they seeped into drinking water. In 2009, it set interim safety thresholds for both PFOA and PFOS and advised utilities to take action if their water tested above those health advisory levels.

As more became known about the health effects of these compounds, the EPA decided to revise its threshold downward. Last year, it set a single threshold for combined amounts of the two chemicals in water that was slightly more than one-tenth as high as the 2009 benchmark.

Utilities were shocked by how low this new threshold was and how little notice the EPA had provided them, according to Roy Heald, general manager of the water utility in the town of Security, Colo.

“It was terrible. It created panic within our community,” Heald told Bloomberg Environment. “You have more notice of a hurricane coming through than this.”

The EPA’s threshold for PFOA and PFOS is not legally binding, so utilities with concentrations above it aren’t legally required to remove the chemicals from their water supplies. But they are required to notify their customers of a test result above the threshold.

Given that, and the ensuing public outcry as news of contamination spread quickly, inaction was not an option for Security, Heald said.

Had the town not sought an alternative water source, “I would be working at Home Depot by now and all of our board would be recalled,” he said. “No one chose to sit back and take no action. It’s our customers that enforced it, it’s not the EPA.”

Other utility officials echoed similar sentiments: If the public believes there’s a potential carcinogen in their water, utilities have to act, regardless of what’s legally required of them. Utilities listed fluorinated chemicals as one of their top three regulatory concerns in a 2016 American Water Works Association survey of more than 1,700 people working in the industry.

A suburb of Colorado Springs, Security is a town of less than 30,000 just south of Peterson Air Force Base. Heald said the base is the likely source of Security’s contamination, among the worst of nearly any civilian water utility in the country, according to EPA data.

Before the EPA’s threshold was lowered, Heald said, only a few of the town’s 24 wells were affected. After the lowering, Security decided it couldn’t use water from any of its wells and, with an annual water budget of only $4 million a year, struggled to find a solution. Security ultimately had to purchase water from Colorado Springs at an exorbitant cost, Heald said.

Last year, the town spent roughly $2.5 million on securing alternate sources of water and has already spent nearly $5 million this year, according to Heald. That doesn’t include money the town spent over the years on groundwater rights for its 24 wells—a sunk expense, Heald said, since those wells may never come back online.

Issaquah, Wash., a suburb of Seattle, has already paid roughly $1 million to install filters on its wells and will likely be facing around $200,000 annually to maintain them, according to Emily Moon, a deputy city administrator. Issaquah’s water bills are certain to be affected, Moon told Bloomberg Environment.

The financial impacts of contamination vary. The main water utility in Pensacola, Fla., was able to compensate for its handful of contaminated wells by pumping more out of its roughly two dozen wells that remain free of the chemicals, according to Tim Haag, head of government affairs at the Emerald Coast Utilities Authority.

Public water utilities aren’t the only ones affected by these chemicals. Some private wells, which aren’t regulated by the EPA, also are testing positive.

The pollution control agency in Minnesota, where PFOA and PFOS were manufactured by 3M, has been installing hundreds of carbon filters on private wells at a cost of roughly $1,000 each, according to Gary Krueger, a supervisor in the agency’s cleanup division. The number of wells that need filtering in the state is rapidly increasing, Krueger told Bloomberg Environment.

Minnesota’s agreement with 3M is somewhat unique. Like DowDuPont, BASF, and other chemical companies, 3M has long since phased out its production of PFOA and PFOS. But the company has agreed to help cover the costs of decontamination near the facilities where it produced the chemical in Minnesota, Alabama, and Illinois.

Other towns are still looking for help in defraying the costs of the contamination so those costs don’t fall squarely on their own ratepayers.

The town of Security is in talks with the Air Force to try to access some of the funds it has allocated, Heald said, although those talks are slow going. Issaquah is considering a lawsuit against chemical manufacturers, Jeff Kray, an attorney in the Seattle offices of Marten Law who represents the city, told Bloomberg Environment.

If it does take legal action, Issaquah would join several other utilities that have already filed against manufacturers. Financial disclosures from DowDuPont, Chemours, and 3M list numerous lawsuits, both resolved and ongoing. The suits were filed by utilities in West Virginia, New Jersey, Minnesota, Massachusetts, North Carolina, and Alabama.

Dina Pokedoff, a spokeswoman with one of the manufacturers of the chemicals, the French company Saint-Gobain Performance Plastics, told Bloomberg Environment that her company is working with municipalities in New York, Vermont, and New Hampshire. However, she didn’t respond to questions about how much money Saint-Gobain has paid these municipalities to decontaminate their water.

Bloomberg Environment also reached out to other chemical manufacturers—3M, DowDuPont, and Chemours—to ask them how many contaminated utilities have asked them for compensation and how much they’ve paid out to these utilities. These companies either didn’t respond or didn’t comment.

It’s an issue that won’t be going away any time soon. Tim Haag, the utility official in Pensacola, said affected communities will be grappling with this contamination for years to come.

“We have to assume that this contaminant will always be in the well,” he said.

—With assistance from Pat Rizzuto and Sylvia Carignan

This is the first part of a Bloomberg Environment series looking at the impact of fluorinated chemical contamination on communities and businesses.

To contact the reporter on this story: David Schultz in Washington at dschultz@bna.com