surged the most in more than five months Thursday after the Ohio utility reached an agreement with federal prosecutors over a corruption case involving a $1 billion state bailout for nuclear power plants.

Under a deferred-prosecution agreement announced Thursday, FirstEnergy admitted that it conspired with public officials and others to pay millions of dollars in bribes. The company agreed to pay $230 million, the largest criminal penalty ever imposed by the U.S. Attorney’s Office for the Southern District of Ohio.

Investors, however, feared the penalties would be even worse, said , an analyst at FiscalNote Markets. 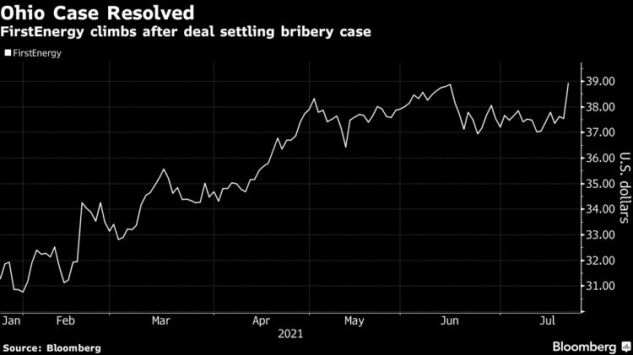 Under the three-year deferred prosecution agreement, authorities have filed a single charge of conspiracy to commit honest services wire fraud against the company. The charge will be dismissed if FirstEnergy abides by all terms of the agreement.

“FirstEnergy’s Board of Directors moved swiftly and decisively to investigate this matter and, along with the management team, has cooperated and will continue to fully cooperate with the U.S. Attorney’s Office,” Donald T. Misheff, nonexecutive chairman of FirstEnergy’s board of directors, said in a .

“Moving beyond charges of bribery by paying a $230 million fine will allow FirstEnergy to turn its full attention to the company’s new all-regulated structure, we believe.

The case began in July 2020 after federal officials then-Ohio House Speaker Larry Householder and others in a racketeering conspiracy involving almost $61 million in bribes to secure a more than $1 billion bailout of two nuclear power plants owned by the subsidiary, now known as

FirstEnergy later its chief executive officer, Chuck Jones, and had its credit rating . A nonprofit organization that allegedly funneled money to Householder and others . FirstEnergy in April that it was in talks with the U.S. Attorney’s Office on the bribery case.

A spokesman for Jones said in a statement that the ex-CEO didn’t engage in any unlawful activity or violate company policies. “Mr. Jones is very disappointed that FirstEnergy would falsely implicate so many hard working and dedicated employees in wrongdoing,” the spokesman, Allan Ripp, said.

Ohio’s attorney general FirstEnergy and Energy Harbor in September, accusing them of “corrupt activity” in connection with the subsidies. FirstEnergy later gave up a annual subsidy as part of a deal to pause the lawsuit.

In November, FirstEnergy that former executives violated company policies, citing a payment of about $4 million to an entity associated with someone subsequently appointed to be a state regulator. Public Utilities Commission of Ohio Chairman resigned the disclosure.

To contact the reporters on this story:
in Los Angeles at beckhouse@bloomberg.net;
in New York at wwade4@bloomberg.net