The use of ethylene oxide sparked a 2018 protest in front of the Oak Brook, Ill., headquarters of Sterigenics.
Photographer: Mark Black/Chicago Tribune/TNS via Getty Images

The EPA watered down its request to find out more about how companies use ethylene oxide to sterilize medical equipment after the Food and Drug Administration claimed jurisdiction over the use of the cancer-causing chemical to ensure these devices are safe for patient use.

“The FDA believes this entire section is not relevant to EPA’s role of setting appropriate emission levels and monitoring emissions,” the FDA wrote in its comments on a recent EPA notice about ethylene oxide. “FDA requests the deletion of this entire discussion about FDA requirements and matters within FDA jurisdiction.”

In the draft version of its pre-rulemaking notice, the Environmental Protection Agency had asked whether it would be possible for medical sterilization facilities to use low volumes of ethylene oxide on equipment in order to minimize airborne emissions of the toxic chemical. But the FDA—which is responsible for ensuring the safety of medical devices—pushed back during interagency review of the notice, claiming that the EPA had no authority over how much sterilizer is used at medical device sterilization plants.

The FDA said the EPA’s authority is over chemical emissions released into the air from the commercial sterilizer companies.

The FDA’s comments on the notice “point out that setting emission standards should not be about medical device sterilization. It should be about protecting the environment and protecting people,” an FDA spokesperson said in an email on Friday.

The EPA is seeking to update its emission standards for commercial sterilizers since concluding in 2016 that ethylene oxide is at least 30 times more carcinogenic than previously understood. And an EPA spokesperson told Bloomberg Environment that the Clean Air Act requires the agency to consider all emissions sources within an industrial category when it is setting toxic air pollutant limits based on the maximum cuts that current technologies can achieve.

Still, the EPA acquiesced to the FDA’s protests, removing the entire section dealing with low ethylene oxide volumes from the final version of its advanced notice of proposed rulemaking, which was released to the public in December (RIN: 2060-AU37). In its place, the EPA posed a general question about the cost and feasibility of practices that would result in lowered emissions of the toxic chemical.

The FDA, for its part, is looking for alternatives to ethylene oxide to sterilize medical devices.

Current sterilization practice uses the principal of “overkill"—sterilizing a piece of medical equipment for longer than is required to kill the microbes—so it remains sterile for the duration of its usable life, said Marcus Schabacker, president and chief executive officer of the ECRI Institute, a nonprofit patient safety group. 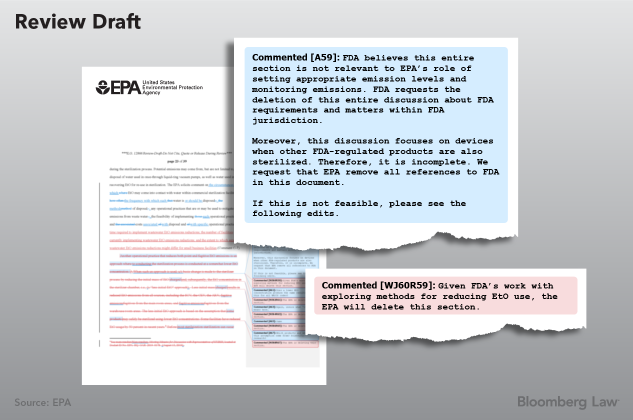 Limiting what information the EPA can gather on specific practices at medical sterilization companies may constrain its ability to impose more rigorous standards for medical device facilities than the ones the agency has had in place for ethylene oxide since at least 2001, when the chemical was not considered a carcinogen.

If the draft version of the notice “means that lowering concentrations of this toxic gas is off the table for EPA in this rulemaking, it certainly puts pressure on FDA to address it through its rulemaking authority,” Amit Narang, the regulatory policy advocate at nonprofit advocacy group Public Citizen, said in an email.

Ethylene oxide is a flammable, colorless gas with a faintly sweet odor that—in addition to its use to sterilize medical equipment—is a building block for other chemicals to make a range of products, including antifreeze, textiles, plastics, detergents, and adhesives.

The gas is found naturally in ambient air. But prolonged exposure to higher concentrations can hurt eyes and lungs, harm the brain and nervous system, and potentially cause lymphomas, leukemia, and breast cancer.

Communities around medical sterilization plants were among the first to raise alarms about airborne dangers of ethylene oxide.

Agencies often disagree on some elements of a rule or policy during the interagency review process overseen by the White House Office of Management and Budget. But the public rarely sees these disagreements, most of which take place behind closed doors, according to Narang. The exceptions are when agencies make changes to draft documents that are then posted on a public website, as happened in this case.

The EPA and the FDA aren’t strangers to approaching issues from opposing views: They have also disagreed on how to regulate traces of pharmaceuticals in treated water. In this instance, they are trying to work on parallel avenues to find the best ways to limit public exposure to ethylene oxide after the gas was detected in unsafe levels outside sterilizer plants across the country, including in Georgia, Michigan, and at a facility in Willowbrook, Ill., prompting outrage from local residents and the state’s senators.

The question that EPA posed in its Dec. 5 notice is part of the agency’s effort to decide how to revise its emission standards for sterilizer plants. As part of that process, the agency has asked companies to explain what technologies and practices they are using to capture stray emissions of the toxic chemical.

Once the EPA gets answers, it plans to release a formal proposal that could result in tighter regulations on the medical sterilizer industry. The FDA’s involvement, meanwhile, focuses on looking for alternatives to ethylene oxide, which is used to sterilize half of all medical devices in the country.

“We are in the process of determining whether EtO [ethylene oxide] is the only sterilization method that can be used for certain device types,” an FDA spokesperson said in an email. “We do know that at least some currently used methods are not appropriate alternatives for some device types because they degrade materials used in those devices.”

The FDA said any emissions standards from the EPA wouldn’t affect the FDA’s enforcement of standards for sterilization, which are focused on making sure devices are safe and effective for use.

Pending regulations from the federal government, as well as local pressure and regulations, have already prompted closures of some medical sterilization plants.

Illinois-based Sterigenics U.S. LLC was forced to close the Willowbrook facility last February amid outrage over its emissions. And Viant Medical, which also uses ethylene oxide as a sterilizer, will shut its doors later this year in Michigan after it was cited for disclosing a leak of ethylene oxide in 2017.

A Sterigenics facility in suburban Atlanta remains shuttered while the company updates its building and fire codes to meet county standards. And Becton Dickinson & Co. signed a consent order in October with Georgia’s regulators to temporarily shut down the company’s commercial sterilization facility and warehouses about 35 miles east of Atlanta.

The FDA said the option to use low volumes of the toxic chemical, as well as any other sterilization method, would have to be tested thoroughly before being adopted.

The FDA sought feedback from the medical industry in July to help find alternatives regarding ethylene oxide.

The healthcare industry is concerned that limiting uses of the chemical—or a potential ban, as some communities would like—could cause shortages of sterilized medical equipment in hospitals.

“If there’s an ubiquitous ban on ethylene oxide today, we’re going to have a health crisis on our hands, because in very short time and order, sterile products won’t be available and we don’t have an alternative to replace that today,” Schabacker said. “I don’t see the FDA and EPA coming together on this, but I’m sure they’ve talked to one another.”