Companies that use two grease removers should act now to reduce the liability, worker, and consumer risks the chemicals are raising, because they could be held accountable while EPA takes up to four years to decide how it will regulate them, corporate defense attorneys say.

The Environmental Protection Agency determined in recent months that factory, oil and gas workers, auto repair staff, and consumers working with the two solvents—methylene chloride and 1-bromopropane—face too high a risk of health problems ranging from headaches to reduced fertility, cancer, and sudden death.

Made in a “final risk evaluation,” those conclusions mean the EPA must prepare regulations that could require warning labels, decrease allowable concentrations of the chemicals in products, restrict the chemicals uses, or ban them.

Methylene chloride and 1-bromopropane are the first two chemicals the EPA examined pursuant to 2016 amendments made to the Toxic Substances Control Act. The law compelled the agency to evaluate commercial chemicals, find out if they pose an “unreasonable” chance of injuring people or the environment, and regulate them when they do. 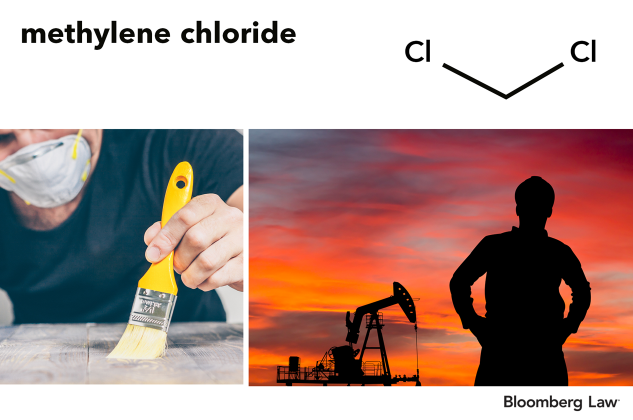 “Companies don’t want to wait for the regulations,” said Cynthia AM Stroman, a partner at King and Spalding LLP who specializes in environmental, health, and safety issues. Both chemicals have long been known to be hazardous, so toxic tort cases already are in the courts, she said.

“The findings in the final risk evaluation can provide litigants with a new tool to use in such litigation,” she said. Attorneys representing people claiming they’ve been injured by the chemicals are “absolutely” likely to use information in the EPA’s risk evaluations to buttress their clients’ claims, Stroman said.

But companies that dive into the hundreds of pages that make up the EPA’s analyses can find information that help them show the particular way they use either chemical is safe, she said.

Knowing the details behind the EPA’s conclusions and comparing that to a company’s own operations can help businesses manage liability risks, increase their confidence that they’re protecting workers and consumers, and help make EPA’s regulations more effective, Stroman and Lawrence E. Culleen, a partner specializing in pesticide and chemical regulations at Arnold & Porter Kaye Scholer LLP, in separate interviews.

The EPA will host its first public webinars to describe the coming regulatory process on Wednesday, Sept. 16 and on Sept. 30.

EPA has already concluded 47 out of 53 ways methylene chloride is used to clean industrial equipment, fix cars, and produce and use paint, adhesives, and oil drilling fluids can pose an unreasonable risk to some directly exposed workers.

The solvent also poses too great a risk to other workers’ health even if they don’t directly work with it, but inhale its fumes, the agency said, adding consumers using methylene chloride-containing products and bystanders also risk damage to their health.

The agency identified 16 out of 25 ways 1-bromopropane is used pose an unreasonable risk to directly or indirectly exposed workers, consumers, or bystanders near those consumers. The solvent also may hurt babies whose mothers are exposed while pregnant..

It didn’t examine whether the public faces undue risks when the solvents are released into outdoor air, water, or disposed of. The agency’s position is that air, water, and waste regulations already address those potential risks. 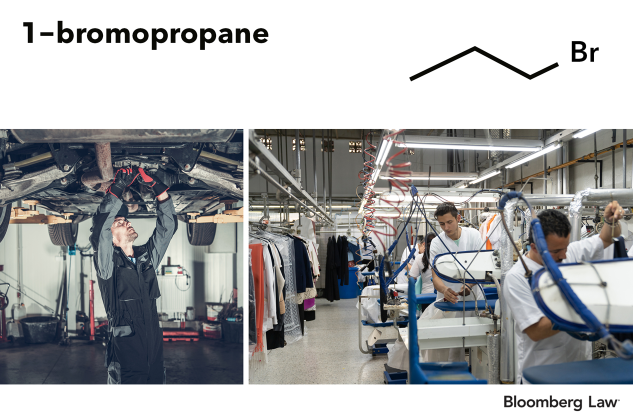 Albemarle Corp., Olin Corp., Occidental Chemical Corp. and Solvay are among the companies that have made or imported the chemicals, according to EPA records.

Manufacturing either methylene chloride or 1-bromopropane did not pose unreasonable risks, according to the EPA. Instead the risks resulted from ways industrial and commercial customers of both chemicals use them and the products those “downstream users” make. So, Bloomberg Law contacted the chemical manufacturers to find out whether they would provide any new information to their customers in light of EPA’s findings.

Solvay will follow the EPA development of risk management strategies, said company spokeswoman Dana Ponciroli. The company has reduced its use of this substance since 2016, which will be reflected in updated reports it will be filing with the agency, she said.

Over the past decade “Solvay has invested significantly in the development of new green solvents with low toxicity and improved environmental profiles that are sold as replacements for methylene chloride, Ponciroli said.

“Our studies demonstrate that the use of [personal protective equipment] and proper operational procedures minimize the risk of exposure to workers for this application,” he said. “Albemarle will continue to fully collaborate with regulatory authorities in the U.S. and internationally,” Miller said.

Neither Olin nor Occidental replied to requests for comment.

‘Not Every Business’ Targeted

The agency’s “unreasonable risk” determinations don’t mean the EPA is saying every business is actually exposing people to a high level of hazard or risk, Stroman said.

The EPA assumes people may be more highly exposed to a chemical than they are to err on the side of protecting them, and a company’s own production and uses of either chemical may not match the EPA’s risky scenarios, she said.

Culleen encouraged companies to pull together teams of attorneys, industrial hygienists, and other specialists to critically and carefully review the EPA evaluations.

Businesses should consider whether their product’s packaging, labels, and warning statements are adequate; whether the concentrations of the chemicals they use raised concerns in EPA’s analyses; and whether actions they could take would mitigate potential risks, Culleen said.

Manufacturers should talk with their employees even though “it’s always an awkward conversation with workers who have longevity in their careers,” said Abby Ferri, a workplace safety professional at Merjent Inc., a Minneapolis-based environmental consulting firm.

“In Minnesota, we have annual HazCom and right-to-know training,” she said. “Other states don’t have as strict requirements.”

“There’s often a lot of mistrust of the employer,” especially around the use of personal protective equipment, said Michael Wright, director of health, safety, and environment at the United Steel Workers union.

“A company will spend 20 years telling people something is perfectly safe, and then says everyone has got to use a respirator,” Wright said.

The EPA’s risk evaluations presume that most factories provide their workers respirators, and details protection levels respirators should have.

Yet, the its assumption that respirators are commonly used, fit correctly, and work as intended, frustrated both its science advisers as they critiqued the agency’s draft risk evaluations and former Occupational Safety and Health Administration officials.

“Respirators are not a first line of defense. They don’t work as well as advertised,” said Adam Finkel, who directed OSHA’s Health Standards Programs from 1995-2000.

Both agencies used the same toxicity data, yet the EPA concluded methylene chloride would not pose as great a cancer risk as OSHA estimated when it set its 1997 workplace limits for the same chemical,” said Finkel, who now teaches environmental health sciences at the University of Michigan.

“Putting aside its carcinogenic effects, several workers die every year from using methylene chloride in inadequately ventilated rooms,” said David Michaels, who served as assistant secretary of labor for occupational safety and health during the Obama administration and now teaches at the George Washington University.

The EPA could prevent some future deaths if it uses an authority the Toxic Substances Control Act, said Jonathan Kalmuss-Katz, an Earthjustice attorney. He worked with labor groups commenting on the EPA’s draft methylene chloride, 1-bromopropane, and other chemical risk evaluations.

The EPA must propose a rule controlling the unreasonable risks of methylene chloride and 1-bromopropane within one year.

The law allows the agency to impose the proposed controls immediately if they’re for an “imminently hazardous chemical” and its ongoing uses would result in serious or widespread injury, Kalmuss-Katz said.

Methylene chloride is clearly an imminent hazard, he said.

Waiting years to control chemicals that can kill in a matter of minutes is an eternity, Kalmuss-Katz said.

(Updated with information about options and panels in 12th paragraph.)

To contact the editors responsible for this story: at rbaker@bloombergindustry.com; at csaenz@bloombergtax.com; at aharris@bloomberglaw.com