Despite the inclination to associate a Democratic administration with stricter enforcement, data from the Environmental Protection Agency do not support the assumption, Jones Walker attorneys say. A downward trend in civil enforcement began as early as 2008, and continued through both the Obama and Trump administrations, they write.

With Election Day 2020 passed and an administration change coming, people may be wondering how this may influence federal environmental enforcement activity.

Headlines suggest that a Biden administration will result in an enforcement crackdown. But despite the inclination to associate a Democratic administration with stricter enforcement, data made available by the Environmental Protection Agency (EPA) do not support this assumption.

In fact, the data show that a downward trend in civil enforcement began as early as 2008 and continued through both the Obama and Trump administrations.

One likely explanation for the decline in civil enforcement activity, at least in part, is an increase in self-audit and self-disclosure of violations. The EPA’s self-disclosure program is intended to foster corporate compliance and incentivize disclosure and correction of violations by eliminating or reducing civil penalties.

The EPA announced a “renewed emphasis” on the program in May 2018, and the EPA’s efforts to promote the program appear to have been successful. Fiscal year 2019 alone saw a 20% increase in voluntary disclosure compared with FY 2018. 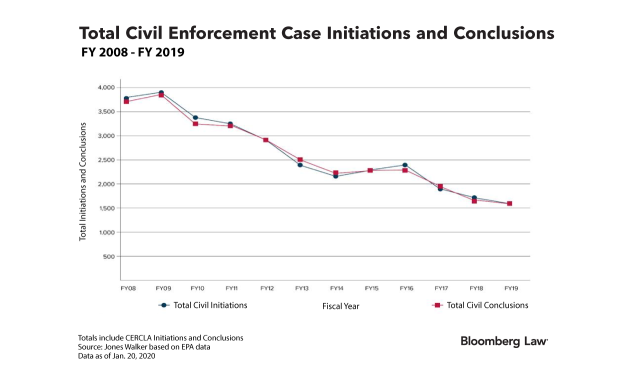 EPA Budget Has Not Declined

Trump’s FY 2021 budget did propose cuts to EPA funding, but similar budget cuts have been proposed throughout the Trump administration and have yet to make it into the final EPA budget.

Other measures of enforcement activity that contradict the myth of reduced enforcement under Trump are civil penalties and criminal enforcement. In FY 2019, the EPA assessed more than $360 million in federal administrative and civil judicial penalties, an amount higher than the annual penalty values assessed in all but three of the past 10 years.

Often, civil penalties correlate with the settlement of major enforcement actions—and such settlements do not depend on the party affiliation of the executive branch.

In fact, in a news release issued on Oct. 20, 2020, the EPA boasts:
EPA has assessed more in civil penalties, criminal fines, and restitution since President Trump was inaugurated than the agency collected in the first four years of the prior administration. We are on track to collect more than twice as much during our first term – all without counting the Volkswagen emissions.
(ICYMI: Trump EPA’s Focus on Enforcement and Compliance Is Paying Off)

In other words, the notion that enforcement under the Trump administration has been de-prioritized is not supported by the data. It is possible, however, that we may see some reduction in enforcement activity in FY 2020 as a result of the EPA’s temporary enforcement discretion policy during the Covid-19 pandemic; the policy went into effect on March 13, 2020, and was terminated on Aug. 31, 2020.

Although the policies embraced by the White House inevitably influence agency priorities in some way, it is important not to overstate the effect policymakers and political appointees have on agency actions. Environmental enforcement under Trump has not been a free-for-all for industry.

Similarly, a serious enforcement crackdown under Biden is unlikely. Some policies enacted under Trump may change under Biden—including, for example, the Department of Justice’s recent abolition of supplemental environmental projects in civil settlements with private defendants—and Biden’s focus on environmental justice could reinforce the EPA’s ongoing efforts to address industry activity in underprivileged areas.

It is more likely, however, that we will see a continuation of established enforcement trends. The EPA will continue to enforce the ever-increasing environmental regulations, so companies should continue to make compliance a priority.

Elise Henry is an associate in Jones Walker LLP’s Litigation Practice group. She focuses on environmental regulatory compliance and litigation.