’s embattled plan to build a tunnel under the Straits of Mackinac for its Line 5 oil pipeline will need a more thorough review from the U.S. Army Corps of Engineers, the latest setback for the project opposed by Michigan Governor .

The Army Corps said Wednesday that the project will require an environmental impact statement, which is lengthier than a simple environmental assessment. The EIS is appropriate because it could “significantly” affect the quality of the “human environment,” Jaime Pinkham, acting assistant secretary for the Army for Civil Works, said on the agency’s website.

The requirement is a victory for environmentalists and indigenous groups that now will gain more time to oppose Line 5. The Canadian pipeline giant is facing mounting opposition and hurdles for its two key projects to upgrade conduits that haul crude from the oil sands to U.S. refineries. They are crucial for producers in Alberta that have struggled for years with a shortage of export pipelines, and have seen projects such as ’s Keystone XL get scrapped. 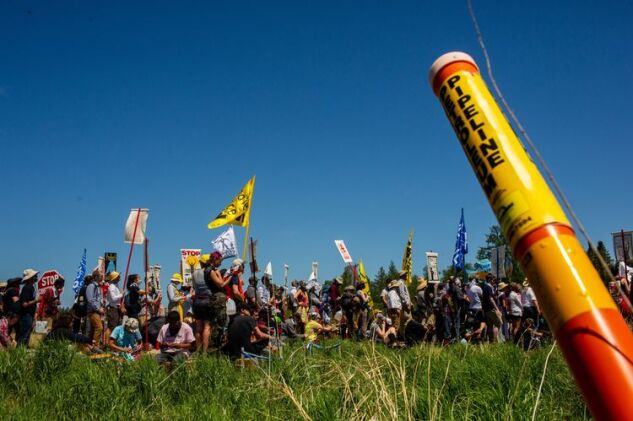 The decision “will lead to a delay in the start of construction on this important project. Enbridge will continue to work with the USACE on its review of our application and towards a successful conclusion to this process which began when we filed our permit application in April 2020,” Calgary-based Enbridge said in a statement.

Earlier this month, more than 200 protesters were arrested in Minnesota after they clashed with law enforcement at a pump station for Enbridge’s Line 3, which the company is expanding.

For Line 5, Enbridge is seeking to construct a tunnel under the lake bed as it fights off an order from Whitmer to shut down the pipeline entirely. The governor says that the line is a threat to the Great Lakes, but Enbridge and the government of Canada argue that Line 5 is an essential conduit of light crude for refineries in the U.S. Midwest, as well Ontario and Quebec.

Last year, Whitmer revoked an easement for the line and ordered it shut by May 12, which Enbridge defied, arguing that the governor didn’t have the authority to shut the line. The dispute is currently before a federal judge and in court-ordered mediation.

The fight has soured relations between the U.S. and Canada months after President Joe Biden, a Whitmer ally, angered Canadians by revoking a permit to the build cross-border Keystone XL pipeline. While the Keystone decision was disappointing, the continued operation of Line 5 is “nonnegotiable,” Canada’s Natural Resources Minister has said.

“Governor Whitmer stood with the people as she raised the alarm on the risks associated with the Line 5 pipeline,” Jane Kleeb, chair of the Nebraska Democratic Party and founder of the Bold Alliance, said in an email. “It is our hope Pres. Biden applies the same standard to reviewing and ending the KXL pipeline to other pipelines that are all risk and no reward.”

The Line 5 tunnel project received a permit in January from the Michigan Department of Environment Great Lakes and Energy. Other state and federal permits are still under regulatory review.

In both cases, Enbridge has argued that the pipeline upgrades will make the lines environmentally safer. Line 3 was built in the 1960s, and Line 5 in the 1950s.

To contact the reporter on this story:
in Calgary at rtuttle@bloomberg.net

To contact the editors responsible for this story:
at jkelemen2@bloomberg.net