An emergency measure to eliminate a testing requirement that all but requires the use of toxic “forever chemicals” in firefighters’ protective garments was rejected by an association that sets fire safety standards.

The vote by the National Fire Protection Association’s Standards Council means hundreds of thousands of firefighters across the country must continue to wear safety equipment that has been shown to contain large amounts of potentially cancer-causing per- and polyfluoroalkyl substances, or PFAS.

At issue is a strenuous safety test established in 2006 that requires the inner liner, or moisture barrier, of firefighter gear to maintain water resistance after 40 straight hours of exposure to ultraviolet light. The only products able to meet the test’s standards are made with PFAS.

The NFPA said in its decision released late Friday evening that there wasn’t a “clear and substantial basis” to overturn an earlier vote by the organization’s Technical Committee that rejected the technical merit and emergency nature of the proposal.

The nation’s largest union of firefighters, the International Association of Fire Fighters, submitted the request to remove the light exposure standard. Earlier this summer, it encouraged its membership of 324,000 firefighters to advocate for eliminating the test, saying it “lacks scientific merit” and is “illogical.”

Moisture barriers are designed to improve garment breathability and provide firefighters an additional barrier against fluids.

Critics say moisture barriers rarely, if ever, are exposed to light, making the test unnecessary. Advocates say the test is based on evidence of previous moisture barrier failures and that any change requires more study.

Caught in the middle are firefighters who are growing increasingly concerned that large outbreaks of cancer may be tied to the high levels of PFAS in their gear.

A decade ago, most firefighters had no clue what PFAS was or just how much of it was in their gear.

PFAS is a group of human-made chemicals that first hit the market as coatings for Teflon pans in the 1950s, and are now found in products like microwave popcorn bags, pizza boxes, carpets, and cosmetics.

PFAS include thousands of compounds, including PFOA, PFOS, and GenX. They are known for their stability and water and heat resistance, thus making them ideal for firefighter gear.

But they also may cause increased cholesterol levels, lower infant birth weights, and increases in the risk of kidney or testicular cancer, according to the Centers for Disease Control and Prevention.

Last year, a study by nuclear physicist Graham Peaslee at the University of Notre Dame offered a definitive look at how much PFAS is in firefighters’ protective equipment, known as turnout gear. It found “significant quantities of fluorochemicals” in new and used garments.

But perhaps most alarming for firefighters was the finding that the material closest to a firefighter’s skin appeared to gather more PFAS concentrations with age. That meant that PFAS was likely shedding from the moisture barrier and outer liner through use.

Existing studies are undecided on what risk there is to frequent PFAS exposure to the skin. But the concern is that PFAS may be absorbed into the skin through sweat.

An initial study last year found that PFOA, one of the oldest types of PFAS, could be absorbed through the skin and result in a suppressed immune system.

Manufacturers of firefighter gear have repeatedly said their gear is safe.

W.L. Gore & Associates, which manufactures moisture barriers, said in a July comment to the NFPA that it’s “confident in the safety and performance” of its products. It said the proposal before the NFPA mischaracterized the PFAS material Gore uses in its products: a form of polytetrafluoroethylene (PTFE).

“Based on our review of available science, Gore concludes its firefighting products are not the cause of cancers impacting firefighters,” the company wrote. 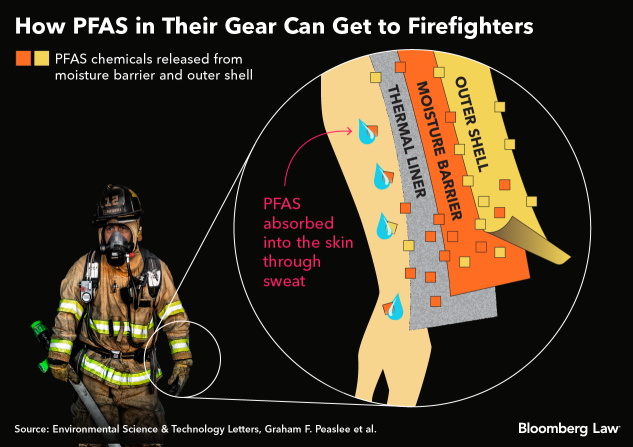 The vote may be lost, but another opportunity for a rules change will present itself later this year.

The NFPA is drafting a new edition of its safety regulations, which will combine the existing safety standard governing firefighters’ protective equipment into a new, consolidated standard. Comments on the draft of the new standard are due in November.

Several of the NFPA Technical Committee members who voted against removing the light test last month signaled that they would be open to removing the UV light test in the future with more research about unexpected safety implications.

For Diane Cotter, an advocate for PFAS-free fire gear, the news and its release on the eve of the 20-year anniversary of 9/11 was a massive disappointment. She said that the presence of manufacturers in the NFPA will make pushing through any changes difficult.

“It hasn’t been easy,” said Cotter, who began advocating for the elimination of PFAS from the fire service after her husband Paul’s cancer diagnosis in 2014. “In the six years, as we’ve traveled through this mess, we have seen how tightly woven all of the manufacturers are together.”

Paul chimed in that there’s currently no incentive to remove the UV light test.