The Lake Mead reservoir formed by the Hoover Dam on the Nevada-Arizona border, shown here on July 20, 2021, provides water to the Southwest. But it has remained below full capacity for decades due to drought, forcing the Bureau of Reclamation to cut Arizona's allotment of its Colorado River water.
Photographer: Patrick T. Fallon/AFP via Getty Images

As the historic drought hitting much of the country decreases the flow of rivers and streams, more municipalities are drawing water from underground aquifers and wells. And emerging data shows PFAS contamination could be prevalent in some of those groundwater sources.

“This is not an insurmountable problem,” Sen. Mark Kelly (D-Ariz.) told Bloomberg Law. “But when we use a groundwater supply, we’ve got to make sure it’s safe.”

As of December 2021, the PFAS Project Lab at Northeastern University had documented per- and polyfluoroalkyl substances in soil or water at 1,781 sites, with groundwater at 1,385 of those sites contaminated with the man-made chemicals.

But little comprehensive data exists on how many of the country’s public water systems—and the EPA says there are more than 148,000 of them—are even tracking PFAS contamination.

That will soon change for the biggest utilities. The Environmental Protection Agency has finalized a rule requiring drinking water systems serving more than 3,300 people to monitor unregulated contaminants, including some PFAS chemicals, starting next year.

Conditions are especially acute in Kelly’s home state of Arizona, which has experienced drought for more than two decades. Last year, a Tucson water treatment plant was forced to shut down after high levels of PFAS were found in its water supply.

Arizona gets about 36% of its water from the Colorado River Basin, which was rationed by the U.S. Bureau of Reclamation in 2021 for the first time due to extreme drought conditions throughout the Southwest. The state needs to cut 18% of the water it takes from the river, forcing it to rely more on groundwater—already the source of 40% of the state’s water supply.

“Because the aquifer is our backup water supply, we need to make sure people can drink this water,” and that it’s safe for farmers and ranchers to use, Kelly said.

The Senate Environment and Public Works Committee, on which he sits, will look at a range of federal policy options to help protect drinking water, Kelly said.

Kelly discussed the issue with EPA Assistant Administrator for Water Radhika Fox at a committee hearing on Oct. 20, 2021.

High levels of PFAS in Tucson’s water supply forced its utility to shut down some wells, making it a “canary in this coal mine,” said Tim Thomure, interim assistant city manager for Tucson and former director of Tucson Water, the city’s water utility.

Last year, PFAS levels in groundwater coming from Davis-Monthan Air Force and National Guard bases skyrocketed from around 10 parts per trillion to more than 1,000 parts per trillion within six months, he said. That PFAS never got into people’s tap water, Thomure said. But three wells that the city keeps permitted and operational in case the water is needed had to be shut down.

After a state investigation found some concentrations above 70,000 parts per trillion, the state and Tucson Water built a $3.3 million pilot plant, which opened this month, to remove the PFAS, said Misael Cabrera, director of the Arizona Department of Environmental Quality.

But costs will climb. “We’ve had around $50-$60 million direct impacts come from wells we had to take off line, plus millions of dollars monitoring for PFAS,” Thomure said. He estimates it could cost up to $200 million more to treat the PFAS plume headed towards Tucson’s water supply.

Arizona has found 39 public drinking water systems using groundwater to be contaminated with PFAS, Cabrera said. Twelve of the systems had levels exceeding the EPA’s health advisory level of 70 parts per trillion of perfluorooctanoic acid (PFOA) or perfluorooctanesulfonic acid (PFOS), or a combination of both, he said.

PFOA and PFOS are two of the most common types of PFAS chemicals, of which there are thousands. PFAS have been linked to cancer, immune suppression, and liver and kidney damage.

Removing PFAS from drinking water is difficult and costly. But it could become a function of more water utilities in the coming years as droughts hit parts of the country harder, become more prevalent in states that don’t typically suffer from them, and the EPA moves to regulate some of the chemicals.

Since the 1940s, PFAS have been used in a wide range of products including nonstick cookware, water-resistant clothing, semiconductors, fuel cells, and specialized firefighting foam. Sites including airports, military bases, landfills, and factories have released the chemicals into the environment.

Some of the so-called forever chemicals don’t break down in the environment, and over time can filter into underground aquifers, polluting groundwater. PFAS can also contaminate surface water, and its concentrations vary depending on local circumstances.

In parts of California, utilities are considering drawing water from wells known to be contaminated with PFAS in order to meet demand, because of shortages from other wells and surface water, said Dan Newton, assistant deputy director of the California State Water Resources Control Board.

“The drought seems to be another stressor that is accelerating the systems’ response, or the need to address their PFAS issues,” Newton said.

SCV Water usually relies on a mix of groundwater and surface water, which comes from the State Water Project. But the drought was so severe last year that California officials didn’t allocate any state water to SCV Water, forcing the utility to rely solely on groundwater, said director of operations and maintenance Mike Alvord.

After PFOA was discovered in many of its wells in 2019, SCV Water spent $800,000 on six ion-exchange units to remove the PFOA from three of the utility’s highest-producing water wells. But that doesn’t cover its long-term needs, Alvord said. The overall project cost was $7.75 million.

SCV Water will need up to 10 years to purchase ion-exchange units to treat all of its groundwater for PFAS. The less state water the utility is able to get, the more urgently it will need to remove PFOA from its groundwater, he said.

If it’s too dry to avoid delivering PFOA-contaminated groundwater from water wells it can’t yet treat, SCV Water will have to implement water conservation measures, he said.

“We will not have any problems meeting water supply demands in 2022,” Alvord said. But “2023 is really going to be dictated based on how much snowpack we get.”

More than half the country is in some level of drought, a condition worsened by climate change. New England’s severe drought in early 2021 affected the drinking water supply in Portsmouth, N.H., which relies on both a municipal reservoir and groundwater wells.

As the drought threatened the city’s reservoir capacity, Portsmouth officials reactivated a well found in 2014 to be contaminated with PFAS from Air Force firefighting operations, according to the city’s website. 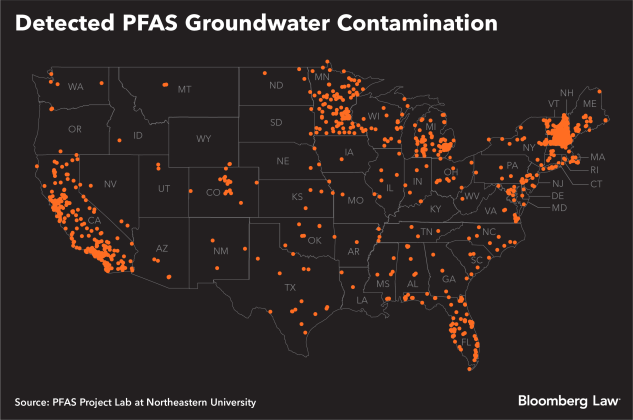 The city had spent seven years building a system to remove the contamination from the well, an ion-absorption and activated-carbon system that treats the drinking water supply for PFAS, and adds up to $400,000 to Portsmouth’s annual water treatment costs, said Brian Goetz, deputy director of public works.

“We were the first in New Hampshire–one of the earliest high profile sites to be dealing with this,” he said.

More information will be available in coming years now that the EPA has finalized a rule requiring drinking water systems serving more than 3,300 people to monitor—but not remove—unregulated contaminants including 29 PFAS between 2023 and 2025.

In addition, the National Defense Authorization Act that Congress passed in December requires the Pentagon to monitor more of its sites for PFAS by the end of 2023.

And the infrastructure bill Congress passed in November includes billions of dollars to help states and utilities address drought and emerging contaminants including PFAS. It included $10 billion for EPA to help communities deal with contaminants including PFAS, and $8.3 billion for the Department of Interior to invest in projects offering water and drought resilience.

“Any time you’re using the word billion with a ‘b’ you’re in the right neighborhood,” said Thomure, the assistant city manager in Tucson. “It needs to be mobilized quickly to projects in defined areas that can use that money to get to solutions as fast as possible.”

Groundwater protection and drought mitigation projects in Arizona, California, and Nevada are among those to be funded in the Interior Department’s initial infrastructure bill spending plan.

Some state water officials say they look forward to another anticipated action by the EPA: setting nationwide limits on the amount of PFOS and PFOA that are allowed to be in drinking water.

Arizona’s Department of Environmental Quality has been able to work with public water systems and military bases to reduce PFAS, Cabrera said. But “a federal standard would give us legal authority, not just moral authority.”

That regulatory authority could be a more efficient way for states and water utilities to be reimbursed for the costs of cleaning up the chemicals, said Henry Darwin, an environmental attorney with Gallagher and Kennedy’s Phoenix office.

Without a federal standard, states and utilities are suing companies, the Defense Department, and others they allege contaminated the water, he said.

“Relying on tort liability to protect your water is not the most effective way” to recoup funds, said Darwin, who spent more than 25 years in state and federal executive government positions, including serving as the EPA’s chief operating officer under President Donald Trump.

Ultimately, anything that increases testing for PFAS in drinking water is a positive, said Alissa Cordner, co-director of the PFAS Project Lab and an associate professor at Whitman College in Washington state.