The sacred and historic site is at the nexus of fossil fuels, environmental justice, and conservation issues likely to be raised at the Senate confirmation hearing for . The nomination has run into Republican objections over her stances on oil and gas drilling.

Tribes from Alaska to New Mexico have frequently objected to what they say is the Interior Department’s past failure to consult with tribal officials on proposed oil and gas development and other industrial activities on federal land, including around Chaco. That frustration has touched off dozens of lawsuits—and legal experts say more are likely if things don’t change.

The tribes and environmental groups are looking to Haaland and her efforts to protect the Chaco area in order to gain a greater voice in federal oil, gas, and mining decisions.

“The problems of federal oil and gas leasing and permitting in Chaco are a microcosm the problems of the program nationwide,” said Taylor McKinnon, a public lands campaigner for the Center for Biological Diversity.

If confirmed, Haaland, who is a member of New Mexico’s Laguna Pueblo with ancestral ties to Chaco, will oversee all federal oil and gas reserves. Her fierce opposition to fossil fuels leasing around Chaco and across the West is emerging as the biggest roadblock to her confirmation.

Haaland’s confirmation won’t be easy, but she’ll probably be confirmed, said Michael McKenna, a GOP energy strategist and former energy adviser to the White House during the Trump administration..

Daines can slow down Haaland’s nomination, but he can’t derail it without help from a Democrat, which he’s unlikely to get, McKenna said. However, once confirmed, Haaland’s tenure is likely to be rocky, McKenna said. 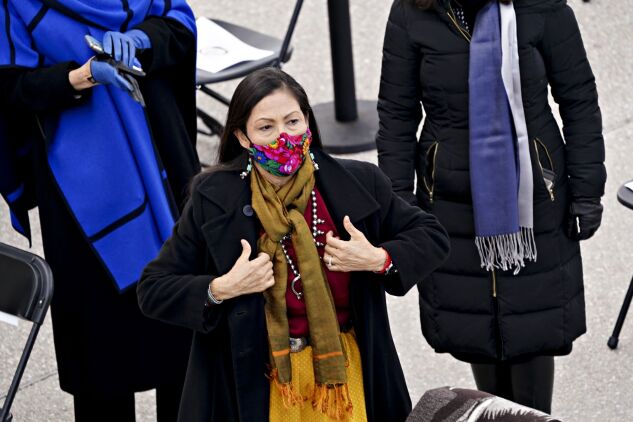 “President Biden’s generally fey attitude towards employment in the oil fields and in related sectors, as well as his discounting of the economic damage (including State revenues) done to New Mexico, North Dakota, Colorado, and Montana, does not bode well for her tenure,” McKenna said via email.

The oil and gas industry is pushing Haaland to keep that sector’s employment in mind, regardless of the cultural sites at risk.

If Haaland’s nomination is derailed in the Senate, it will signal to Indigenous people that the Senate isn’t interested in protecting Interior Department lands, including the Chaco Canyon region, that are important to the public and to tribes, said Mario Atencio, a legislative district assistant to the Navajo Nation Council.

Chaco Canyon, part of Chaco Culture National Historical Park, is a UNESCO World Heritage Site in northwest New Mexico. Tribes in the region consider Chaco one of their most important sacred sites—an ancient hub of trade for a region that stretched to Colorado and Arizona.

In Congress, Haaland has been an outspoken advocate for protecting Chaco and calling for the federal government to hear tribal voices on how it and other culturally important areas are affected by hydraulic fracturing.

“These sites and the objects they contain tell the history of my people and connect us to our past,” and Congress owes it to tribal communities to protect them, Haaland said in a 2019 House floor speech advocating for a bill that would have barred drilling across 333,000 acres around Chaco Culture National Historical Park.

The bill, which passed the House, gained little traction in the Republican-controlled Senate. Its House sponsor, , plans to reintroduce it this year in the Senate, where he now serves, his office said.

Tribal officials throughout the West are keenly aware of Haaland’s position on Chaco and what that might mean for her approach to protecting tribal sacred sites on federal land from industrial activity, said Jeanette Wolfley, a member of Idaho’s Shoshone-Bannock Tribes and a private lawyer near Albuquerque.

The greater Chaco region has been embroiled in a long fight between area tribes and environmental groups on one side, and Interior’s Bureau of Land Management on the other. The land bureau in 2014 began amending a federal land plan for the area around Chaco Canyon to allow for more shale oil and gas development, while simultaneously leasing the area for future drilling.

The New Mexico Oil and Gas Association says fracking is one of the only sources of revenue for the Four Corners area, and the industry doesn’t want to impact sacred sites. The oil, gas, and mining industries account for about 10% of all jobs in San Juan County, N.M., home to Chaco Canyon.

That land plan amendment is still in the process of getting finalized, but its future is unclear. For now, a legal challenge in the U.S. District Court in New Mexico to nearby leasing brought by local environmental groups was stayed Feb. 2 after the Biden administration took office.

Local tribes say the land bureau didn’t do enough to meet its obligation to consult with them about future leasing. Under the National Environmental Policy Act and the National Historic Preservation Act, federal agencies are required to consult with tribes when proposing new infrastructure projects, such as new drilling near Chaco.

Many tribal officials were upset because they said the agency’s outreach was insufficient for tribal voices to be heard, Atencio said.

“At the time, their form of consultation was to send a letter that said, ‘Dear tribal leader,’ and in most cases, the local leaders never got the letter because they were sent to the wrong addresses,” said Daniel Tso, a member of the Navajo Nation Council.

Tso’s concerns echo all the way to Alaska’s North Slope, where the land bureau during the Trump administration forged ahead with plans to lease the Arctic National Wildlife Refuge and opened other large swaths of the Arctic to drilling and mining access over tribal objections.

“Every time we found ourselves in communication with the administration, it always felt like they were checking a box,” said Charlene Stern, a member of the Native Village of Venetie tribal government in northeastern Alaska. She was referring to the land bureau’s consultation with the tribe about the Arctic refuge.

The Interior Department and Haaland’s office both declined to comment on questions about Chaco, tribal consultation, and Haaland’s possible strategy for accounting for tribal concerns.

Tribal concerns about consultation are reflected in a 2019 Government Accountability Office report that concluded the federal government has failed to consult with tribes nationwide.

Federal agencies, including the land bureau, often fail to consider tribal voices when making decisions on proposed infrastructure projects, consult with tribes too late in the process, and don’t respect tribal sovereignty, the report said.