As incoming Biden administration officials launch an ambitious environmental agenda across the executive branch, one Trump administration lawyer is anxious to see at least part of his legacy preserved.

Jeffrey Bossert Clark, who led the Justice Department’s environment division under President Donald Trump, knows many of his proudest achievements will be erased in the new administration—including a flurry of controversial memos he issued just before resigning. But he’s holding out hope his successors don’t completely unwind his work revamping National Environmental Policy Act regulations.

“Obviously I think all of it is worthy and should be retained,” he said of the rules he helped craft, and then successfully defended against two preliminary challenges. “My hope is that much of those reforms will survive because I do think that they’re good for the country.”

Clark discussed the new NEPA rules and other memorable parts of his tenure in an interview with Bloomberg Law in the Justice Department’s courtyard three days before his Jan. 14 resignation.

The former Kirkland & Ellis LLP lawyer took the helm of the department’s Environment and Natural Resources Division in 2018. He also spent the past several months filling in at the Civil Division. Along the way, he developed a reputation for pushing aggressive conservative legal principles and taking a hands-on approach that drew kudos from some colleagues but often frustrated career lawyers on his team.

Reflecting on his tenure, Clark readily defends the legal positions he took. He also disputes that he didn’t trust the division’s career staff.

The Trump administration’s environmental agenda was on a losing streak in court when Clark started as assistant attorney general in 2018, after a long Senate confirmation process.

Scott Pruitt, who led the Environmental Protection Agency, and Ryan Zinke, who led the Interior Department, were carrying out swift rollbacks that often cut procedural corners and prompted judicial rebukes. Defending those agencies was a key part of Clark’s job as head of ENRD. 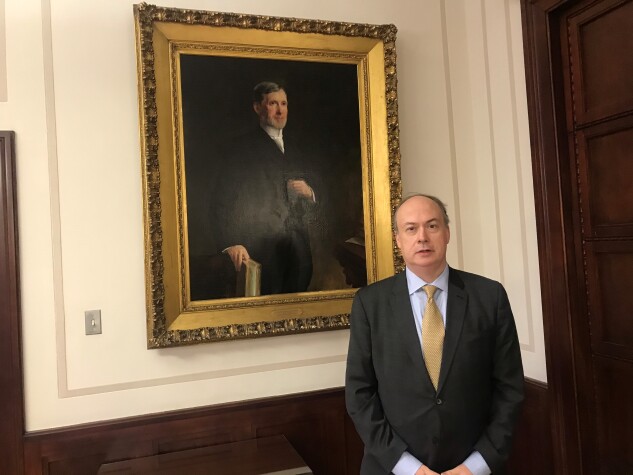 “It’s a challenging job,” Clark said of his first days in the role. “It’s a very controversial area, and so I certainly knew that I was going to face that.”

He added that he knew Pruitt, in particular, was “doing things in a highly aggressive way.”

“I’d like to think that if I had been in place earlier, I might have been able to provide some better counsel about that,” he said, “but no one knows that for sure because you’re not actually there.”

The agencies’ legal records improved slightly as they moved from freezing Obama-era rules to crafting their own—though the biggest cases remain undecided. Clark called the legal defeats “overcovered” and said he doesn’t dwell on them.

“I think he did a good job under the circumstances,” said Holland & Hart LLP attorney Tom Sansonetti, noting Clark’s slow Senate confirmation and the coronavirus pandemic. “He had some more trying circumstances than a lot of us.”

Sansonetti led ENRD during the George W. Bush administration, and Clark was one of his deputies.

Clark is proud of the legal battles ENRD won on behalf of the Trump administration, especially the ones he argued himself, including the preliminary NEPA challenges and a novel climate lawsuit.

He noted in his resignation letter that he’d argued more cases than any other assistant attorney general during the Trump administration. A Clean Air Act dispute in the U.S. Court of Appeals for the Eighth Circuit in December marked a personal milestone: Between government service and private practice, Clark has now argued in all 13 federal circuit courts.

“Jeff took a very hands-on approach to the role of AAG, and not just in the high-profile matters,” said Vinson & Elkins LLP attorney Corinne Snow, who served as counsel and chief of staff at ENRD from 2017 to 2020. “From reviewing briefs to drafting policies to taking on arguments, he was in the weeds in the division’s work.”

On the enforcement side, Clark played a key role in the Trump administration’s efforts to root out emissions test cheating throughout the auto industry. One of the last cases he worked on yielded a $180 million penalty against Toyota Motor Corp. announced last week.

But Clark’s hands-on style often created friction with the Justice Department’s rank and file. Current and former career attorneys described Clark as a divisive figure compared to past ENRD leaders from both Democratic and Republican administrations.

Some complained about Clark’s practice of arguing cases others had been handling, his refusal to attach his name to routine filings he hadn’t reviewed, and his tendency to second-guess career lawyers’ recommendations.

“I do have strongly held legal views and a strongly held legal philosophy, and I’m capable of getting into the guts of long statutes and reticulated regulations,” Clark said. “Sometimes there can be a sense of ‘trust our advice.’ And I’m more likely to want to kind of kick the tires, and take the car for a spin and ask a lot of questions, and then come at it that way.”

Jonathan Brightbill, a political appointee who served as Clark’s deputy at ENRD, praised Clark for having “one of the most amazing intellects of anyone I’ve ever worked with, and an encyclopedic knowledge of the environmental and natural resources statutes.”

Clark’s longtime critics outside the agency spurned both his leadership style and his role defending environmental rollbacks.

“He tried to use ENRD to undermine our environmental laws on behalf of the polluters he represents in private practice. He denigrated career attorneys who honored their duties to the American people and the rule of law, and I am sure they will welcome new leadership.”

Clark sometimes made decisions that rankled industry advocates, too. Most notably, he prohibited the use of popular settlement devices called supplemental environmental projects, or SEPs. Industry lawyers and environmentalists panned Clark’s ban and are looking to the Biden administration to reverse course.

Between the SEPs ban and related policies, “there was a clear focus on dismantling enforcement tools that could remedy the impacts of pollution where environmental violations occurred,” said Georgetown Law’s Sara Colangelo, a Justice Department enforcement lawyer from 2007 to 2015.

Clark wrapped up his time in the Trump administration with a burst of policy memos offering his parting thoughts on how agency lawyers should do their jobs. He reinforced his position on SEPs, set out limits on certain types of mitigation in enforcement cases, and outlined ENRD’s enforcement priorities and how it should exercise its discretion.

The memos drew criticism from outside lawyers, who took issue with some of the policies and the last-minute timing. Beveridge & Diamond PC attorney John Cruden, a highly regarded Obama-era ENRD chief and former career lawyer who’s usually reserved in criticizing others, couldn’t hold back frustration about Clark’s move.

“How sad that a Trump appointee would take it upon himself to write about his views and requirements on environmental enforcement only a few days before his administration vanishes into the sunset,” Cruden told Bloomberg Law last week. He added that the memos “will not survive long, but hopefully will be replaced by others who put a premium on aggressive, fair, comprehensive enforcement.”

Cruden issued at least two policy statements after the 2016 election—though not as close to the change in administration. They’re still in effect. Clark said he would have issued his recent memos sooner if he hadn’t been tasked with running the Justice Department’s Civil Division in his final months.

“These principles have guided me, albeit in less crystallized form since I started,” he said, referring to the new memos. “The enforcement section leaders at ENRD know this. There is no principle that says that at some distance before an administration ends, official actions cannot be undertaken.”