A woman walks down the stairs into a subway station on Jan. 25, 2016, in New York City.
Photo by Andrew Burton/Getty Images

Sen. , who lost her legs flying helicopter combat missions in the Iraq war, is waging a new fight: pressing authorities to deliver on a three-decades-old promise to make transit stations accessible to all.

The Illinois Democrat toured renovations at Chicago Transit Authority stations after her election to the Senate. The authority’s director was excited the accessibility project would be completed within two decades, Duckworth recalled in an interview.

“That’s how long this is going to take?” the senator asked at the end of the tour. “And he’s at the innovative forefront of transit authorities that are trying to do this,” she said of the director. For Duckworth, who uses a wheelchair, the visit underscored how little transit authorities make access for people with disabilities a top priority. 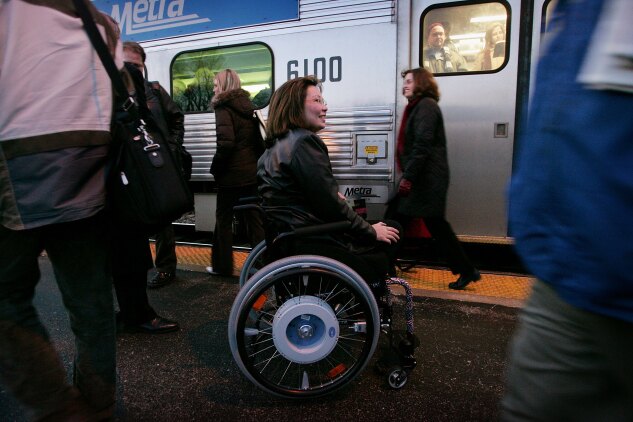 More than 30 years after the passage of the Americans With Disabilities Act of 1990, at least 18% of transit stations aren’t ADA-accessible, according to the most recent data from the Federal Transit Administration. Now, President Joe Biden’s push to advance equity through infrastructure offers an opening to make rail and transit more accessible, Duckworth and disability advocates say.

Duckworth said she wants $10 billion over 10 years for accessibility grants included in legislation to put in place Biden’s infrastructure package—instead of the $5 billion he proposed over a shorter period. She introduced a bill () on the issue last week.

“We’re never going to be able to make them fully ADA compliant until there’s a separate funding stream specifically for accessibility,” Duckworth said.

More than 25 million people have a travel-limiting disability, according to the Bureau of Transportation Statistics.

The senator compared the challenges of taking transit with a disability to those of racial inequality in the same systems. In Black and brown neighborhoods on Chicago’s South side, the L goes overhead but there’s no station, forcing people to take several buses to get to work, she said.

“It’s the same issue with people with disabilities with everything from the switching to a completely digital system for tickets, to wheelchair accessibility,” she said. “There’s built-in inequities within the system.”

Claire Stanley, public policy analyst at the National Disability Rights Network, said disability accessibility isn’t always the first thing people consider when talking about equity. Many legacy train systems in the U.S. are “antiquated,” she said, and the network supports legislation to fix that.

Accessibility in transportation has led to lawsuits. Earlier this year, Amtrak began accepting compensation claims for people with disabilities who used or couldn’t travel on one of their 78 stations that aren’t compliant. Under an agreement with the Justice Department, Amtrak said it would fix inaccessible stations and pay $2.25 million to victims. 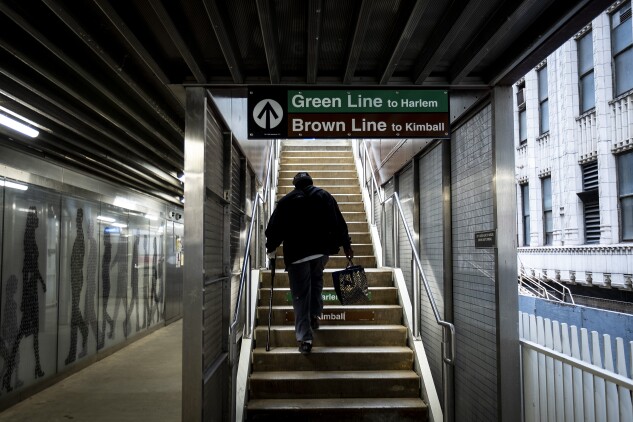 A commuter in a Chicago Transit Authority train station in Chicago, Ill. on June 3, 2020.
Photo: Christopher Dilts/Bloomberg via Getty Images

Sen. (D-Ohio), a bill cosponsor, said in a statement there’s “no reason that 100% of our transit systems shouldn’t meet or exceed ADA standards.” He leads the Senate Banking, Housing, and Urban Affairs Committee, which oversees transit.

Researchers say making legacy transit and transportation systems ADA-compliant can be expensive and labor-intensive, which is why it can take so much time—like the Chicago stations Duckworth visited. Jordana Maisel, director of research at the University of Buffalo’s Center for Inclusive Design and Environmental Access, said even lengthy projects often just offer “minimal code compliance.”

“Our center has done a lot of research over the years that really shows that even accessibility is not enough to meet the needs of a diverse population,” Maisel said. Accessibility standards were based on a very small sample of wheelchair users years ago—but a lot of the technology has changed and it didn’t address all areas, such as sensory disabilities, she said.

Democrats are the only cosponsors of Duckworth’s legislation and its House companion, from Rep. (D-Ill.). Duckworth said she is continuing outreach across the aisle.

She is also working to get the administration on board, which is focused on trying to get its “Build Back Better” plan through Congress. Nuria Fernandez, Biden’s nominee to lead the Federal Transit Administration, committed to working with her, Duckworth said.

“To truly ‘Build Back Better,’ it’s imperative that the federal government prioritizes transit and commuter rail accessibility so that every American can use our nation’s public transportation systems,” Duckworth said.