Firefighters spray foam on burning embers beside homes on Latigo Canyon Road in Malibu, Calif., in 2018. PFAS-laced firefighting foam from multiple states had been sent for destruction to an incinerator in upstate New York, raising concerns about local health and environmental effects.
Photographer: Frederic J. Brown/AFP via via Getty Images

When Joe Ritchie was a kid growing up near an upstate New York incinerator, it wasn’t unusual to find black soot on windowsills around the house. But in the last few years, there’s been a new odor in the neighborhood, that smells as if someone has been dumping household chemicals in a tub and lighting them on fire.

In February, Ritchie, found out the incinerator had been burning firefighting foam containing PFAS. About 2.5 million pounds of waste contaminated with the chemicals were shipped to the incinerator from more than two dozen states.

“When I saw that, I thought, oh my God. It’s like one of our worst fears come true,” he said.

The debate over how to dispose of persistent, ubiquitous PFAS chemicals has been heating up, but relatively little research has been done so far. The Environmental Protection Agency and others are now tackling the issue, but their conclusions can’t come soon enough for communities like Ritchie’s, where families may have already been exposed to the chemicals.

PFAS, or per- and polyfluoroalkyl substances, have been dubbed “forever chemicals,” owing to their persistence in the environment and presence in our blood. PFAS have been used for decades to manufacture nonstick and stain-resistant coatings in cookware, clothing, fast-food wrappers, carpets, firefighting foam, and other consumer and industrial products.

Ritchie and about 160 residents live in the Saratoga Sites public housing complex in Cohoes, N.Y., next to an incinerator owned by Norlite LLC, an affiliate of Tradebe Environmental Services LLC. Though the incinerator has operated for years, it only recently accepted waste contaminated by chemicals that have been popping up in drinking water supplies across the country.

Multiple states, including Massachusetts, Michigan, New Jersey, and Rhode Island, are collecting tens of thousands of gallons of firefighting foam that contains PFAS from airports and fire departments, often opting to destroy the foam through incineration. The Norlite incinerator accepted that type of waste for two years, through the end of 2019. 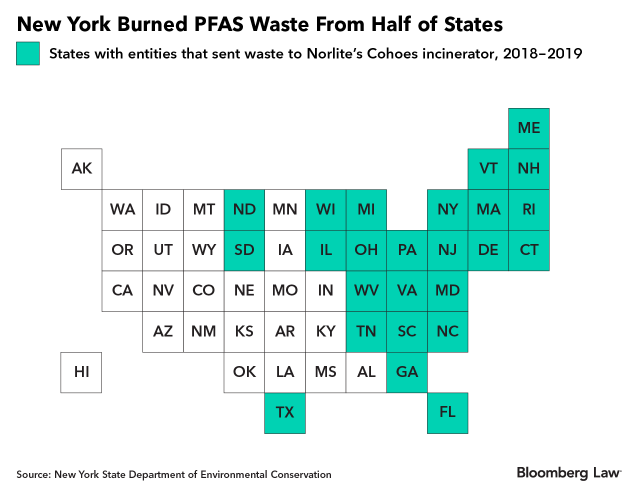 But little research has been done on the effectiveness of PFAS incineration, said David Bond, associate director of the Center for the Advancement of Public Action at Bennington College in Vermont, whose preliminary sampling in March found the chemicals in soil near the Norlite incinerator.

“One of the most striking things to us about this exploratory research was that nobody had asked the question before,” he said. “Nobody had asked if it was effectively breaking stuff down.”

Emerging data shows incineration may not be completely destroying the chemicals, but merely moving them from one place to another, spurring a new U.S. EPA research team and New York state’s effort to gauge and limit the public’s exposure.

Responsibility for destroying the “forever” chemicals is both a public health and legal burden, researchers and attorneys said. The entities collecting and getting rid of the chemicals—including the Department of Defense, states, and water utilities—could face environmental liabilities down the road if their chosen destruction method isn’t completely effective.

PFAS may cause adverse health effects, including developmental harm to fetuses, testicular and kidney cancer, liver tissue damage, immune system or thyroid effects, and changes in cholesterol, according to the EPA.

“We know these chemicals are toxic, they’re stockpiled across the country,” Bond said. “We’re turning to incineration that’s unproven.”

Bond’s soil and water testing near the Norlite facility indicated PFAS chemicals had drifted downwind, potentially affecting residents at Ritchie’s public housing complex. Bond acknowledged that with his testing limited by coronavirus pandemic and grant restrictions, he couldn’t definitively link the incinerator to the PFAS in the samples.

In December 2019, in response to the state’s request, Norlite agreed to stop incinerating firefighting foam, also known as aqueous film-forming foam, or AFFF. The Department of Defense has ended its incineration contract with Tradebe, according to the state and the company.

“Norlite has not received any AFFF material since December 2019, nor does Norlite have any AFFF material in storage and currently, we do not have shipments of AFFF scheduled into Norlite,” said Prince Knight, environmental and regulatory compliance manager for Tradebe. Knight declined to comment further.

The state has also taken issue with Bond’s research. His data didn’t support his conclusions, said Sean Mahar, chief of staff of the New York State Department of Environmental Conservation.

Bond’s data “showed no pattern of contamination, none of the chemical fingerprints typically found with PFAS-related [firefighting foam] contamination, no widespread evidence of contamination, questionable sampling protocols, and trace levels of PFAS typical of urban locations in New York State and beyond,” Mahar said.

The DEC is working with the state health department to do its own sampling, Mahar said.

The Cohoes city council in April passed a one-year moratorium on burning firefighting foam, which began May 1. State lawmakers also passed legislation that would, if signed by Gov. Andrew Cuomo (D), ban the burning of the material in Cohoes. A spokesman for the governor has said the governor’s office is reviewing the bill.

Sen. Chuck Schumer (D-N.Y.) asked the EPA to verify Bond’s soil and water test results, but the agency declined. In a letter, the agency agreed with the New York state environmental department that there wasn’t a clear indication of firefighting foam-related contamination in Cohoes. Even if there were, the contaminants aren’t necessarily coming from the Norlite incinerator, the EPA said in its response to Schumer.

Bond said the EPA reached out to him about his findings.

The effectiveness of burning as a way to destroy PFAS is “not well understood,” partially because there aren’t ways to measure the resulting air emissions, the EPA said in a February fact sheet. The agency also said it’s unclear whether burning PFAS can create other fluorinated byproducts.

He spoke at a Michigan Department of Environment, Great Lakes, and Energy webinar June 2.

Michigan’s PFAS Action Response Team has collected more than 30,000 gallons of firefighting foam from fire departments and airports around the state, according to the state’s June press release.

The state is opting to dispose of that waste by sending it to a landfill in Idaho to be solidified, according to Scott Dean, spokesman for the Michigan Department of Environment, Great Lakes, and Energy.

But the EPA is unsure to what extent PFAS are being incinerated across the country, because they aren’t regulated or documented under federal waste or air emissions laws.

The agency in May announced the creation of a “PFAS Innovative Treatment Team,” a group of research and development staff that would focus solely on ways to remove the chemicals from the environment and destroy them.

The agency declined repeated requests to make any member of the team available for an interview.

If someone hires a company to incinerate PFAS waste, the chemicals escape into the atmosphere, and the EPA formally recognizes the chemicals as hazardous, that person may be liable under federal Superfund law, he said.

“Those who spread contamination when they intend to clean up can face arranger liability,” he said. The incinerator operator could also be liable as an entity with control over the facilities that released the chemicals.

Many of the tanks and barrels of PFAS waste sent to Norlite came from Department of Defense installations, including Camp Lejeune in North Carolina and Joint Base McGuire Dix Lakehurst in New Jersey.

“If DOD arranges to have something incinerated, and the incinerator operation results in dispersal rather than destruction, DOD—like anybody else—could face those claims,” McNevin said.

The military has a long history of complicated waste streams, said Judith Enck, a visiting professor at Bennington College and founder of environmental advocacy group Beyond Plastics.

“Often their first move is just to find an incinerator somewhere that will take it,” she said, adding that it isn’t a responsible action if the PFAS isn’t destroyed when burned.

But Enck, a former regional administrator for the EPA, is skeptical the federal government will step up to address PFAS contamination. Though the EPA indicated in 2019 it plans to recognize some PFAS as hazardous, which is necessary to trigger liability under Superfund, the agency hasn’t yet released a formal proposal.

“I don’t think we’re going to see action from the federal government anytime soon, so the states need to protect their own residents and make sure that this material is not burned within state borders,” Enck said. 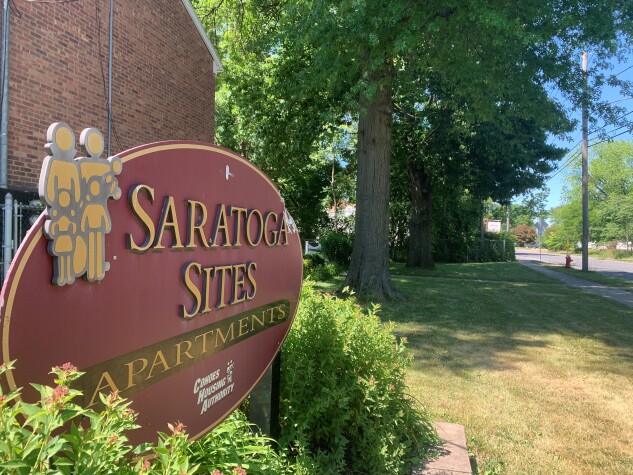 The white sign for Norlite LLC, a company that was burning PFAS-laced hazardous waste, can be seen several yards from Saratoga Sites, a public housing complex in Cohoes, N.Y.
Photographer: Keshia Clukey/Bloomberg Law

A group of concerned Cohoes residents, the Saratoga Sites Against Norlite Emissions, notified Norlite and Tradebe on June 23 of its intent to sue the entities under federal hazardous waste law. The group claims the incinerator could still be burning PFAS waste because its permit from the state doesn’t address PFAS emissions.

The residents’ legal representation, Rupp Baase Pfalzgraf Cunningham LLC managing partner Phillip Oswald, said his office intends to file a lawsuit in 90 days in U.S. District Court for the Northern District of New York if the incinerator doesn’t stop its PFAS emissions, which could be coming from other sources than the Department of Defense.

While the state takes a closer look at the Norlite incinerator’s permits, the city of Cohoes has asked state and federal officials to test its soil and water, and look into potential health effects on residents.

They live in an “industrial zone in the shadow of a hazardous waste facility,” said Cohoes Mayor Bill Keeler.

The state environment and health departments this spring sampled the municipal water supplies of Cohoes and nearby Green Island. They found no changes in PFAS concentrations over time, suggesting incineration wasn’t contributing to PFAS levels in the water. The state is now “evaluating next steps to further our investigations,” Mahar said.

City officials have been working to relocate Ritchie and his neighbors at the public housing complex, but many can’t afford to leave.

“We can’t do anything. We have to stay where we are,” Ritchie said.

Residents have long complained about the byproducts of burning at the incinerator, including sticky substances on bicycles and laundry getting dirty while hanging out to dry, Keeler said.

“This is an urban area,” he said. “It’s just not a good spot to be burning the firefighting foam unless, and until, the science is settled and it says it’s safe to do so.”

To contact the reporters on this story: in Washington at scarignan@bloombergindustry.com; in Albany, N.Y. at kclukey@bloomberglaw.com