Jim Franklin says his “MRI in the sky” tells him there’s a pool of oil bigger than an OPEC country’s in the central Nevada desert where no one has made a significant crude discovery in almost four decades.

That is crazy talk to some geologists, but also what’s behind the decade-long rush to lease millions of acres of federal land in the state. More federal land has been nominated, and then leased, for oil and gas exploration in Nevada during that period than in any state except Wyoming—even though little oil has been found.

The speculation reflects that it is virtually risk-free to get a federal lease, and that the wildcatting fantasies aren’t based on nothing. A 1983 discovery in central Nevada’s Railroad Valley became the nation’s highest-producing onshore well before drying up three years later.

“We know from satellite technology there’s an awful lot of oil in Nevada,” said Franklin, exploration manager for Las Vegas-based Western Oil Exploration Co., which in May obtained Nevada’s most recent drilling permit. “Nevada is going to explode here in the future.”

Jim Faulds, Nevada’s state geologist, said formations are too faulted and complex for there to be more than just a few scattered pockets of oil. “The geology of Nevada is not like the Permian Basin and other very rich oil and gas fields around the world,” he said.

Nevada is a hotbed of leasing both for fossil fuels and geothermal energy.

On Oct. 20, geothermal drilling rights to 35,632 acres across 18 parcels in western Nevada are scheduled to be auctioned by the Interior Department’s Bureau of Land Management. Oil drilling rights there are next up for bidding in December, when up to 10,673 acres could be auctioned, bureau documents show.

Anyone can anonymously nominate federal land for a lease sale, according to guidelines set by the land bureau, which oversees oil, geothermal and other minerals across more than 80% of Nevada’s land area. Anyone purchasing a federal oil and gas lease holds the drilling rights for 10 years.

Many leases in Nevada, including seven of the 11 auctioned in the bureau’s Sept. 8 sale, sell for the lowest possible price—$2 per acre. That means the smallest lease in the sale, at 642.9 acres, sold for $1,285.

Between 2009 and 2018, speculators nominated the equivalent of more land than the federal government owns in Nevada—58 million acres, BLM data shows. That includes land that isn’t available for leasing, or is being used for something else. 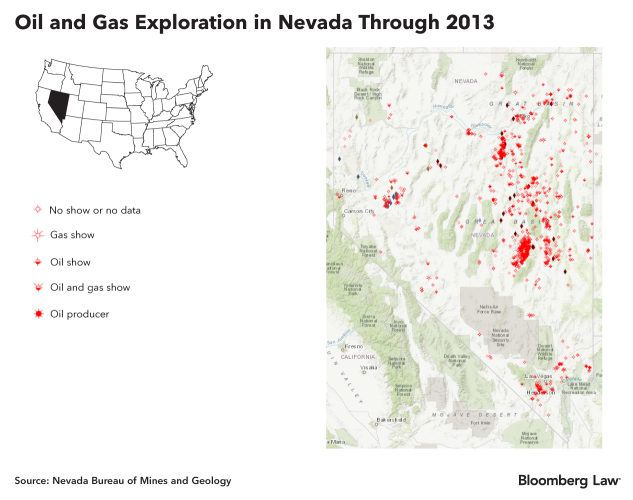 The land bureau’s Nevada spokesman, Rudy Evenson, and headquarters spokesman Derrick Henry declined to verify the data available on the bureau’s website, or answer questions about the data or leasing patterns in Nevada. Henry did note that many parcels can be nominated for a lease sale more than once if they aren’t included a particular sale.

“Also of note, nearly 90 percent of the acreage nominated for Nevada was during the Obama administration,” Henry said via email.

Land nominations are made by the public, not by administration officials. The land bureau does choose what to include in a lease sale, and the area leased declined steadily during the Obama administration. In fiscal 2009, which began during the George W. Bush administration, 804,000 acres of Nevada land were leased to drillers, dropping to 84,000 acres in fiscal 2016, during Obama’s last full year in office, the bureau’s data show.

The land bureau under Trump has offered nearly 1.9 million acres in 14 lease sales for Nevada since March 2017. But oil companies and speculators leased only 11% of that land as of Sept. 22, according to data on EnergyNet, the land bureau’s online lease auction house.

Franklin said major oil companies weren’t interested in Nevada during the most recent oil boom because they were focused on North Dakota’s Bakken shale formation and the Permian Basin in Texas, where wells need to be hydraulically fractured, or fracked. Most of Nevada’s oil is in “conventional” fields, which don’t need to be fracked and are more viable long-term, Franklin said.

He said he hopes the Nevada oil jackpot will pay off so he can raise money to help distribute a backpack-like device that would purify water for children. “We are drilling this well to save the world’s children,” Franklin said.

So the speculators keep coming, including Levi Sap Nei Thang, a self-described poet, entrepreneur, and “dreamer” originally from Myanmar, who is buying up oil leases to support family and other causes.

Thang won 10 of the 11 parcels offered in the Nevada auction as part of a four-month, $3 million oil, gas, and geothermal leasing spree on public lands across 13 states, as of Tuesday. She said she has no experience drilling for oil, isn’t working with partners, and isn’t yet sure she can ever develop the leases.

Franklin says his proprietary data from the satellite he calls “MRI in the Sky” could prove Faulds wrong.

“We detected an enormous oil deposit"—bigger than an oil field in Bahrain estimated to harbor billions of barrels of recoverable crude, Franklin said. The technology identified dolomite geology in eastern Nevada similar to the Bakken formation, Franklin said.

Western Oil is searching south of where , the only large oil company to invest in Nevada in decades, amassed rights to 350,000 acres and spent a few years exploring before pulling out in 2015.

The company left Nevada after telling investors that it reassessed the commercial viability of drilling there. Noble, which struck an agreement this year to be acquired by., didn’t respond to requests for comment.

But Franklin said he could use some help from the Trump administration to hit the oil jackpot in eastern Nevada. Franklin had a run-in with land bureau regulators who forced him to temporarily shut down his exploratory drilling operations due to desert dust problems.

“We think it’s very unfair we’ve been shut down,” Franklin said. “We need more help on this project.”

Western Oil ran afoul of land bureau, state, and county regulations, not just for kicking up dust, but also violating the terms of its oil and gas lease because the company staged equipment in unauthorized places, altered a county road without approval, and failed to buy state conservation credits for sage-grouse, land bureau spokesman Chris Hanefeld said.

Franklin said he has tried to resolve those environmental issues, adding that many of the problems were caused by other people.

Environmental groups routinely protest oil leasing in the state, including the 11 leases that were sold this month, increasing risk to drillers.

All 11 parcels were in basins with springs that harbor fish protected under the Endangered Species Act, and oil drilling there could contaminate the springs, said Patrick Donnelly, Nevada state director for the Center for Biological Diversity.

in January introduced a bill (S. 3202) that would try to stop the leasing of federal land considered to have low potential for oil and gas production. It would direct the land bureau to prioritize wildlife conservation, recreation, renewable energy, mining, and grazing on federal land in Nevada, Cortez Masto told Bloomberg Law in an email.

Nevada’s geology invites “black box” prospectors who think they have a special technique, French said. “That’s how I view the satellite work,” he said. “It’s fine and the science is OK, but the interpretation of what they find is where you have to be cautious.”

Other oil prospectors in Nevada have tried to use satellite data but it “hasn’t met with documentable success,” French said. “When you do find something, it pays off quite well.”

“That’s the nature of exploratory work when a company has a novel approach to an area and its geology. Sometimes it leads to further development and production, and sometimes it doesn’t,” Sgamma said.

Prospectors in Nevada are mainly limited to those who are “poking around,” whereas exploration in Wyoming is a “real business,” said Allan Matzke, a corporate accountant turned speculator who’s drilled two oil wells in Nevada.

The speculators want to duplicate the 1983 find that for a time produced more than 4,000 barrels of oil per day, according to a University of Nevada-Reno history of the state’s oil production.

“A lot of people don’t realize that that occurred, and we don’t think that’s an anomaly,” said Steve Degenfelder, land manager for Kirkwood Oil and Gas LLC of Casper, Wyo., one of five oil companies operating in Nevada.

Kirkwood operates wells in the Railroad Valley and purchased the only lease in the land bureau’s September sale that Thang didn’t buy.

“We wouldn’t be investing out there in new leases and trying to explore if we didn’t think there was justification based on some of the geology we’ve done,” Degenfelder said.

“Last thing you ever do in the oil and gas business is to say someone’s searching technique is flawed because you just never know.”

To contact the editors responsible for this story: at ayukhananov@bloombergindustry.com; at bkohn@bloomberglaw.com