Democrats took gubernatorial control in Maryland and Massachusetts, where incoming governors are set to carry out ambitious climate plans. In Michigan and Minnesota, new Democratic majorities aim to codify clean energy targets and fulfill other campaign goals on climate.

With divided government at the helm in Congress expected to bring new climate action to a halt, states will “play a crucial role” and “will once again be relied upon to keep climate and environmental action moving forward,” the National Caucus of Environmental Legislators said in an analysis.

Seventeen states now have Democratic trifectas, with the party controlling the governorship and both legislative chambers. Another 21 have Republican trifectas, and 10 are under split control. 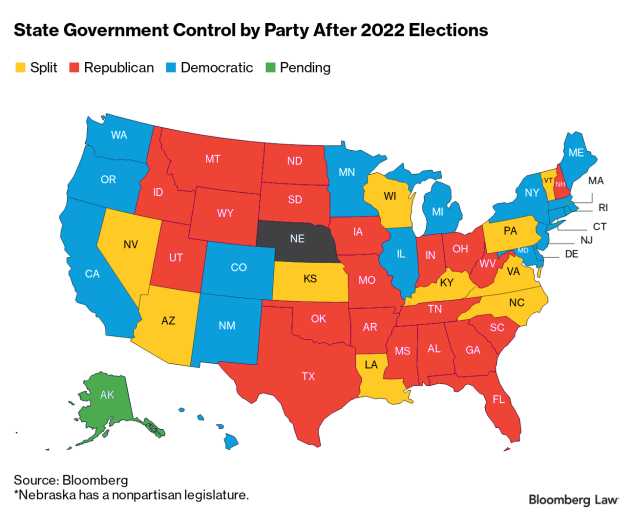 Democratic gains in the election give “legislators across the country the message that we need to keep going full speed ahead, doing everything we can to address climate change,” said Maryland Del. Lorig Charkoudian (D).

Democrat Wes Moore’s win for Maryland governor boosts Democrats’ confidence that the state’s landmark climate package, the Climate Solutions Act, will be fully implemented. It requires the state to reduce greenhouse gas emissions by 60% in 2031 and achieve net-zero emissions by 2045.

Maryland Democrats expect top posts in the departments of environment, energy, transportation, and the state’s utility authority to be filled by climate-friendly appointees that aim to fulfill the Climate Solutions Act.

Term-limited Gov. Larry Hogan (R), whom Moore will replace, had called the measure a “reckless and controversial energy tax” and opted to let it pass in April without his signature, facing Democratic supermajorities in the Legislature who could overturn a veto.

“A lot of progress has been the state Legislature pushing, pushing, pushing and then overriding vetoes,” Charkoudian said, “wrestling with state agencies that are not necessarily on board.”

In his campaign, Moore expressed interest in signing bills once vetoed by Hogan focused on environmental equity, including a measure to promote energy efficiency upgrades and weatherization for low-income households.

“We’re not going to be worried about vetoes anymore,” Charkoudian said.

Those include flex funds available to the state transportation department that could be used to build out pedestrian, bike lane, and electric vehicle charging infrastructure, instead of traditional uses like highway construction.

“You need forward-thinking executives to go after all the competitive funds and make sure they’re getting to the projects and the communities that are going to benefit the most from an environmental justice perspective and from an overall emissions reduction perspective,” said Justin Balik, state program director for Evergreen Action, a national climate advocacy group.

Implementation of federal and state climate dollars is also an area in which Gov.-Elect Maura Healey (D) is poised to break from Massachusetts’s current governor, moderate Republican Charlie Baker.

Healey will be responsible for carrying out Massachusetts’s goal to reduce greenhouse gas emissions by at least 85% by 2050. Her administration will also implement the Drive Act’s landmark investments passed this summer in clean energy, offshore wind, solar, and transportation.

Healey, the state’s current attorney general, is set to fill seats on the Massachusetts Department of Public Utilities with members who are more sympathetic to changes to promote renewables like rooftop solar and raising net metering caps.

“I expect to see a more consumer-oriented approach related to energy utility regulation in Massachusetts,” Cyr said, “and those specifics are going to matter.”

State Rep. Jamie Long—who chairs the House Climate and Energy Finance and Policy Committee and will become the body’s majority leader—said that starts with codifying a 100% clean energy by 2040, a long-held goal that the Republican-led Senate had blocked.

Attempts had stalled in the Republican-led Senate but now have a real chance of making it to the governor, Long said in an interview.

“We had to defend that policy year after year against a Republican Senate,” Long said, “but now I think we get to move beyond that and actually help support the actions of the governor,” with legislation to deploy more electric vehicles and build out charging infrastructure to go on the offensive.

Balik of Evergreen Action said many candidates’ choice to lean into climate action in their election pitches “represents a sea change from some of the political dynamics in the past.”

On top of the four states where Democrats gained full control, the party also won the Arizona governor’s race and could flip the Pennsylvania House.

A victory in Pennsylvania could stymie Republican attempts to exit the Regional Greenhouse Gas Initiative, an interstate cap-and-trade program, though Gov.-elect Josh Shapiro (D) has been noncommittal on continuing RGGI.

Democrats gained supermajorities in the Vermont Legislature, where lawmakers could have enough votes to override the Republican governor’s veto of a clean heat standard, a significant climate law to lower building emissions that was blocked earlier this year.

The party prevented Republicans lawmakers from winning supermajorities of their own in North Carolina and Wisconsin.

Only in Nevada did Republicans wrest a governor’s seat from a Democratic incumbent. Democrats there are projected to expand their majorities in both houses of the state Legislature.

To contact the reporter on this story: at zbright@bloombergindustry.com