Mt. Baker in the North Cascade Mountains from the Skagit Valley in Washington state.
Photographer: Wolfgang Kaehler/LightRocket via Getty Images

Cyrq Energy Inc. is seeking a geothermal energy “moonshot” on the slopes of Mt. Baker, a volcano in Washington State where the company hopes to refine drilling technology that could help spread geothermal power across the U.S.

The company plans to bid on two leases in a national forest near Mt. Baker east of Bellingham, Wash., in a June 30 Bureau of Land Management geothermal lease sale—the Interior Department’s first geothermal leasing outside of California and Nevada since 2016.

Deep drilling would enable the companies to tap extreme temperatures—heat above 662 degrees Fahrenheit (350 degrees Celsius)—so that heat can replace natural gas and coal for both electric power generation and home and industrial heating, Petty said.

“If we can get those really high temperatures and can engineer extraction of the heat, that can compete with fossil fuels for energy density,” Petty said. “Once you get into this and know how to do it, you get into innovative drilling technology, which would allow us to do this pretty much anywhere.”

Mt. Baker and Mt. St. Helens are both considered geothermal energy hot spots, where scientists have discovered high temperatures close to the surface.

The upcoming lease sale and Cyrq’s development goals there are “highly significant” for the future of geothermal energy in the U.S. because it is currently focused on California and Nevada but has the potential to be expanded throughout the country, said William Pettitt, executive director of the Geothermal Resources Council, a trade group.

Geothermal energy, which represents a tiny fraction of the U.S. electric power supply, is part of some states’ clean energy and climate change goals, including California, Nevada, and Washington. Those states passed laws requiring all their power to come from clean sources in the coming decades. 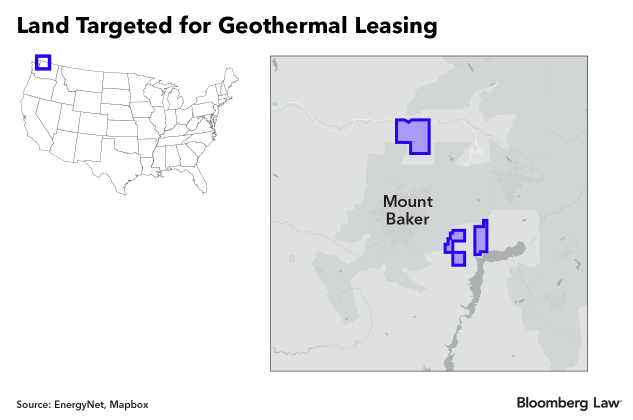 Federal geothermal leasing has focused on California and Nevada, where geothermal energy is plentiful. In 2014, the BLM attempted to conduct the first of two geothermal lease sales outside of those two states in Oregon, but it received no bids. The bureau held another geothermal sale in Utah in 2016.

Geothermal is the source of about 9.5 percent of Nevada’s electricity and about 5.6 percent of California’s electric power supply, according to the Energy Information Administration. Little or no geothermal electricity is generated in Washington state.

Market Not Yet Right

Though the “moonshot” is a long way off, Petty said Cyrq is hoping to produce geothermal energy on the slopes of Mt. Baker sooner than later to demonstrate that geothermal can contribute to Washington state’s clean energy goals.

But it could be years before the market is right for companies to begin geothermal energy production in the area, said Adam Lewis, a senior utility analyst for the Snohomish County Public Utility District, a local utility that nominated federal land beneath Mt. Baker for geothermal leasing.

Plentiful, low-cost natural gas and cheap renewable energy sources have created a market in which there is very little push to develop geothermal, Lewis said.

And Washington state, which relies heavily on hydropower for its electricity, has yet to fully build out solar and wind energy infrastructure that would be cheaper to develop than geothermal, said Hilary Franz, Washington state’s public lands commissioner.

There is currently more incentive to focus on developing less expensive clean energy sources that haven’t fully been tapped than on geothermal energy, Franz said.

“We’re going to go ahead with our exploration,” Petty said, adding that Cyrq is hoping to strike an electric power purchase agreement with a local utility soon.

The geothermal leasing at Mt. Baker is moving ahead with support from environmental groups.

The land up for lease on June 30 is mostly within a designated roadless area containing old-growth forest adjacent to a protected wilderness within the Mt. Baker-Snoqualmie National Forest near North Cascades National Park.

The BLM and the U.S. Forest Service have been laying the groundwork for geothermal leasing there for years, but until recently, the agencies hadn’t made progress on conducting the lease sale since 2015 when the Forest Service completed an environmental assessment for the plan.

The U.S. Forest Service officially consented to geothermal leasing last October, and the BLM then began moving ahead with the sale, BLM spokesman Derrick Henry said.

In May, the BLM issued a finding that the lease sale would have no significant environmental impact and then scheduled two parcels totaling 8,483 acres for auction June 30.

But the BLM and Forest Service have allayed those concerns and granted the groups most of what they were seeking by stipulating that any land development related to geothermal energy production be kept out of the roadless area, Uniack said.

The lease sale was delayed five years in part because the agencies needed to re-write the lease’s land use stipulations to more closely align with stipulations on oil and gas leases, which are more restrictive and do more to protect the environment, said Todd Griffin, the U.S. Forest Service’s geologist for the Mt. Baker area.

Roadless land was included in the leases up for auction so companies can drill at an angle and access the geothermal resources underground for a distant site, Griffin said.

That way, the roadless land is protected, he said.