The late Elijah Cummings' desk at the House Committee on Oversight and Reform room is adorned in black to honor his passing.
Photographer: Olivier Douliery/AFP via Getty Images

Rep. Elijah Cummings, a longtime Maryland Democrat best known for his role as the top congressional watchdog of the Trump administration, was a chief force in propelling the Flint, Mich., water crisis to the national stage.

Cummings, chairman of the House Oversight and Reform Committee, died early Oct. 17 from a prolonged illness at 68. He was a leading figure in the impeachment inquiry into President Donald Trump. 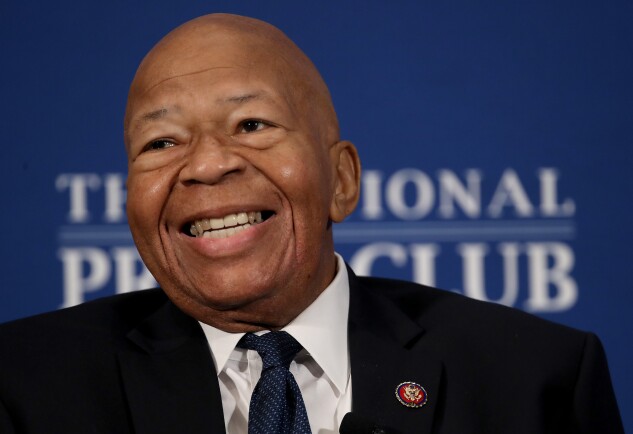 In 2016, Cummings represented Democrats in a series of high-profile hearings on the government missteps that left Flint, a city of nearly 100,000, with lead-contaminated drinking water.

“He is a hero in Flint,” Rep. Dan Kildee (D-Mich.), Flint’s congressman, told Bloomberg Environment. Cummings was among the first members of Congress to visit the city, where he spoke to residents to prepare for the oversight hearings on the disaster.

Before his visit to Flint, the political figures involved in the crisis had largely escaped scrutiny, Kildee said. The hearings got then-Michigan Gov. Rick Snyder (R), former Environmental Protection Agency Administrator Gina McCarthy, and other officials to lay out what they knew about the problems in Flint, and when.

“His role was not only to bring moral outrage,” Kildee said. “It practically made a difference.”

For close to two years, Flint residents had complained about foul-smelling drinking water, health problems, and other issues with little response from local, state, and federal authorities. In 2014, the city began sourcing its water from the Flint River, a change that corroded old lead pipes and contaminated the tap water.

‘You Need to Resign’

In an emotionally charged hearing in March 2016, Cummings held Snyder to task for only addressing the problem years after the first complaints of foul water from residents, and after children were found with high lead levels in their blood.

“There are children that got to live with it, the damage that has been done for the rest of their lives. And it is painfully painful to think that a child could be damaged until the day they die and that their destiny has been cut off and messed up,” Cummings told Snyder.

“You cannot be trusted, and I got to tell you, you need to, you need to resign,” Cummings said to loud applause.

Cummings was particularly sensitive to problems that caused harm to children, Rep. Brenda Lawrence (D-Mich.), a member of the Oversight Committee whose Detroit-area district isn’t far from Flint, told Bloomberg Environment. Lawrence said Cummings wanted to look into the problem of lead poisoning in the country.

“He would tell me, ‘This isn’t over yet, Brenda, we’ve got to keep fighting for this, because this should not be happening in our America,’” she said.

As the ranking member on the Oversight Committee to Republican Chairmen Darrell Issa (Calif.) and Jason Chaffetz (Utah), Cummings served as a foil to GOP criticism of the Obama administration’s energy and environmental policies.

“I do not believe you are obstructing anything,” Cummings told McCarthy during a 2014 hearing on the agency’s development of its Clean Power Plan to lower greenhouse gas emissions from the power sector. “I do not believe there is a conspiracy with the White House. I believe that the EPA has been responsive” to the committee.

As the representative for Baltimore and surrounding areas, Cummings was also a supporter of efforts to clean the Chesapeake Bay, co-sponsoring a bill this Congress to authorize more funding for the EPA’s Chesapeake Bay Program.

“He was a towering force for good, a champion of truth and justice for all, and a great friend and defender of the Chesapeake Bay,” Chesapeake Bay Foundation President William C. Baker said in a statement. “His wisdom and leadership will be sorely missed.”

(Adds comment from Rep. Brenda Lawrence in paragraphs 11 and 12.)