Officials across the nation are worried that as the coronavirus pandemic persists, commuters will avoid taking buses and trains, and opt for their cars, potentially leading to dangerous new levels of air pollution.

More cars on the roads in congested urban centers like New York City—the virus epicenter in the spring—Washington, San Francisco, and Philadelphia means more emissions of smog-forming pollutants and poorer air quality. That could cause some cities to miss federal standards for ground-level ozone, which in turn could mean losing federal highway dollars at a time of already declining local revenues.

“If a significant number of people decide to drive to work then we could have congestion, and traffic, and air quality issues,” said Kristine Roselius, spokeswoman for the Bay Area Air Quality Management District, which represents the nine counties that make up San Francisco.

Mobile sources like cars are a significant factor in ground-level ozone, a chief component of smog that is linked to respiratory illnesses. Major urban centers like San Francisco are already struggling to meet federal ozone standards of 70 parts per billion of air, even without any unexpected spikes in drivers on the roads.

Exceeding ozone limits can prove costly for localities, which would have to rewrite their emissions reductions plans to factor in the increased pollution. While unlikely, a decline in air quality could ultimately lead to a loss of federal highway dollars for much-needed improvements if those revised plans aren’t met.

The decision of how to travel during the pandemic is tough for people like Brooklyn-based artist and public school teacher Caroline Sykora. Riding the New York City subway to the Claremont International High School in the Bronx starting in September means she risks getting coronavirus, and perhaps infecting dozens of immigrant children. But buying a car to her means contributing to pollution.

She is choosing to drive.

“Everything in my bones protested against the decision because it isn’t good for the environment,” said Sykora, an avid bicyclist who thinks nothing of riding an average of 80 miles a day. But “we are all traumatized by Covid-19,” the 52-year-old teacher said, referring to the disease caused by the coronavirus.

The Washington region has to show compliance by Oct. 31, the end of its ozone season, said Stephen Walz, environmental programs director for the Metropolitan Washington Council of Governments, which represents the District of Columbia as well as Maryland and Virginia counties.

If not, Walz said, the region could be downgraded to a moderate level of violation, prompting more stringent controls than it already has on emissions from major air pollution sources like power plants and other industrial facilities.

“Any changes in ozone levels measured this year can affect our compliance,” irrespective of whether the levels decrease, Walz said.

New York, which is classified as having worse air quality than the Washington region, has until late summer 2021 to submit a plan to reduce ozone levels, and then till late 2024 to show compliance.

Because New York City is classified as having worse air quality, it has until late summer of 2021 to submit a plan to the EPA to reduce ozone pollution, and then till late 2024 to show compliance. The state’s Department of Environmental Conservation said the region’s air quality corresponds to changes in emissions from vehicles and industrial activity, including upwind emissions from neighboring states.

The state said changes in air quality are tracked over the long term, as short-term changes in emissions aren’t easily detected and are affected by other factors, such as wind speed and the strength of the sun.

As of June 24, ridership levels in the country’s most populous city are still a long way from reaching pre-pandemic levels, with trains hovering at 81% of year-ago average ridership, and buses at about half of last year’s levels.

The Centers for Disease Control and Prevention guidelines for using rail and bus have reinforced fears among regular riders, by recommending social distancing that is nearly impossible on crowded platforms or cars.

Bronx-based Gina Lee, a 51-year-old actor, is among those who gave up riding buses and trains when the pandemic surged in the city.

“I am walking everywhere and avoiding the buses and subway,” Lee said. “At least I have some control when I am walking. You can’t control who gets on the subway, and everyone’s in a rush.”

People shifting from transit and buses to cars is “obviously a concern for us,” said Matt Maloney, acting director for the integrated planning department at the San Francisco Bay area’s Metropolitan Transportation Commission.

Amid stay-at-home orders, vehicle miles traveled fell alongside drops in ridership, down as much as 82% in the Bay area compared to mid-February, according to San Francisco-based StreetLight Data Inc., which collects and analyzes anonymous location records from GPS and smart phones in cars and trucks. Similar drops were recorded in other major cities like New York City, Washington, and Philadelphia. 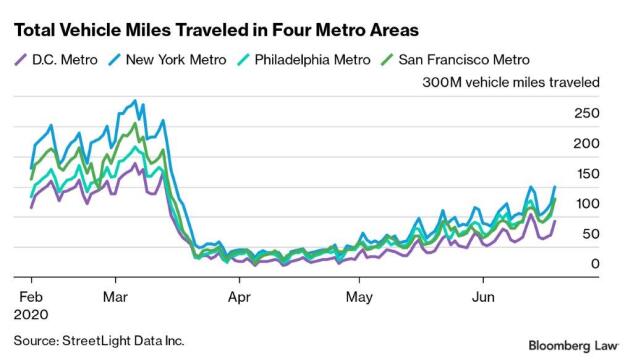 Now that stay-at-home orders are lifting, vehicle use is recovering more quickly than use of public transport.

Vehicle miles traveled in Washington, D.C., New York, and San Francisco are still 35% below pre-Covid levels. But StreetLight data indicates they increased sharply in the last month, rising nearly 70% since June 1 in D.C. and New York—and nearly doubling during that time in the Bay area. Philadelphia levels are now 18% below those pre-pandemic, and up 80% since June.

“These metrics certainly confirm what we’ve all anecdotally observed on our cities’ streets heading into the summer,” said Martin Morzynski, StreetLight’s vice president of marketing.

One in Five Drives to Work

Before states imposed state-at-home orders in mid-March, one of every five trips by car was made by a person commuting to or from work, said Bill Eisele, senior research engineer for Texas A&M Transportation Institute, who studies urban mobility.

The number of cars on the road may be increasing in part because more people are returning to work as businesses open, but also because others want to get out. Apart from essential workers, there are people “who are just tired of staying at home,” Eisele said.

Abiola Heyliger, a disability rights advocate in Takoma Park, Md., is considered essential and has had to go to work at Independence Now Inc., a nonprofit that promotes equal access for people with disabilities in Maryland’s Montgomery and Prince George’s counties.

Before the pandemic, Heyliger, who lives with the systemic autoimmune disorder lupus, relied on Washington’s metrorail and bus network. But now, public transportation isn’t an option because of her illness, the 49-year-old said.

Instead, she must rely on two imperfect options that add to higher vehicular emissions: Metro Access, a public van service for people with disabilities that she says has an erratic schedule, and—as a last resort—ride-sharing services like Uber and Lyft, which can get pricey.

Johanna Zmud, a senior research scientist and director of the multi-modal planning division at the Texas A&M Transportation Institute, said the decline in automobile use during the pandemic was tempered by an uptick in truck volume, as well as cars and vans making deliveries to homes.

Zmud said the big question was whether increased driving, and less public transit use, continues in the future—something that will depend on how states emerge from lockdowns.

For the summer, Zmud expects people to mostly work remotely, but also to increase leisure travel by car. In Georgia, for example, Zmud said there is evidence of car travel from neighboring states.

In New York, Washington, D.C., San Francisco, and Philadelphia, which have well-established rail and bus networks, officials are banking on employers allowing people to start work at staggered hours so cars don’t hit the road all at once.

Philadelphia is relying especially on the use of telework to “slow down that rush to cars, back to roads, and back to work,” said Sean Greene, air quality manager for the Delaware Valley Regional Planning Commission, the planning agency for the nine-county Greater Philadelphia region.

Following the CDC guidelines, New York’s MTA has posted a 13-point reopening plan that includes deep cleaning and disinfecting trains every night, requiring riders to wear masks, providing hand sanitizers at every station entrance, and working with businesses to stagger work hours. Each of the four urban centers is pursuing a similar approach.

“That’s why we are working on transportation electrification and reviewing teleworking policies with colleagues with an even greater sense of urgency,” Grumbles said.

And San Francisco Bay Area’s “Spare the Air” campaign, which in the past has focused on carpooling and transit use, is now urging telework, according to Maloney, from the area’s Metropolitan Transportation Commission.

Both Eisele and Zmud say they expect congestion will return to roads in the long term, but for the immediate future they expect many people will stay at home and telework, and shop online as they have grown used to it.

The Environmental Protection Agency will assess the effects of a nationwide pause and reopening on air quality after states submit air pollution data for the 2020 ozone season by May 1, 2021. Ozone season typically runs from April 1 to Oct. 31.

Until the EPA receives and reviews the complete monitoring data from states, the agency told Bloomberg Law “it would be premature to speculate on any effect the reopening or, for that matter, the initial closures would have on areas meeting the 2015 [current] ozone standards and being redesignated to attainment.”

Since all four cities are slowly emerging from the lockdowns, officials say it is difficult to get a handle on the emissions profile.

For instance, Covid-19 related lockdowns were responsible for a 15% to 18% drop in nitrogen oxide emissions, an ozone precursor, in Maryland’s urban areas, including its suburbs of Washington, D.C., according to the Maryland Department of the Environment’s preliminary estimates of air pollution data recorded between March 14 and May 18.

But whether that drop in emissions is maintained remains to be seen, Walz said.

One challenge for transportation and air quality planners is to persuade people going forward that public transit won’t pose a threat to their health.

Sykora, the teacher, remains unpersuaded by New York City officials. She said the city took a long time to close public schools despite the surge in coronavirus cases—and only after Sykora and other teachers went on a strike of sorts that she described as a “sick-out.”

But Lee, the Bronx-based actor, plans to don her mask and risk using the bus or the subway to get around to various gigs across the city.

“Of course I am worried,” Lee said, adding that her plan is to take either the bus or the train at non-peak travel times. “If I have to wait a few hours then I will. By then, I hope it will be less crowded.”

—With assistance from Sylvia Carignan and Christina Brady.

To contact the reporter on this story: in Washington at asaiyid@bloombergindustry.com

Amena H. Saiyid
Reporter
Pollution Set to Fall in EU This Year to the Lowest In Decades
Biggest Fall in Global Emissions Shows the Limits of Individual Action
U.S. Emissions Set for Record Dive With Factories and Cars Idled
The Car Is Staging a Comeback, Spurring Oil’s Recovery (1)
© 2022 The Bureau of National Affairs, Inc.
All Rights Reserved