For an interstate natural gas pipeline, it was small but mighty: The 65-mile Spire STL Pipeline transformed the flow of gas in the St. Louis metro region when it came into service in 2019, bringing a promise of lower bills and better reliability to some 650,000 utility customers.

Now, federal energy regulators—following a scathing court mandate this year—are being forced to consider whether the pipeline construction was even necessary in the first place.

The pipeline was developed by an affiliate of the St. Louis-based gas utility, Spire Missouri, using a partnership common in the pipeline boom in the last two decades. But the U.S. Court of Appeals for the District of Columbia Circuit found that the Federal Energy Regulatory Commission failed to scrutinize the arrangement adequately when FERC approved the line in 2018.

The surprise ruling, which sided with the Environmental Defense Fund and vacated FERC’s certificate for the project, has thrown the future of the already-operating pipeline in jeopardy. And it’s raised alarm bells in the gas industry that federal officials will likely probe deeper—and with more skepticism—into the necessity of new pipelines.

“I don’t think it could be overstated how important the D.C. Circuit decision is,” said Gillian Giannetti, an attorney for the Sustainable FERC Project at the Natural Resources Defense Council, which has argued against the need for new pipelines.

The June decison came as a major win for environmental groups who have argued against affiliate contracts in much larger pipeline projects, claiming pipeline developers were “self-dealing” and manipulating FERC’s reviews.

“The corporate relationship that is at the core of that case is something that replicates in other cases and has been a problem when it comes to determining whether a pipeline is actually needed,” Giannetti said.

The court “drew a line in the sand about the relationship of affiliate contracts and FERC’s failure to properly evaluate contrary evidence,” he said.

Spire, meanwhile, warned of “irreparable harm” to Missouri consumers who could face gas shutoffs this winter if the pipeline shuts down. 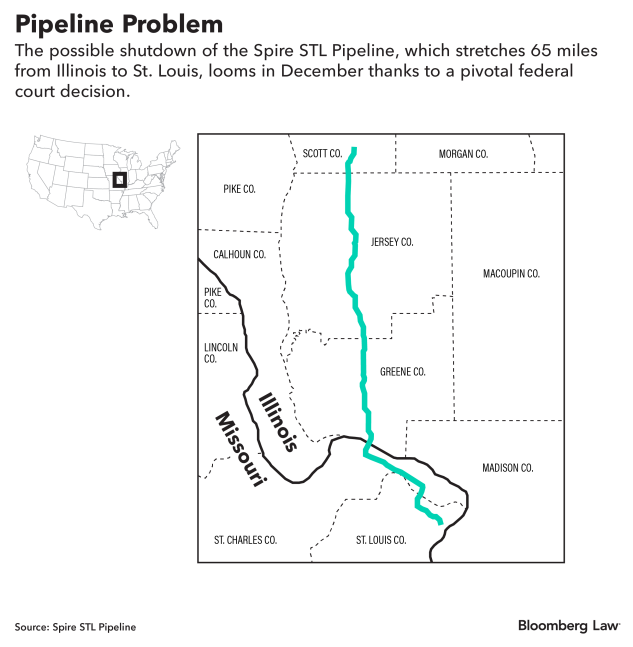 The Spire pipeline stuck out to the D.C. Circuit because it challenged the crucial first prong of FERC’s review of new natural gas facilities, legal experts said in interviews—to consider the economic need for the project.

Pipeline developers have shown evidence of need by obtaining precedent agreements, or contracts for certain portions of the pipeline’s capacity. The commission then weighs the project’s economic need against any environmental impacts.

Many projects have advanced with pipeline developers entering into contracts with affiliated entities. The arrangement could be a joint venture between two established companies or one company that owns the pipeline development as well as a gas-consuming distribution utility or power plants. Federal regulators allow pipeline developers a return on investment of up to 14%.

“It is not uncommon to have a precedent agreement between a buyer and seller that are affiliates,” Susan Tierney, senior adviser for the Analysis Group, a Boston-based consulting firm.

However, Spire took that arrangement further than most projects, experts said.

Spire STL Pipeline LLC had only one contract: with an affiliate, Spire Missouri Inc., for 87.5% of its capacity. And the developers acknowledged in its initial 2017 application to FERC that natural gas growth would remain flat in the St. Louis region.

It is “almost always the case that, over the last 20 years, if a pipeline has a precedent agreement with anybody — affiliate or not — FERC just says the pipeline is needed, without looking further,” Tierney said.

Spire argued a new pipeline would bring benefits in the form of lower energy costs and bolstered reliability. The Republican-led commission approved the certificate in a 3-2 vote, over the dissent of two Democratic commissioners — including current FERC Chairman Richard Glick.

The three-judge D.C. Circuit panel in June ruled FERC ignored evidence of ‘self-dealing’ and failed to seriously weigh the need for the pipeline when it approved the project.

VIDEO: We look at the series of high profile legal setbacks that has some in the industry asking—is it still possible to build pipelines in America?

So why is self-dealing to such an extent frowned upon?

A 14% return on investment is like “winning the lottery,” for pipeline builders and their partners, said Jennifer Danis, a senior fellow at Columbia University Law School’s Sabin Center for Climate Change Law. And the handsome return on investment can drive utilities to create pipeline affiliates that can pass the costs along to ratepayers, Danis said.

“Showing why it’s actually economically harmful is really much more persuasive to FERC,” she said. “We’re not coming in there as environmentalists.”

The Spire case orders FERC to parse pipeline contracts at a time the commission is already reviewing its 1999 gas pipeline certificate policy. Before that review concludes, the commission could see the confirmation of a third Democrat, Willie Phillips, who would give Democrats a majority for the first time since 2017.

The Spire ruling is likely to push developers to provide a market study showing increased demand for gas. FERC may also account for renewable energy goals and the future energy mix of a particular region, they said.

“When you get to cross rivers, you get to condemn people’s homes and farms, you get to take land—then this idea of having to serve the public really gets highlighted for the courts,” Danis, of Columbia University, said.

The modern-day shale gas boom shifted the market dynamics and led to debates about the need for more stringent regulatory review, said Cheryl LaFleur, a former FERC commissioner who joined Glick in opposing the Spire certificate in 2018.

The Natural Gas Act was designed during the 1930s to spur the transportation of gas from production hubs in Texas and surrounding areas to the rest of the country.

“Now that there are huge shale plays across the country, the thought that any time you had a contract in hand you could build a pipeline, could lead to pipelines being approved that might not meet a more developed need standard,” LaFleur said in an interview.

Any changes to FERC pipeline reviews could mark a significant change for developers. FERC has approved nearly 500 pipeline projects under the 1999 policy. These projects span about 23,000 miles of new pipeline and have the capacity to move about 285 billion cubic feet a day of gas, according to FERC data.

“There is not precedent out there for this specific situation,” Myles Reynolds, a Dallas-based energy partner with Hunton Andrews Kurth, said.

“There are different types of evidence FERC may require going forward.” Reynolds said. “I think there are more question marks out there.”

If FERC broadens requirements on the economic-need test, it could alter the way it balances environmental impacts on the other side of the equation.

Pipeline projects, already faced with litigation over environmental concerns, could find it insurmountable.

Pipeline developers are thinking: “How can I do this as just an expansion of capacity with some added compressor stations, rather than going the route of a big diameter pipeline in the ground,” said Brandon Barnes, a senior litigation analyst for Bloomberg LP.