The renewable-energy industry could create more than a million jobs a year if countries invest enough to meet their target for cutting global carbon emissions, according to an advocacy organization.

Solar, wind and other forms of green energy could add 42 million jobs by 2050 if nations spend more aggressively to limit the increase in average global temperatures, the International Renewable Energy Agency said.

Governments should not relax their efforts even though air pollution has abated in places as a result of the coronavirus’s impact on economic activity, the Abu Dhabi-based agency said in a report released on Monday.

“This year will be very special because emissions will be decreasing,” Irena Director-General told reporters in a conference call. “But we have to be very careful about any rebound effect that can bring us on the wrong path. What we are calling for is to avoid the wrong policies that may compromise this vision of the future.”

Under the 2015 Paris climate accord, governments aim to limit the increase in temperatures this century to less than 2 degrees Celsius (3.6 degrees Fahrenheit). The use of fossil fuels is widely blamed for contributing to global warming, and Irena promotes renewables as a way to minimize climate change.

Oil futures fell on Monday to the lowest in more than two decades, on concern the world is rapidly running out of places to store crude after output cuts proved insufficient to cope with plunging demand. Volatility in oil prices will probably discourage investments in unconventional sources of crude and natural gas, La Camera said.

“Investors will look for investments that provide for more resilience in the economy,” he said. “We think this will make renewables more convenient.” 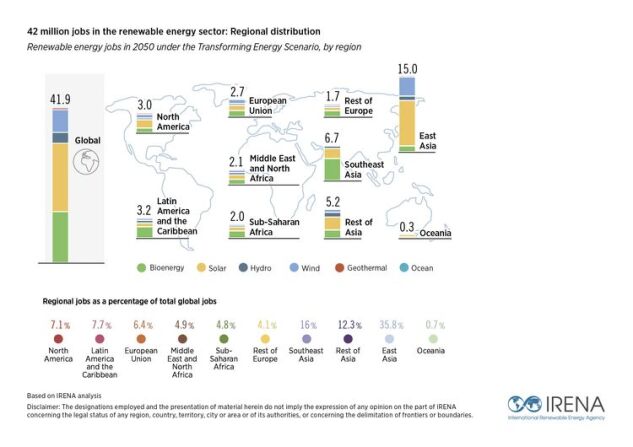 To contact the reporter on this story:
in Abu Dhabi at mhabboush@bloomberg.net

To contact the editor responsible for this story:
at nrazzouk2@bloomberg.net