The Hoover Dam in the Black Canyon of the Colorado River on the Arizona-Nevada border. Completed in 1936, the dam and its powerplant took more than 4 million cubic yards of concrete to build, enough to pave a highway from San Francisco to New York City, according to the Bureau of Reclamation.
Photographer: Joe Klamar/AFP via Getty Images

President Joe Biden’s goal of halving greenhouse gas emissions by 2030 doesn’t square with his plan to rebuild the nation’s crumbling roads and bridges, unless he rethinks the main ingredient in virtually every major infrastructure project in U.S. history: concrete.

Concrete is responsible for at least 7% of climate-change-fueling carbon dioxide emissions worldwide, according to clean energy research group BloombergNEF. Other groups, such as the Yale School of the Environment, put that estimate even higher, at 8%.

While cleaner “green concrete” is being used in states—including some that are dangling tax credits for builders to adopt the new materials—the White House hasn’t insisted on its inclusion in federal projects or highlighted concrete’s carbon footprint as prominently as it has the impacts of gas-powered cars and fossil fuel-based energy.

“It’s bizarre that it hasn’t come up more,” said Gregor Robertson, the former mayor of Vancouver, British Columbia, which recently adopted a plan to cut the carbon content of materials for new construction projects. “You have a huge infrastructure plan, but you’re not making a bold climate action commitment.”

The stakes are also being elevated by ongoing talks between the White House and congressional leaders on what could rank among the nation’s largest-ever infrastructure spends.

“You only get to build that giant project, that road, once,” said New York state Sen. Todd Kaminsky (D), who wrote one of the nation’s most ambitious green concrete bills. “You can’t just switch the concrete out a few years from now. So the sooner we get these preferences in place, the better.”

While Biden’s original plan called for more than $2 trillion in spending, even a compromise infrastructure package would be expected to fund the pouring of millions of tons of new concrete for everything from roads and bridges to ports and waterways.

Switching to a cement that’s even 10% to 15% less carbon intensive, and just for the highway and bridge modernization part of the Biden plan, would cut emissions by the equivalent of taking 500,000 to 750,000 cars off the road for a year, the Natural Resources Defense Council estimates.

“Not doing that is an enormous missed opportunity,” said Sasha Stashwick, senior advocate at NRDC’s climate and clean energy program.

The prime climate culprit in concrete is cement, the gluey mixture that binds crushed stone together into a rock-hard substance. Cement production releases carbon in two ways: from the chemical reaction that results when calcium carbonate is broken down, and from the enormous heat levels that must be reached.

So far there’s no announced plan from the Biden administration to require green concrete in return for U.S. infrastructure dollars. The White House didn’t respond to questions about whether it would take steps to mandate or incentivize low-carbon building materials. 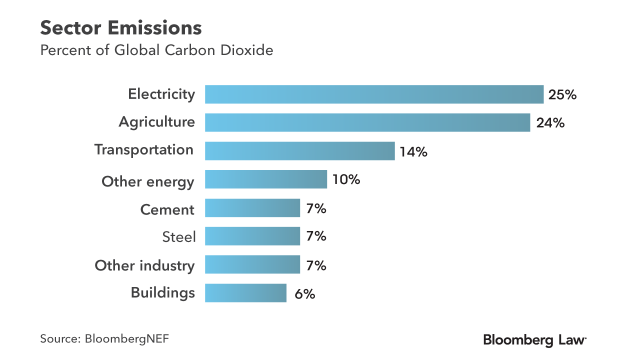 Part of the problem could be availability. The green cement industry is still in its infancy, and there’s no formal market for it, said Julia Attwood, lead analyst for sustainable materials at BloombergNEF.

Users who want it—and are willing to pay a premium for it—must partner with a large cement producer.

And the most expensive green cements, which abate the greatest portion of greenhouse gas emissions, can be twice the price of conventional cement, Attwood said.

At this point, a mandate requiring all new cement to be green could be “enormously disruptive” depending on how “green” is defined, said Attwood.

“If it simply means a bit more sustainable than traditional cement and concrete, that could be done relatively quickly and easily by using recycled inputs,” she said. “If green means net zero, then huge amounts of carbon capture or carbon offsets would need to be deployed to achieve it.”

But Nathanael Greene, senior renewable energy policy analyst at NRDC, said projects could be planned now with the expectation that the market will grow and green concrete prices will drop.

“Some of the newer technologies, like carbon mineralization and novel cements, do come with a premium, but that is more of a reflection of their early stage and scale,” he said. “As they scale and become more common, prices will decline.”

If the cement industry was a country, it would be the third-highest emitter in the world after China and the U.S., according to the Yale School of the Environment.

Because cement production is implicated in most of the greenhouse gas emissions in concrete, the green concrete industry broadly speaking finds ways to use low- or zero-emitting cement substitutes to bind together the loose aggregate. Many green concrete companies have sprouted up in recent years, each with their own proprietary approach.

In a fact sheet accompanying the infrastructure proposal, the White House said Biden’s plan would establish 10 pilot projects to demonstrate carbon capture retrofits for large cement, steel, and chemical production facilities. It also said “his investments will use more sustainable and innovative materials, including cleaner steel and cement.”

A separate statement mentioned the need to use carbon capture technology and green hydrogen to reduce cement-making’s carbon footprint.

They’re important steps to lay the groundwork for research and development on emission-cutting technologies that face “unique risks and financial hurdles,” said Stashwick.

But Robertson, who now works in the industry, said they’re not enough.

“It’s critical that governments at all levels start regulating the embodied carbon in building materials so that reductions are the norm,” said Robertson, now executive vice president of strategy and partnerships at Nexii Building Solutions, a technology company specializing in green construction. “There will be big infrastructure and stimulus funding, and it should come with clear regulations to reduce the climate impacts of that infrastructure.”

Congress has also made some gestures toward green concrete, but with few results.

Last year, Rep. Peter DeFazio (D-Ore.) introduced a $500 billion surface transportation reauthorization bill that would have created a program to fund green construction materials and building practices. The measure was later included in the Moving Forward Act, which passed the House but wasn’t taken up in the Senate.

DeFazio plans to introduce similar provisions this year, said an aide with the House Committee on Transportation and Infrastructure, which DeFazio chairs.

He’ll also push to include language in a surface transportation bill “encouraging the development and deployment of green construction materials and practices to create smarter, more efficient transportation systems, while creating millions of jobs at the same time,” the aide said.

‘Leadership at the State Level’

Some states are taking the lead in the absence of federal leadership.

Kaminsky introduced a bill in the New York legislature that would establish guidelines requiring the procurement of low-carbon concrete for state projects and set up a stakeholder advisory group to consider how to create incentives for green concrete production. An earlier version of the bill would have given a bidding advantage to companies that use low-carbon concrete and provided tax credits to those that document the embodied carbon emissions in their concrete.

Those kinds of innovative measures are still on the table for the stakeholder advisory group, said Stashwick. The bill has cleared the committee stage and is expected to be taken up for a full Senate floor vote shortly.

Big players in the state’s construction industry are already switching to green concrete, including LafargeHolcim, the biggest concrete maker in the world, which is evaluating the equipment at its plant in Ravena, N.Y., and designing a system that can produce low-carbon cement, Kaminsky said.

“You gain synergies when you act regionally,” he said. “It’s very rare to have cement producers who only sell cement to one state. Once New York has cracked the code for this, other states will want to. Once it’s there and available, why would you not try to help the earth?”

New York ranked eighth in the nation in cement consumption in 2020, according to the Portland Cement Association, a concrete trade group. 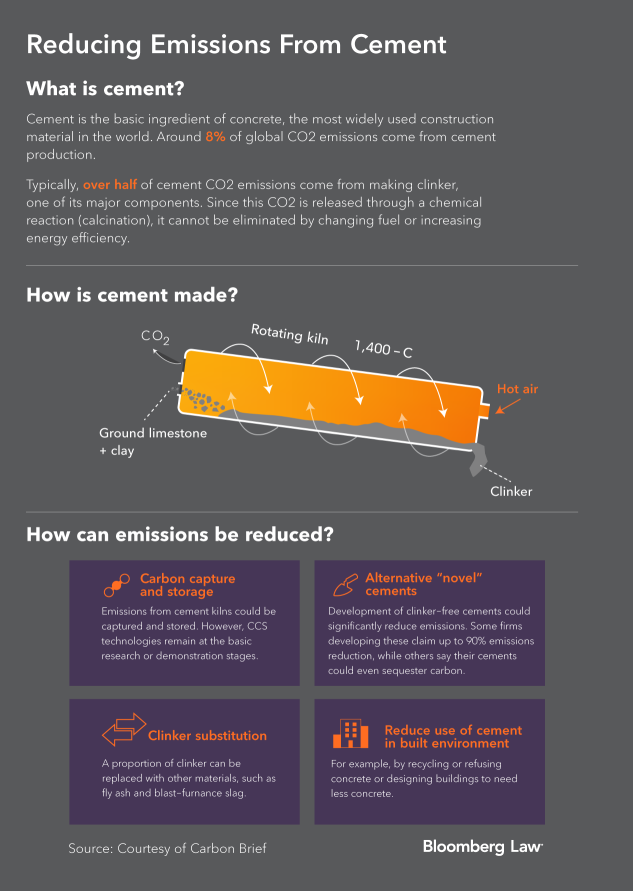 In New Jersey, the state Senate passed a bill in March that would provide tax incentives to builders that use low-carbon concrete. It would also require builders to offer concrete products that use “carbon footprint-reducing technology” as an option in new construction. A companion version is ready for a floor vote in the state assembly.

California lawmakers, too, are working on a bill that would require the California Air Resources Board to come up with a strategy to cut greenhouse gases from the cement and concrete industries by 40% by 2030, and to reach carbon neutrality no later than 2045. The Senate passed the bill on Monday.

“I do think you see leadership at the state level,” said Sean Monkman, chair of the sustainability committee at the American Concrete Institute and senior vice president of technology development at CarbonCure Technologies Inc.

“It’s just a matter of the U.S. having 50 different ideas of how to do something,” Monkman said. “If you have federal leadership, it can align some of these efforts and incentivize action where it might not be a priority.”

CarbonCure has developed a way of making concrete mixes out of captured carbon dioxide; the company recently won an XPrize for its technology.

Similarly, Nexii has developed a proprietary cement and concrete alternative called Nexiite, which the company claims has a lower carbon footprint than traditional concrete and also lowers the amount of building components needed.

Federal legislation or regulation that incentivizes the use of green building materials will be critical to its widespread adoption, said Katie Bailey, Biomason’s brand communications manager.

“Stronger regulation or a stronger stance on pushing us into the future is a benefit to everyone,” Bailey said. “It’s going to free up more funding for organizations like ours to really disrupt these industries that have been the same for a long time. And one of the only ways to do that is through incentives.”