A tidal wetland restoration site is seen at the former location of industrial salt ponds in this aerial photograph above Redwood City, Calif., in 2019.
Photographer: Sam Hall/Bloomberg

Coal miners, stone quarrying companies, and other businesses are rushing to lock down any exemptions to federal water jurisdiction for at least five years, under changes the Trump administration recently made to the nation’s water rule.

Interviews and a Bloomberg Law analysis of agency data show the Army Corps of Engineers is making regulatory decisions, called jurisdictional determinations, with ease and speed since the Navigable Waters Protection Rule (RIN: 2040-AF75) took effect June 22 all across the country, save Colorado where a federal court stayed it.

A decision that might in some instances have taken multiple site visits and nearly three years now can come as quickly as a day, the data show.

Companies want jurisdictional determinations, which are valid for five years, so they can move forward knowing if, when, and where the Clean Water Act applies to water bodies and wetlands on their properties, said Neal McAliley, an attorney with the Miami office of Carlton Fields P.A.

“This is important with the upcoming presidential election, because recent administrations have flip-flopped on the scope of the Clean Water Act compared to their predecessor administrations,” McAliley said in an interview.

The revised rule for the waters of the U.S, or WOTUS, narrowed the scope of Clean Water Act protections by limiting federal jurisdiction to waters that flow year-round or intermittently, and to wetlands adjacent to such waters.

It excludes ephemeral streams, or streams that flow only when it rains or snow melts, and wetlands isolated from flowing bodies of federally protected rivers, wetlands and streams.

The Environmental Protection Agency and the Corps say the rule, which they jointly wrote, makes it easier for companies to know when they’ll need a Clean Water Act permit. But their new definition has prompted multiple legal challenges from environmental groups, Democratic-leaning states, and others. 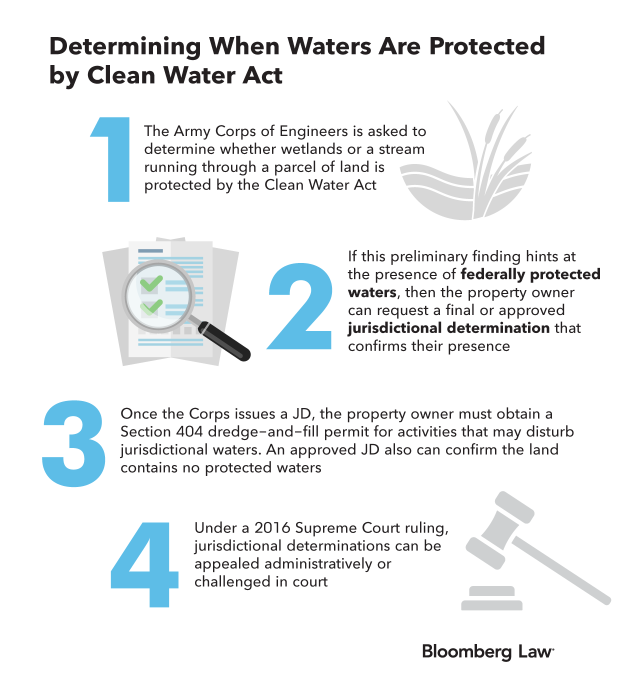 Property owners, developers, and miners typically ask for Corps determinations to see if they need a Clean Water Act Section 404 permit to dredge and fill wetlands and streams found on their land in order to build a home or a road, excavate for a pipeline, or sink a mine.

Dredging wetlands removes vegetation that takes away its ability to filter pollutants and prevent floods. And filling streams with eroded material from other wetlands or soil causes harm to aquatic life.

McAliley sees the rush to secure determinations as a “regulatory insurance” against any potential policy changes in a new administration. Companies are essentially “hedging against risk of uncertainty,” he said.

Since the revised rule came out, the Corps has exempted a vast majority of water bodies from federal regulation.

Out of the 1,085 determinations issued since June 22, the day the revised water rule took effect, 758 were based on no jurisdiction, meaning the waters in question were found not to be under federal protection. The Corps found 189 cases where federal jurisdiction applied in full, and another 138 applied in part.

For example, the Corps said it had no jurisdiction over 2,683 linear feet of ephemeral streams—seven and a half times the length of an average football field—that would be affected by Tri-Star Mine’s rock quarry project in eastern Oklahoma.

In another case, the Corps found that a Consol Energy Inc. a coal mine in Itmann, W.Va, would affect Still Run, a tributary of the Guyandotte River that falls under federal jurisdiction. But 651 linear feet of ephemeral streams that feed into Still Run—and could also be affected by dredging and filling—wouldn’t fall under federal protection.

“It is confirming that streams and wetlands that were protected under the Obama rule, and even before that, are no longer protected, which is what scientists and environmental advocates feared would happen,” said Ellen Gilinsky, who served as the EPA’s associate deputy administrator for water under the Obama administration.

Stepping Up the Pace

The Corps data shows that it’s finding it easier to determine which waters are jurisdictional.

More than half of the 1,921 determinations the Corps has made from Jan. 1 to Aug. 27— 56%—were issued since June 22, the day the rule took effect, according to Corps data. Those determinations involved water bodies and wetlands subject to protections under the Clean Water Act or the Rivers and Harbors Act of 1899.

“There is a huge incentive to lock in a JD now under the Trump rule because it is good for five years under the Corps rules,” Vermont Law School Professor Patrick Parenteau said. He said the U.S. Supreme Court in Army Corps of Engineers v. Hawkes Co. affirmed the five-year timeline in 2016 as it ruled that these findings could be challenged in court.

Nearly 200 of the Corps’ approved requests were made on the day the rule took effect, and another 100 were made in the week following. The Corps data only shows the applications that the agency acted on, so more applications were probably submitted, McAliley and Parenteau said.

David Fotouhi, the EPA’s principal deputy general counsel who is charged with overseeing the agency’s Clean Water Act programs, said at an August webinar that the Corps has issued at least 700 such jurisdictional findings since the new rule took effect, and he expects that number to grow.

Fotouhi said the EPA and the Corps have issued a series of memos to implement the new WOTUS definition, including one that instructs both agencies on how to apply this rule consistently.

Corps data also shows that twice as many of its decisions since June 22 were made in the office instead of on field visits. Since the new rule came out, the Corps spent as long as 59 days to issue a finding—compared to a maximum of 976 days to issue a jurisdictional determination a year ago.

Gone is the often time-consuming, case-by-case analysis required under the Obama administration’s 2015 Clean Water Rule for certain types of streams and wetlands, and under the agencies’ 2008 guidance interpreting the Supreme Court’s fractured 2006 ruling in Rapanos v. United States. Both entailed the Corps conducting field visits to pin down whether a wetland or ephemeral stream has a significant hydrological nexus, or connection, to large regulated navigable bodies of water.

“It appears it is easier for the Corps to find exclusions for ephemeral waters and isolated waters and wetlands under the Navigable Waters Protection Rule” than under the 2008 Rapanos guidance, said Larry Liebesman, a former Justice Department environmental lawyer who is now a senior adviser at the environmental and water permitting firm of Dawson & Associates.

Since the new rule took effect, the data shows that more than one-third of the findings were based on the Corps staff using Geological Survey wetlands maps and satellite images, rainfall records, and topography, instead of relying on field visits.

The Corps said that its staff, like most of the country, has been affected by the coronavirus pandemic that has kept many people working remotely.

Some lawyers and others say the Corps is now in a better position to make quick decisions because the rule has clearly demarcated jurisdiction, and because applicants are better prepared.

“This new rule is going to help protect water quality because it provides clarity and quick answers. The JDs issued under this new rule will pave the way for getting critical projects off the ground,” Waters Advocacy Coalition spokesman Don Parrish said. The coalition represents entities that lobbied against the 2015 Obama-era water rule. Parrish is also a senior director for regulatory relations at the American Farm Bureau Federation, which is part of the coalition.

But Gilinsky, who now runs a water policy consultancy, said desktop surveys are much less accurate and can often miss wetlands and streams that are apparent during a site visit. Moreover, the quick turnaround times means less analysis of the water bodies and wetlands, and of their functions, such as filtering pollutants, resulting in less environmental protection, she said.

But what surprised Gilinsky most was the Corps turning around findings in a single day.

“I have never seen that happen under previous administrations,” she said.

To contact the reporter on this story: in Washington at asaiyid@bloombergindustry.com