An Imperial Valley sprinkler system sprays crops with water from an irrigation canal in an agricultural area that traditionally uses water from the Colorado River.
Photographer: Brent Stirton/Getty Images

Water suppliers along the drought-stricken Colorado River hope to tackle another tricky issue after the U.S. Bureau of Reclamation installs a new leader: salty water.

The river provides water for 40 million people from Colorado to California, and helps irrigate 5.5 million acres of farm and ranchland in the U.S. But all that water also comes with 9 million tons of salt that flow through the system as it heads to Mexico, both due to natural occurrence and runoff, mostly from agriculture. Salt can hurt crop production, corrode drinking water pipes, and cause other damage.

Various efforts along the river or tributaries annually remove about 1.2 million tons of salt. But the largest brine-removal system in the basin has been shuttered for two years over earthquake concerns. In December, President Donald Trump’s outgoing administration released a final environmental review on what to do about it.

The chosen course: No action, leaving the fate of the project and of salt removal murky. Now local suppliers say they will be pressing the Biden administration to do the opposite.

“For the last two years the salt has been flowing back into the river,” said Bill Hasencamp, chair of the Colorado River Basin Salinity Control Forum, which represents all of the states that draw from the river. “We were very disappointed. There’s no plan to capture [it] going forward.”

Water suppliers have filed comment letters about the “no action” decision and sent letters to former Reclamation Commissioner Brenda Burman. The average annual economic loss from salinity levels in the Colorado River is estimated to be $495 million, Reclamation said in its environmental review.

At issue is the Paradox Valley Unit near the Colorado-Utah border. The project, in operation since 1996, took saline groundwater before it could hit the Colorado and the Dolores River, a tributary, and injected it more than three miles beneath the surface into a well disconnected from the river system. About 95,000 tons of salt were removed each year.

But injecting, like hydraulic fracturing, can cause seismic shifts.

Reclamation shut down Paradox Valley in March 2019 after a magnitude 4.1 earthquake, which the U.S. Geological Survey considers moderate in size. Operations resumed for a six-week test at reduced use in spring 2020, but the well currently isn’t operating.

Technical experts are evaluating next steps and it’s too soon for the agency to propose a new salinity control plan, Reclamation spokeswoman Linda Friar said in an email. 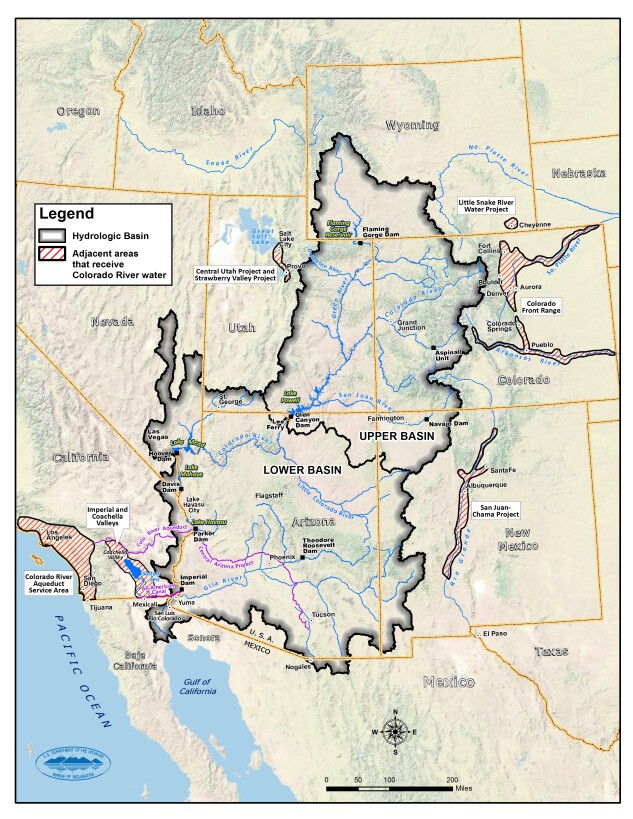 The agency currently doesn’t plan to issue a record of decision, which would finalize the “no action” plan Reclamation selected, she said.

Hasencamp, also manager of Colorado River resources for the Metropolitan Water District of Southern California, and others had pushed for that delay in comments filed with Reclamation earlier this month.

“I think this is going to be one of the first things the basin states is going to want to sit down about with the new commissioner,” said Chris Harris, executive director of the Colorado River Board of California during a recent meeting. “I would just hate to see us taking a step back.”

President Joe Biden has nominated New Mexico Rep. Deb Haaland as Interior Secretary and Tanya Trujillo, an expert on water law and the Colorado River, as principal deputy assistant secretary for water and science. A Reclamation commissioner hasn’t been named yet.

“We want to keep the door open for other options” beyond the “no action” alternative, Hasencamp said. “The hope is the new administration understands the importance of salt control.”

In its environmental review, Reclamation considered and rejected building a new injection well, using evaporation ponds for brine to be treated at the surface, and building a discharge facility to evaporate and condense water before sending salt to a landfill.

The “no action” alternative was “in the best interest of public health and safety,” Ed Warner, Reclamation’s Western Colorado Area office manager, said in a news release.

James Eklund, former director of the Colorado Water Conservation Board, said when he served as the state’s representative on salinity control programs, he was “pretty adamant” that the bureau should switch from earthquake-causing deep injection wells to evaporating ponds in order to deal with the saltwater. Eklund is now at Denver-based Eklund Hanlon LLC.

“Oklahoma knows what can happen under that approach,” he said, citing earthquakes in the state caused by fluid waste from oil and gas production being injected deep underground.

Reclamation said in the review that without the Paradox Valley treatment, it would still be in compliance with the federal Colorado River Basin Salinity Control Act, which authorizes treatment projects to control water quality. It also announced on Jan. 19 plans to spend $1.2 million for eight desalination research projects in California, New Mexico, and Texas.

But more than 600 miles south, the loss of Paradox Valley could increase salinity levels at Imperial Dam by 9 to 10 parts per million, which could lead to $23 million in estimated economic losses each year, Harris, from the Colorado River Board of California, said in a December letter to Burman, a Trump appointee no longer in office.

The EPA doesn’t have a drinking water standard for sodium chloride, but it has a voluntary standard of 250 parts per million for chloride, a component of salt. Voluntary standards are generally related more to aesthetic concerns like taste and appearance.

“It’s not huge, but we get essentially a ton of salt in every acre-foot of water,” said Tina Shields, water manager for Imperial Irrigation District, which borders Mexico. “If you don’t continue to implement these upstream salinity control measures by default, it can only go up.”

Nearly all farmers in the Imperial Irrigation District have drains installed beneath the surface to leach salt away from crops, which requires even more water. But that’s not a permanent solution.

Imperial is the last stop for water before it gets into Mexico, where the Colorado River delivers water to 2.3 million people and 500,000 acres of agriculture.

“I don’t think any water district along the Colorado River would support the ‘no action’ alternative,” Shields said.

Urban areas will be able to weather the salt problem better than agricultural ones because they have mass treatment to comply with drinking water standards, said Patricia Mulroy, former general manager of the Southern Nevada Water Authority and owner of the consulting firm Sustainable Strategies.

Mulroy is more concerned about the Colorado River system’s current 20-year drought, and what it means for future operations. Reclamation forecasts show this could be one of the region’s driest years. Drought contingency plans adopted in 2019 call for reductions when Lakes Mead and Powell fall below certain levels. Mandatory water for this year have already been triggered for Arizona, Nevada, and Mexico.

But that lack of water also affects water quality.

“When you have that much less water and all the salt coming in, it’s going to have even a bigger impact,” Hasencamp said. “Long-term, it’s a big deal if groundwater basins salt up.”

—With assistance from Tripp Baltz.