The White House has taken the first steps to grapple with the massive issue of climate migration, as drought, storms, and rising seas displace millions of people worldwide.

The Biden administration plans to release a report in August on the impacts of climate change on forced migration, mandated by an executive order. Migration advocates, who have long called for safeguards that address displacement from global warming impacts, have welcomed the progress.

But there’s a lack of U.S. policy to protect climate-displaced people, one of a host of challenges in developing safeguards for people migrating from disasters abroad.

One of its most difficult tasks, experts say, is defining the problem. No legal safeguards exist specifically for people who claim they were forced to leave their country because of climate change.

“Can we point to someone and say, ‘You’re a climate migrant?’ I think it’s still somewhat of an open question, whether that’s possible,” said Alex de Sherbinin, senior research scientist at Columbia University’s Center for International Earth Science Information Network.

And without a solid legal definition for what a ‘climate migrant’ is—the precursor to protections under refugee law—changing U.S. immigration policy could a tough sell.

The Biden administration is already facing heat from both Republicans and Democrats over current attempts to adjust immigration policy gutted by the Trump administration. The president just agreed to raise refugee admittance numbers from historic lows last month.

Some immigration scholars and advocates point to state and city responses, temporary status protections, and regional cooperation with neighboring countries as potential solutions outside of a legal shift. 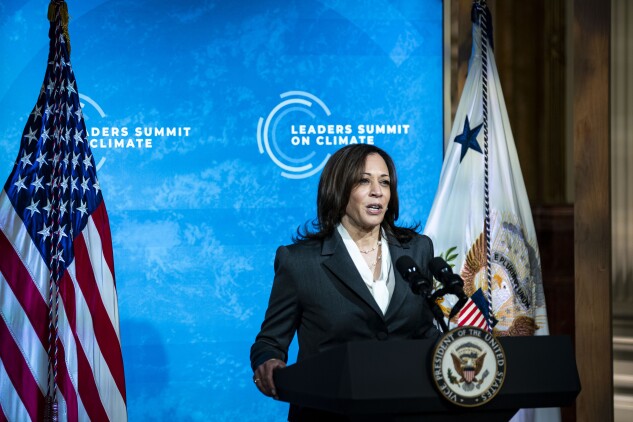 Vice President Kamala Harris speaks during a virtual Leaders Summit on Climate with 40 world leaders at the East Room of the White House April 22, 2021.
(Photo by Al Drago-Pool/Getty Images)

The State Department is working with several agencies on a related report from Biden’s executive order to better understand climate and migration connections and “identify available tools to address these complex challenges,” a spokesperson said in an email.

Vice President Kamala Harris recently noted that catastrophes such as droughts and hurricanes are pushing people out of their homes, and “the lack of climate adaptation and climate resilience” are root causes of migration.

Millions of people are directly displaced by extreme weather, which ever-increasing research says is only getting worse. The United Nations estimates that around 20 million people migrate within their own countries per year due to natural disasters and storms. Others choose to leave, such as the thousands of Hondurans moving to the southern U.S. border after dual hurricanes devastated the country last year, according to Customs and Border Protection data.

While climate change is driving migration, the world isn’t at yet at a crisis point that would spur widespread political action, Kamal Amakrane, veteran senior UN official who led efforts behind the UN Global Compact for Migration, told Bloomberg Law.

“This human dimension of the climate crisis has yet to fully capture the international community’s attention,” said Amakrane, who is an adjunct professor of international affairs at Columbia University.

This opens the door for the U.S. to take up a position of leadership on the issue—which Amakrane believes should be treated as one way to adapt to a changing climate.

“A persistent issue undermining efforts to address the climate change-migration nexus has been the absence of global champions, appropriate protection mechanisms, and dedicated financial resources,” he said.

The lift may be especially heavy for a U.S. immigration system that has long chosen border surveillance and humanitarian responses over opening up immigration pathways, said David Wrathall, an assistant professor at Oregon State University. People displaced by climate impacts likely won’t be “regularized” into an official, prescribed system, he predicted.

“It just doesn’t seem to me like the response to climate change and migration is going to be opening up various visa categories, until we have a generational turnover, until politics transforms a bit,” Wrathall said.

Many climate and immigration advocates think U.S. immigration law should be widened to include official protection for migrants displaced by disasters, either through legislation or using the Temporary Protected Status program.

Current U.S. refugee law stems from the United Nations’ 1951 Refugee Convention and its 1967 Protocol, which mandates that refugees must prove they’re fleeing persecution on the basis of their race, religion, nationality, political opinion affiliation, or membership in a particular social group. This remains the definition under U.S. refugee law.

The U.N. Human Rights Committee has affirmed the influence of climate change on displacement, even though the U.N. hasn’t officially changed the definition for refugee status in the official Convention—which could trigger new, binding requirements.

That bill, a version of which Harris supported during her Senate tenure, “would commit the U.S. to admitting thousands of climate migrants a year if passed,” Francis said in an email. 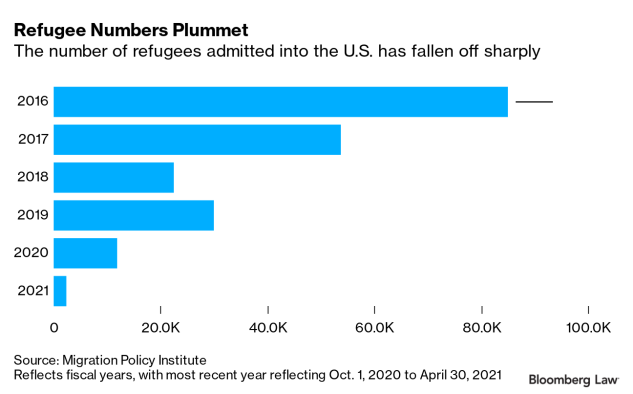 “To create this new category of climate refugees is a transparent attempt to use the climate issue as a crowbar to pry open the borders of the U.S,” said Mark Krikorian, executive director of the low-immigration think tank, Center for Immigration Studies.

Krikorian also disputed the argument that the U.S. owes a moral responsibility to citizens of countries overwhelmed by climate change because of its history of high carbon emissions.

“That’s not a basis for immigration policy. And even if that were a legitimate argument, that might be an argument for helping people adapt to climate change—not for having them move to Cincinnati.”

Arguing that the U.S. shouldn’t open up protections because it already lets in too many migrants is false, said Francis, adding that refugee admittance numbers are at a historic low, despite Biden’s signaling that he’d increase them.

Biden agreed this month to bump the Trump administration’s 15,000 refugee limit to 62,500 refugees by fall. Biden admitted that he likely won’t reach that ceiling—set annually by the president—by the end of this fiscal year due to the stringency of the previous administration’s limit, which dropped refugee admittance numbers to their lowest since 1980.

On a local level, U.S. cities and states can activate solutions that offer safeguards for migrants displaced by climate impacts. Last month, a coalition of more than a dozen U.S. mayors from major cities called on Biden to “actively engage” with mayors as agencies craft their climate migration report.

“We stand ready to contribute to the development of safe and regular pathways to address climate-related movements, including through the revitalization of the U.S. refugee resettlement program and through building communities that welcome all newcomers with easy access to services and support, regardless of immigration status,” the mayors wrote.

The U.S. could benefit from job creation fueled by incoming migrants—especially while employment rebounds after the pandemic, Francis said. “As long as workers’ rights are protected, immigration can provide economic benefits for both receiving countries and immigrants and migrants,” they added.

Local solutions should be cogs in a bigger machine of regional cooperation to address displacement, which includes private sponsorship efforts and giving people the opportunity to migrate temporarily and contribute to local economies—another incentive for local leaders, Amakrane said.

“It takes more than one hand to clap,” he said. “It is a shared responsibility that requires the responsible engagement of all concerned countries and strong cooperation.”