Judges have issued momentous decisions in climate-focused lawsuits in recent months, but state and local governments have a long way to go in their efforts to hold BP Plc, Exxon Mobil Corp., and others liable for the impacts of global temperature rise.

A federal appeals court last week delivered two key procedural wins for California cities and counties, allowing them to advance claims against Big Oil for its role in climate change. A court across the country cleared the path for a similar case from the city of Baltimore earlier this year.

The lawsuits are part of a nationwide campaign by state and local governments to tap oil company coffers to deal with impacts like floods, sea-level rise, and damage to roads and stormwater infrastructure. Fossil fuel use is the primary driver of climate change.

The diverse set of cases started years ago, and some are finally moving ahead in local courts. The Ninth Circuit rulings were crucial to plaintiffs, but lawyers and scholars say the biggest legal tests are still to come.

“This is definitely a big win for the localities who have brought these suits,” said Karen Sokol, an environmental law and torts professor at Loyola University in New Orleans. “But they still face significant hurdles just on the merits of the state law claims.”

Oil companies have already asked the U.S. Supreme Court to stop the cases in their tracks.

After an appeals court in March allowed Baltimore to pursue its climate claims in Maryland state court, energy industry lawyers asked the nation’s highest court to intervene. The petition is still pending. 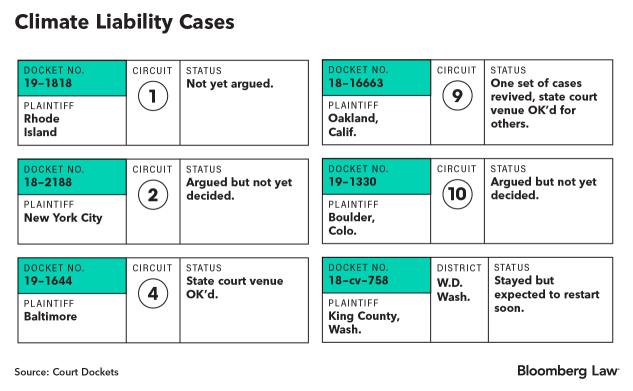 The defendants haven’t said whether they plan to take the same route to challenge the recent California rulings. Chevron Corp. spokesman Sean Comey said the company is “evaluating our options.”

Phil Goldberg, special counsel to the industry-aligned Manufacturers’ Accountability Project, maintained that the Supreme Court should take the opportunity to resolve the legal questions before all sides sink more resources into litigation.

But the justices rebuffed previous industry pleas to halt climate cases in earlier stages, and they’re unlikely to have a change of heart this time around, Case Western Reserve University law professor Jonathan H. Adler said.

He noted that the Ninth Circuit rulings focused on narrow procedural questions and came from a unanimous, conservative-leaning panel: two judges appointed by Republican presidents and one appointed by a Democrat.

“It would be different if you had a very liberal Ninth Circuit panel,” Adler said. “We’ve seen the Ninth Circuit get slapped around for that. This isn’t that.”

One of last week’s dual opinions from the U.S. Court of Appeals for the Ninth Circuit revived claims from San Francisco and Oakland that a federal district court had previously scrapped.

U.S. District Judge William Alsup agreed with industry lawyers that the cities’ allegations that oil companies created a public nuisance under California law by producing and marketing fossil fuels actually fell under federal common law, and were beyond the court’s jurisdiction.

The Ninth Circuit rejected the conclusion. But oil companies have additional arguments for keeping the climate cases out of state court, and the litigation now goes back to the federal district court for further proceedings.

A separate set of cases from San Mateo County, Imperial Beach, and other local governments is poised for local court action after the Ninth Circuit affirmed a different district judge’s decision to send the litigation to California courts.

“The plaintiffs will still face a bunch of problems,” University of California, Berkeley, law professor Daniel Farber said, noting that California courts must decide whether the cities and counties have brought valid claims under state law.

A case from Washington state’s King County, which includes Seattle, is expected to see new life in federal district court this summer because of the Ninth Circuit ruling.

The county filed suit against BP and other companies in 2018, but the parties put the litigation on hold pending the outcome in the Oakland appeal at the Ninth Circuit.

The two sides must notify the district court of the outcome of the appeal after the oil companies have a chance to seek rehearing from the circuit court.

Maryland’s biggest city, meanwhile, is charging ahead with its climate liability lawsuit in local court.

The U.S. Court of Appeals for the Fourth Circuit in March rebuffed industry efforts to keep it in federal jurisdiction, and the parties are now moving through the discovery process in state court.

But oil companies are hoping for relief from the Supreme Court. They asked the justices to review the Fourth Circuit’s decision, and Baltimore lawyers have until June 29 to respond.

In Colorado, local and federal proceedings are happening at the same time.

Boulder, Boulder County, and San Miguel County are facing off with Suncor Energy, Exxon, and others in state court, while the U.S. Court of Appeals for the Tenth Circuit considers the debate over whether state or federal review is appropriate. The appeals court heard oral arguments in May.

A case from Rhode Island, the only state to file climate liability claims so far, is in a situation similar to Boulder’s.

A state court is moving the litigation through its early stages as the U.S. Court of Appeals for the First Circuit considers the industry’s claims that the state-level venue is inappropriate. The First Circuit hasn’t yet scheduled oral arguments.

The U.S. Court of Appeals for the Second Circuit, meanwhile, is deciding whether to revive New York City’s efforts to make fossil fuel companies cover the local costs of dealing with climate change.

Unlike the other local government plaintiffs, the city filed its initial complaint in federal district court, so the sides aren’t arguing over state-versus-federal venue. Instead, they’re dealing with a core legal question: whether the Clean Air Act displaces climate-related tort claims.

The latest local government to sue the energy industry over its role in climate change is Honolulu. The Hawaii capital launched its suit earlier this year in state court. Defendants Sunoco LP and others transferred it to federal district court.

The U.S. District Court for the District of Hawaii paused the case pending the outcome of the Ninth Circuit appeals, and Honolulu is now expected to ask the court to restart the proceedings.