An abandoned pomegranate orchard during a drought in Firebaugh, Calif., in July 2021.
Photographer: David Paul Morris/Bloomberg

Legislation that aims to boost climate-friendly farming practices is getting bogged down amid opposition in the House and questions over how the Agriculture Department would carry out its mandates.

The measure (), which would reward agricultural practices that sequester carbon, breezed to passage in the Senate in June on a 92-8 vote, with 54 cosponsors split almost evenly between Republicans and Democrats. Supporters—including agriculture and environmental groups—billed it as a way to help farmers’ bottom lines while cutting greenhouse gas emissions from agriculture, which contributes 10% of U.S. emissions, the Environmental Protection Agency reports.

But the Growing Climate Solutions Act has stalled in the House, with Republicans in the chamber recoiling at the idea of federal intervention in carbon markets, while progressive Democrats fret over a boon for big industrial operations.

House Agriculture Committee Chair (D-Ga.) isn’t cosponsoring the chamber’s related version (). There’s no definite timeline for when his panel will take up the bill, a House committee spokesperson said. 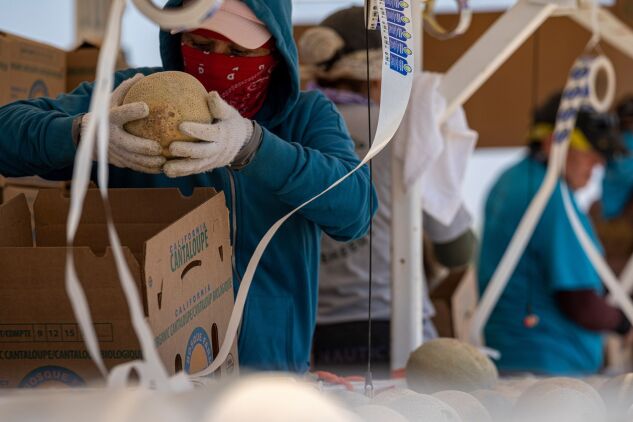 Workers package cantaloupe on a farm during a drought in Firebaugh, Calif., in July 2021.
Photographer: David Paul Morris/Bloomberg

Some environmental groups are concerned that the USDA, which would oversee the carbon credit effort, lacks the expertise of the EPA and other federal agencies in verifying practices that cut emissions. The bill is also struggling to get attention in the House, which has to sort out two massive infrastructure measures and faces a time crunch on big must-pass items including raising the debt ceiling and passing fiscal 2022 spending bills.

“Addressing the climate crisis is one of the most urgent challenges we face, and our farmers and foresters are an important part of the solution,” said Senate Agriculture, Nutrition, and Forestry Committee Chair (D-Mich.), one of the bill’s sponsors, calling it “a win-win for farmers, our economy, and for our environment.”

The legislation is one of the most promising climate measures in Congress. The stalemate highlights the challenges of moving modest climate bills with bipartisan backing, even as President Joe Biden has pushed to address the climate crisis as one of his top priorities.

An Intergovernmental Panel on Climate Change report this week spelled out an undeniably hotter future for humans in the next few decades — and immediate action needed to prevent the worst outcomes. Agricultural practices, along with deforestation and fossil fuel combustion, release greenhouse gases, and are listed among the top human causes of climate change in the report.

The bill garnered high-profile supporters in the Senate, including bill author (R-Ind.), who co-chairs a bipartisan climate caucus.

But when the House returns from recess later this month, the Senate-passed infrastructure package and budget resolution will likely rank among the Democratic majority’s immediate priorities. And getting anything close to the bill’s Republican support in the Senate will be tough in the House, where lawmakers are more skeptical of new government programs and any whiff of bureaucracy.

The Agriculture Committee’s top Republican, (Pa.), panned the legislation after it passed the Senate in June as “a big-government solution in search of a problem,” with the government intruding into voluntary carbon markets. The House’s related bill was introduced in April by Reps. (D-Va.) and (R-Neb.).

Thompson urged Scott to give the agriculture panel substantial time to review the measure.

“Not only does it need significantly more vetting before consideration on the House floor, but our Members deserve a fulsome understanding of environmental service markets by way of education,” the Pennsylvania Republican wrote in a letter last month.

But House GOP backing may be needed to offset what has been lukewarm support from progressive Democrats skeptical of a measure that could benefit growers, including big agricultural companies, while leaving lingering questions over what emissions cuts might be achieved.

While some environmental groups back the legislation, others—including Friends of the Earth and Greenpeace—don’t.

They cite concerns that power plants and refineries could purchase the credits from growers in lieu of actually reducing emissions. They also worry about potential conflicts of interest for third-party auditors which the USDA would use to verify the agricultural emissions cuts.

The legislation would encourage farmers, ranchers, and foresters to participate in carbon credit-trading markets. USDA would provide the stamp of approval for outside verifiers who would help landowners adopt voluntary practices—such as reduced tilling, which leaves the carbon sealed in surface layers of soil undisturbed—allowing them to earn carbon credits to be sold in carbon markets.

It also would create an online resource farmers could use to connect with experts, and would establish an advisory council to guide USDA in standing up the program.

Marcia DeLonge, a senior scientist in the Union of Concerned Scientists’ Food & Environment Program, said focusing too much on sequestering carbon in soil—measuring whether net greenhouse gas emissions for an operation go up or down—doesn’t take into account other environmental impacts worsened by climate change, such as water quality and biodiversity.

Other scientists say there are questions over how to verify whether carbon reductions go beyond “business as usual” and wouldn’t have happened without the credits, how to guarantee the carbon sequestered in soil stays there, and how on-the-ground climate-friendly practices address a global problem of rising temperatures.

While the Agriculture Department doesn’t have a lot of experience related to the proposed program, “I don’t think anybody else in government does, either,” said former Secretary , who served under the Clinton administration. “This is almost something that cries out for a public-private partnership.”

Joe Glauber, a former Agriculture Department chief economist, also said the USDA could handle the program, but would need to start with a pilot first to properly build up regulations and procedures over time.

“The technical issues are enormous, and that’s what really needs to be worked on,” said Glauber, now a senior research fellow at the International Food Policy Research Institute.