This is a story about a shipwreck, an ocean, bottles of century-old champagne, a registered U.S. Patent, Tommy Lee of Mötley Crüe, and California’s storied wine history.

It begins with a diver, a surfer, a winemaker, and a Frenchman who sunk wine storage cages off the coast of Santa Barbara, California, in attempt to create the world’s first members-only underwater wine cellar and club. Only they did it without state permits, near the site of an enormous offshore oil spill five decades ago. That raised the ire of the California Coastal Commission, which accused the venture of deliberately violating the law and ordered the cages removed.

Then, after winning more time to comply by citing the pandemic, the venture threw a pricey bottle retrieval party and recorded it for social media.

“I think it takes a certain amount of hubris to just do what you want, however you want, wherever you want,” said Jennifer Savage, California policy manager for Surfrider Foundation, a non-profit environmental group. “There’s reasons why people can’t just go out and dump anything they want on the ocean floor.”

The commission is set to vote next month on a request to approve the cages after-the-fact and allow more of the contraptions to be sunk. Its staff has recommended the commission deny the application, saying it doesn’t meet key use criteria to be approved under the Coastal Act, a landmark state law passed in 1976 to protect coastal resources, foster public access, and balance conservation with development.

“Santa Barbara is ocean and wine,” said Azzaretto, who spent years in East Africa developing marine and game parks. “Well, we just married the two things and we’re doing it in a really clean way.”

In 2010 explorers found a shipwreck at the bottom of the Baltic Sea. Divers managed to salvage 168 bottles of champagne that dated back to 1840-1841. The bubbly tasted good, setting off a fledgling industry.

Spain and Italy now have a handful of underwater storage facilities. An underwater vineyard in Croatia boasts wine stored in clay jugs, though attempts to replicate those efforts in the Chesapeake Bay and off the coast of North Carolina have been unsuccessful. An Underwater Wine Congress convened in 2019, and another session is set for Bilboa, Spain, in 2022. The Congress didn’t respond to requests for comment.

In 2015, Azzaretto said, he came up with a special cage with recycled metals that acts like a battery, charging the structure using waves, and stirring the wine all while the bottles are kept in dark, cool conditions needed for storage and preservation. He began experimenting in 2016, first with 12 bottles, then 50. One cage was dropped in 2019 and two in 2020, the state says. He won patent approval in 2020.

To Azzaretto, his venture is like crab fishing—"You drop a cage, you pull it back up"— and aquaculture’s fish breeding—"I’ve got young wine. I make it into older wine.”

Attempts to pull permits for the deployment got lost in a maze of jurisdictions and Covid-19 delays, Azzaretto said. “I didn’t know I was doing anything wrong. I went to every office in the harbor. I told everybody what I was doing.”

Ocean Fathoms says on its website that the venture is a “permitted wine cellar,” which the commission staff says isn’t true. Last week, Azzaretto called the website language a bit ambiguous. “I think we should correct that,” he said.

Ocean Fathoms applied for permits only after it had dropped the cages, and the commission learned about the cages from the Army Corps of Engineers, said Kate Huckelbridge, deputy director of the coastal commission.

“Wine storage does not fit any of those seven defined uses” in the Coastal Act, Huckelbridge said.

“It takes up habitat and space when there are existing creatures there,” she said. “It crushes whatever is underneath it.” 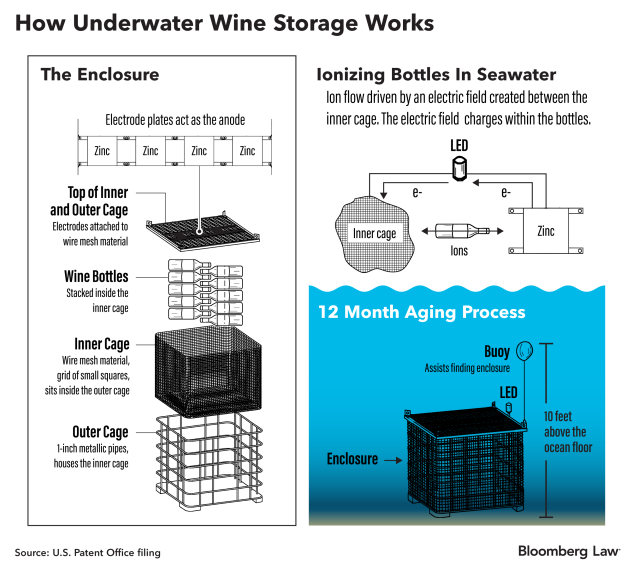 Permit Time and a Party

The state sent a notice of violation to Ocean Fathoms on Feb. 2 and ordered the cages removed by Valentine’s Day.

“It appears that over the last 22 months, you have been placing into offshore waters cages containing bottles of wine for the purpose of aging them, and then removing and replacing the cages,” the letter said. It noted that the project also lacked approvals from the Army Corps, U.S. Fish and Wildlife Service, California State Lands Commission, and Regional Water Quality Control Board.

Ocean Fathoms asked for an extension, citing Covid-19 and planning issues. The state agreed and extended the removal deadline to March 15. As the commission was investigating the violation, Ocean Fathoms submitted a formal application for permits to drop past and future cages.

With the state’s extension in hand, the company and a Beverly Hills wine store hosted a luxury boat trip out to the site on March 13. They ate and drank, watched the cages come up, and picked out a bottle raised from the ocean (valued at $300) for their very own. Tickets online were priced at $1,000.

Further inflaming opponents, the company promoted the fact that each bottle is adorned with whatever sea attached itself to the glass over 12 months.

Azzaretto calls that concern overblown. “Barnacles are seen as a pest,” he said. “I’m the only one that puts the value to the barnacles.”

Ocean Fathoms does have its fans. The Santa Ynez Band of Chumash Indians and Santa Barbara County Supervisor Das Williams urged the commission in letters to approve the permit.

“This project, other than the unique style of making wine, is innovative,” Williams wrote on June 23. “We live in a county that is full of wine ventures but we have not seen anything like this. Allowing this business would further our county, coast, and state’s reputation as a premier wine location in the world.”

Tyler Thomas, president and winemaker for Dierberg Vineyards and Star Lane, said the two family wineries gave roughly 28 cases each of chardonnay and cabernet sauvignon to the venture. They saw it as a low-cost way to experiment with making wine better, and hope to work with Ocean Fathoms in the future, he said.

In side-by-side testing with the underwater bottles and those that stayed on land, Thomas noticed a difference that improved the taste. “The cabernet definitely felt more mature but not in a bad way where it felt like it was anywhere close to being too old,” he said.

As for concerns about the environment? “I think if we genuinely believed it was going to have some kind of harm to the ocean and ocean life we wouldn’t have done it,” he said. “We’re not putting trash in the ocean. We’re just putting bottles of wine.”

“We did make inquires with them and did some sampling, but have not moved forward with sending them any of our wines,” Rick Toyota, The Family Coppola’s vice president, said in an email, declining to comment further.

Ocean Fathoms is an interesting marketing concept, and the underwater aspect could help niche wineries without storage, said Stephan Sommer, director of Fresno State’s Viticulture & Enology Research Center. But the claims of aging are fanciful. Wine needs oxygen to age, and waves don’t have the energy needed to “ionize” the wine, he said.

“It’s a nice tool, but it’s not doing everything to the wine that they claim,” said Sommer, who has been in the industry for more than 20 years. “It sounds more like witchcraft than actual science.”

Azzaretto hopes to make the venture into a viable wine club, where members get selections every three months and bottles are switched out yearly. Bottle prices will range from $350 to $500.

Individual memberships haven’t been sold, but co-founder Todd Hahn said he’s partnering with established wine clubs, though no wine has been delivered. “You’ve got to be invited,” he said. “It’s very small. It’s very exclusive.”

Tommy Lee from Mötley Crüe has sampled a bottle but is not a partner, Azzaretto said.

Meanwhile, the commission board is set to hear the application on Aug. 8. It doesn’t have to follow the staff recommendation to deny the application. And even if it’s a “no” vote, Azzaretto said that’s not the end of the story.

“I have a U.S. patent,” he said. “The coastal commission is only in California. I can do it from Guam to Alaska.”