Attendees take a photo next to a sign of #SR15, or Special Report 15, at a session of the Intergovernmental Panel on Climate Change in Incheon, South Korea, in 2018.
Photographer: Jung Yeon-je /AFP via Getty Images

Scientists and entrepreneurs developing ways to suck carbon pollution from the air see validation in a United Nations’ new climate report, which they hope will lead to greater investor support and more research dollars.

The U.N. Intergovernmental Panel on Climate Change’s special report is the most prominent unequivocal declaration that carbon removal—cleansing the sky of possibly decades worth of fossil fuel pollution and storing it safely forever—will be required to avoid some of the worst consequences of climate change. But scientists are deeply skeptical that it will make much of a difference.

“I’ve never received more than one offer a day. They seem to be in response to the IPCC report,” Chichilnisky said. “It indicates a rapid increase in investor interest. It indicates that people are ready to put money into the pursuit of these policies.”

“What we see now is there’s almost no funding today,” Deich said. “I think the special report confirms a lot of what we already know, which is that carbon removal is essential for actually meeting our climate goals.”

Elephant in the Room

Carbon removal has long been the elephant in the room in countries’ discussions about how to tackle climate change. The technology is unproven to work at a large enough scale to make a difference for global warming, and its costs have never been calculated.

That conclusion comes with a caveat in the report: Though carbon removal is necessary, scientists still understand too little about the complexities of the Earth’s climate to know if cleansing carbon from the atmosphere will cool the globe if people pollute more than is allowable to keep warming within Paris targets. 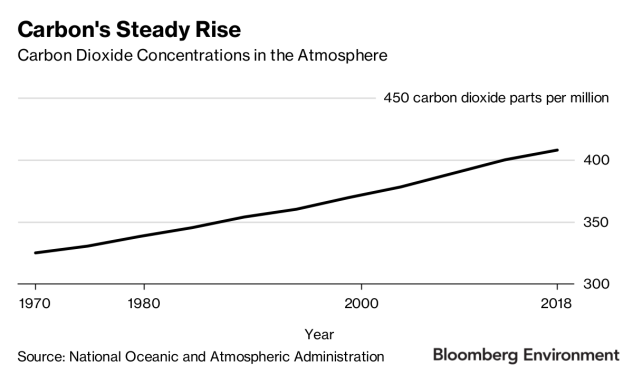 The report says between 100 billion and 1 trillion tons of carbon dioxide must be scrubbed from the atmosphere by the end of the century.

“I find the clarity to be refreshing, but it’s not new news to many of us in this field,” Jennifer Wilcox, a chemical engineering professor focusing on carbon removal at Worcester Polytechnic Institute, told Bloomberg Environment. “There’s no question that permanent removal of carbon dioxide from the air will be necessary to meet our climate goals, but it should not be seen as a replacement for the less costly approaches of increased energy efficiency and mitigation.”

Carbon dioxide can be removed from the atmosphere by using industrial processes to suck it directly from the ambient air or by other methods, including ways to mineralize and solidify it. New forests can be planted to store more carbon dioxide in tree trunks and roots, or trees can be grown to be used as fuel for electric power plants that would capture and store the carbon emissions.

Companies are testing ways to suck carbon dioxide from the air and turn it into marketable products, such as carbon fiber, concrete, and transportation fuel.

Firms attempting to commercialize carbon removal technology say the report is wind in the sails of their fledgling industry, but they need political support to ensure there will be a future market for the carbon they remove.

“We think the IPCC report establishes the need” for carbon removal, Steve Oldham, CEO of Carbon Engineering, told Bloomberg Environment. “We also think we have a solution. The missing piece is policy.”

British Columbia-based Carbon Engineering operates a demonstration plant that captures carbon dioxide directly from the ambient air and is developing technology to turn the captured carbon into transportation fuel.

“Ultimately, politicians are going to be driven by public sentiment, so we hope that public awareness of the need for negative emissions is going to drive policy and result in increasing investment in this area,” Oldham said.

The IPCC report “underscores the urgency” of a “circular” economy, in which emitted carbon dioxide is removed from the atmosphere and re-used, Nicholas Flanders, CEO of Silicon Valley-based Opus 12, a carbon dioxide recycling firm, told Bloomberg Environment.

“I think the report will cause leaders who have already committed to a clean energy future to double down on support for research,” Flanders said. “A critical piece in such support will be to include funding not only for basic research but also for demonstration projects at scale.”

Though the IPCC says climate change can’t be reined in without carbon removal, climate scientists and analysts warn of its potential tradeoffs and high costs and that it may distract from decarbonizing the global economy.

Without a price on carbon, little incentive exists to remove it from the atmosphere, Kevin Trenberth, a climate scientist at the National Center for Atmospheric Research and a co-author of previous IPCC reports, who is skeptical about carbon removal, told Bloomberg Environment.

“High-end [carbon removal] could have severe impacts on food, water and biodiversity if it could even be made to work at scale in an economically viable way, so is taking a huge risk,” Shindell said.

For example, planting forests for carbon sequestration or fuel for power plants could displace food crops.

Many large technical and social barriers stand in the way of sequestering the amount of carbon dioxide the IPCC projects is needed, Michael Wara, director of the Climate and Energy Policy Program at Stanford University, told Bloomberg Environment.

“My expectation is that this will not occur over the time frames envisaged unless there are dramatic changes in climate that fundamentally alter the politics of taking action on climate change,” Wara said.