California’s 2020 wildfire season thwarted the state’s fight against climate change, spewing enough carbon dioxide into the air to equal the emissions of millions of passenger vehicles driving over the course of a year.

Those roughly 9,600 fires burned nearly 4.2 million acres, killed 31 people, and emitted an estimated 112 million metric tons of carbon dioxide, according to a California Air Resources Board report released Dec. 31. The number is akin to the greenhouse gas emissions of 24.2 million passenger cars driving in a single year, according to a calculator from the U.S. Environmental Protection Agency.

And the emissions figure is expected to increase as the California Department of Forestry and Fire Protection calculates final wildfire acreage from the end of the year. An update should be released in March or April, said Dave Edwards, assistant division chief in the Air Board’s air quality, planning, and science division.

Increasing fire intensity and the health dangers of the accompanying smoke is California’s new reality and needs to be faced now, advocates and politicians say.

“We’re always going to have fire in California and, with climate change, we’re going to have more,” said Bill Magavern, policy director for Coalition for Clean Air. “We shouldn’t treat it like this is something that’s going to happen once in a while.” 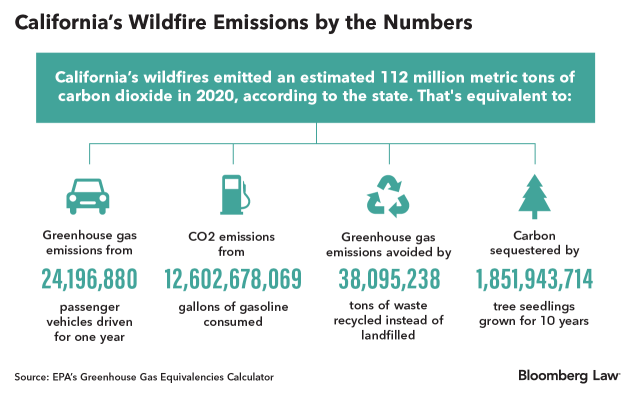 Five of the six largest fires in state history happened in 2020, and the smoke fouled air quality for weeks, at times blanketing San Francisco and other areas in an eerie orange glow.

The 2020 emissions are a setback for the state’s push to be climate-friendly.

“California has been a leader in the greenhouse gas reduction area, but the reality is these fires have absolutely undermined that progress,” state Sen. Bill Dodd (D), who authored a 2018 bill requiring the agency to calculate wildfire emissions, said in a Monday interview.

The California air board report also studied emissions from controlled burns, clearcutting, harvesting, and other forest management actions that could lessen fire risk. Prescribed burns, which are planned fires to reduce vegetation and trees, have emitted on average 14 million metric tons per year of carbon dioxide between 2000 and 2019, the report said.

“Prescribed fire is really important and can mitigate the effects of a fire on a landscape,” Edwards said.

Some communities and environmental groups have opposed planned burns because of the effects on immediate air quality. But supporters say the benefits make it necessary to remove fire risk.

“I think so many of the scientists agree there needs to be more prescribed burns and managed burns,” Magavern said. “You get smoke, but it is so much less than when you get those catastrophic fires.”

California needs to spend more money on wildfire prevention, home hardening, and other efforts to minimize the threat from climate-related fires, Dodd said.

“We cannot fight our way out of these fires,” he said. “Prescribed burns should be our friend right now, to be able to do them on days when our air quality is not so bad so we don’t have these issues during wildfire season.”

“It still is quite an uncertain science,” Edwards said.

The report lacked estimates of other components found in wildfire, including polycyclic aromatic hydrocarbons (PAHs), a class of more than 100 chemicals that can cause cancer, and has been found in air, water, soil, and dust after wildfires.

The bill didn’t require officials to measure PAHs and other ingredients of smoke, so they weren’t calculated, Edwards said.

But the state has funded a study with University of California researchers at the Berkeley and Riverside campuses to measure the composition of PM 2.5, which are tiny particles many times thinner than a human hair and a key component of smoke. The research can detect more than 400 chemicals, including PAHs.

“Wildfire smoke from wood in a forest contains thousands of individual components,” Nehzat Motallebi, an air pollution specialist at the Air Board’s Air Quality and Climate Science Section, said about the research in October.

Magavern said more research is needed, particularly when it comes to the health effects of wildfire smoke.