Decades later, the water cases are few and far between—while hundreds of product lawsuits bring in millions of dollars annually for plaintiffs’ attorneys, some of whom represent environmental groups focused only on this law.

The Safe Drinking Water and Toxic Enforcement Act of 1986—commonly known as Proposition 65— came into being during Ronald Reagan’s time as president, when the U.S. Environmental Protection Agency was slashing regulations and loosened enforcement of pollution standards.

Attorney General Rob Bonta (D), who took office in April, is now taking a closer look at the law to see if areas exist in which “there may be gaps in existing regulation or that have previously fallen through the cracks,” he said in a statement to Bloomberg Law based on questions about its effectiveness.

“Over the decades, the California Department of Justice has used Prop. 65 to secure some of the strictest standards in the world, but more work remains to protect our communities and environment,” he added.

Proposition 65 had a simple premise: The state would create a list of chemicals known to cause cancer, birth defects, or reproductive harm.

Those chemicals couldn’t be discharged into waterways. If products contained the chemicals, they needed a warning so consumers knew about the potential exposure.

The hope was companies would reformulate their products to remove the risk. It allowed for civil suits and fines of up to $2,500 per day.

“If you split it into two laws, I would have to say that the warning law has been extremely successful and the discharge law is much less well-known,” said David Roe, who wrote the ballot question for voters and was senior counsel for the Environmental Defense Fund.

Since 1997, a little over 35,000 notices have been filed as of Thursday by private parties with the state Attorney General detailing violations under Proposition 65. Of those, 698 filings were related to discharge cases, and none have been filed since 2019, according to a program database maintained by the state Department of Justice.

The discharge statistics represent less than 2% of cases over 24 years. Bonta’s office said the number of discharge cases may be a bit higher because information required in the early years of the law was not as detailed, meaning cases related to leaking underground storage tanks, oil field leaks, or other situations may not be included in the final tally.

“It’s an underutilized part of the law for sure,” said Andrew Grinberg of Clean Water Fund and Clean Water Action, which has successfully settled two discharge cases in the past two years, shutting down unlined oil and gas wastewater pits. 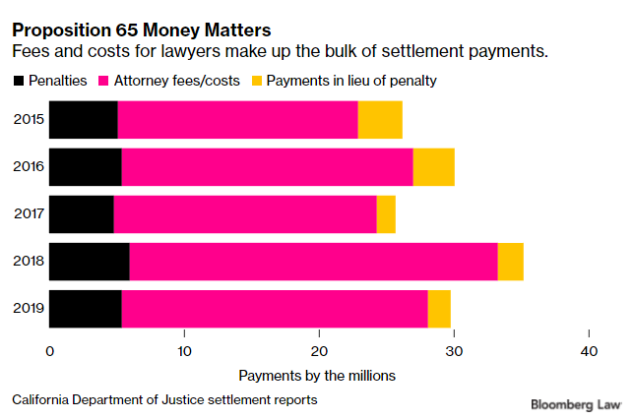 In addition, the nearly 3,800 settlements from 2015 to 2019 generated $142.2 million in penalties and attorney’s fees or costs. Of that total, nearly $109 million went to law firms, with the rest going to penalties or payments in lieu of fines, according to state settlement data.

State officials say the law has prompted thousands of product reformulations and has been remarkable with cases involving lead, prompting its removal from candy, children’s jewelry, drinking faucets, and Astroturf.

And the Attorney General’s office in February used the provision to force a steel company to install pollution control measures and inspect surrounding areas, after settling over claims it released hazardous or toxic air contaminants at its West Oakland facility.

No Power to Enforce

The state’s program is a complicated one. The Office of Environmental Health Hazard Assessment oversees the list of chemicals, decides what is added, and establishes regulations. But it has no power to enforce violations, said Carol Monahan Cummings, chief counsel for the agency.

The list is 23 pages and includes everything from alcoholic beverages and aloe vera to vinyl chloride and wood dust.

The state attorney general and certain district attorneys can file Proposition 65 lawsuits. Private parties also can do so, but must give 60 days notice to the company and the state about the violation. Settlements can be arranged in and out of the courts.

In the early days of the law, several discharge cases were filed but “it didn’t take very long before it became based on warnings,” Cummings said.

One case against ., which focused on migrating chemicals, failed in court and the decision was upheld by the state Courts of Appeal, blocking off an avenue for similar discharge cases, Bonta’s office said.

Warning cases are a lot easier to prove and settle. They involve buying a product, testing it, finding a chemical on the Proposition 65 list, and filing a notice of violation if no warning was issued. The cases almost never wind up at trial.

Discharges are harder to prove because the law is a bit vague, said Howard Hirsh, a partner at Lexington Law Group in San Francisco. His firm has filed both warnings and discharge cases, though the latter was more than a decade ago.

One main issue is delineating the discharge.

“There’s just a lot more difficulty in proving where, how, and who is responsible for the discharges,” Hirsh said.

That’s not to say they don’t happen, albeit rarely.

Penalties factor into the disparity as well, because warning cases can lead to daily fines per product sold while discharges are just one event, Roe said. That means if a product was sold 10,000 times, the daily fine would be multiplied by that much.

“It’s only one violation even though it might be a much larger toxic insult,” he said. “The economic incentives are so much more favorable for warning cases.”

Indeed, the money is out there.

In the five years through 2019, lawyers fees and costs accounted for nearly 77% of the settlement money, according to annual state reports. But the Attorney General’s office notes that those reports don’t detail injunctions to remove dangerous chemicals or other actions and monetary payments taken in specific cases.

Plaintiffs’ attorneys also said it costs money to file cases and they do the work on contingency, earning nothing if the case is lost. They also go up against corporate lawyers from , , and other businesses that have the money to test products before putting them on shelves.

“Yeah, a lot of it goes to attorney’s fees,” said Vineet Dubey, co-founding partner of Custodio & Dubey LLP in Los Angeles. “That being said, there’s a lot of risk-taking that goes into these cases.”

Dubey represents Ecological Alliance, which has no website but filed 333 warnings cases from 2017 to 2019, according to state records. Of the $4.8 million in settlements obtained during those two years, nearly $4.5 million went to attorney’s fees and costs.

Dubey said he speaks for Ecological Alliance, which avoids talking to the media and is focused on ridding exposures to reduce cancer risk.

The group’s primary focus is on lead and phthalates, which are plasticizers that can damage the liver, kidney and bodily functions. It has successfully settled cases related to baby food, fruit, backpacks, and manicure sets.

“They are a group of concerned citizens who really want to clean up the products that are being purchased in California,” Dubey said. “We’re litigating these cases on behalf of the public.”