An aerial view of Highway 1 in California.
Photographer: Nic Coury/Bloomberg

The $303.5 billion highway bill that the Senate Environment and Public Works Committee is scheduled to mark up would boost funding by 34% compared with the last long-term surface transportation law ().

The legislation covers just a portion of the eventual reauthorization and three other Senate authorizing panels will weigh in, including on contentious issues such as transit and financing. Congress must act by Sept. 30 to avoid a lapse in the programs.

But the bipartisan compromise released by the panel’s leaders is already facing divergent views from top outside groups, highlighting potential political hurdles ahead.

“At its core, the EPW bill largely maintains the status quo that made American transportation so inequitable, unsustainable, and unsafe to begin with,” said Corinne Kisner and Janette Sadik-Khan, the top officials at the National Association of City Transportation Officials.

“We cannot fix what’s wrong with American transportation without fixing the fundamentals, and EPW’s proposed bill is insufficient given the gravity of the problems facing the U.S. today,” they said in an email. 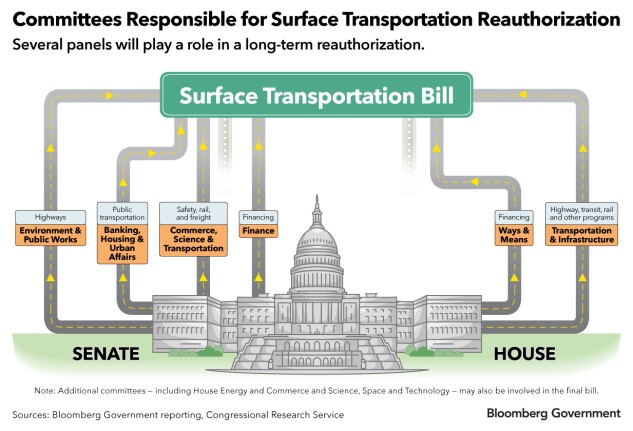 They also offered it as a contrast to the partisan rancor around President Joe Biden’s $1.7 trillion broader infrastructure package known as the American Jobs Plan — a total revised from $2.25 trillion after talks with Senate Republicans including Capito.

The committee’s proposal, a portion of the total surface transportation bill, includes Democratic proposals such as boosting infrastructure for electric vehicle charging and reconnecting communities cut off by highways. It also addresses GOP priorities of reducing regulation, giving states more flexibility, and streamlining the environmental review process for major projects.

Under Republican control last year, the committee was the only Senate panel to produce a component of a surface transportation package. The Senate didn’t act on that measure or a broader House-passed infrastructure package backed primarily by Democrats. The programs were instead extended for a year ().

Kisner and Sadik-Khan praised the bill’s plans to reduce carbon emissions from the transportation sector and fund complete streets projects, but criticized its funding for highway expansion.

“It also continues the broken system of cutting cities out of decisions that directly impact their streets and residents,” they said.

The bill tries to tackle transportation policy issues such as increased pedestrian deaths and rising emissions the same way lawmakers have in the past: by creating “exciting new programs with a small amount of funding in the hope that it can fix the problems that will continue to be created by the much larger status quo program,” said Beth Osborne, director of the advocacy group Transportation for America.

She said if the committee adopts changes “that support fix-it-first, equity, safety, and our climate, this bill can achieve the outcomes we all care about.”

The panel received 92 proposed amendments to the legislation, according to someone familiar with the issue. It wasn’t immediately clear how many the committee would vote on.

Deron Lovaas, a senior policy adviser at the Natural Resources Defense Council, lauded many of the bill’s climate provisions in a May 25 blog post, but said the legislation “doesn’t meet the moment.”

From the other side, groups such as the American Bus Association and the American Association of State Highway and Transportation Officials praised the measure. Jim Tymon, the state highway group’s executive director, said it provided “much-needed program stability,” giving states 90% of total highway funding from the Highway Trust Fund by formula.

“It also directly addresses resiliency, carbon reduction, and safety for all roadway users, while supporting urban and rural communities, improving project delivery, and providing the flexibility necessary for states to maintain and improve their roads and bridges,” Tymon said in a statement.

The bill, which includes a section on climate change, would authorize $2.5 billion for infrastructure grants to electric vehicle charging and alternative fueling, such as hydrogen and natural gas, and $6.4 billion for states to reduce transportation emissions. The environmental review process for major infrastructure projects would be shortened to an average of no more than two years.

Michele Stanley of the National Stone, Sand, and Gravel Association said in an email the bill incorporates “essential policies for our industry,” such as reduced regulation on project reviews and increased flexibility for how state transportation departments use federal funds.

The bill’s “constructive, bipartisan approach” should be a model for the broader infrastructure debate, said Neil Bradley, executive vice president and chief policy officer at the U.S. Chamber of Commerce.

“This is particularly important at a time when some appear too willing to abandon discussions that can lead to long-term, durable infrastructure policy,” he said in a Tuesday letter to the bill’s sponsors.