Energy-guzzling tech titans such as , , and are pressing energy regulators and lawmakers for favorable power grid policies that speed procurement of clean power.

The companies, which dominate a tech industry powered by global data center operations, have entered a debate once controlled by electric utilities and policy wonks well-versed in a century-old system of producing and delivering power. They have staffed up with energy experts and become a regular presence and sponsors of industry panels and meetings.

The major power consumers view the Federal Energy Regulatory Commission’s grid policies as key to accelerating the rollout of clean energy spurred by incentives in the Inflation Reduction Act, the $369 billion climate-and-tax bill passed by Democrats. Their lobbying has occasionally clashed with regulated electric utilities, which operate the distribution grid and dominate transmission line-building.

The new law “is going to have a large impact on our ability to meet the climate pledge,” Blair Anderson, director of public policy for Amazon, said in an interview. “As a result, we—and I think you see it from some of the other larger corporate procurers—are stepping up and realizing that we should have a voice in that process as well. It makes sense for us to become more engaged at FERC.”

Former FERC Chair Neil Chatterjee said the companies have “recognized that as large energy consumers, they didn’t just have to just be takers in the market, they have the ability to impact markets. And I think they’re moving the needle at FERC.”

‘Tip of the Iceberg’

The fruits of the companies’ labor are indeed ripening.

FERC is working to finalize a rule that requires utilities to consider a wider set of benefits for regional transmission. That includes—for the first time—corporate purchases.

The commission has also promised to speed up the process of connecting new generation and a new reliability standard for the grid in extreme weather conditions.

“We are in this moment where the market and policy-makers are recognizing that customer-driven clean energy is real,” said Bryn Baker, senior director of market and policy innovation for the Clean Energy Buyers Association. The Washington trade group consists of more than 300 companies, including the Big Tech firms, that buy clean energy or partner with consumers.

“The amount of activity in the marketplace is just the tip of the iceberg of what actually could be unleashed,” Baker said.

This year alone, Meta picked up Jeff Bladen, who worked for more than seven years at the Midcontinent Independent System Operator, which oversees the flow of electricity to 42 million people across 15 states and the Canadian province of Manitoba.

Google hired Brian George, a lobbyist for the Electric Power Supply Association who previously worked at FERC. And Microsoft picked up Brianne Miller, who worked on the Senate Energy and Natural Resources Committee and at Idaho National Laboratory.

Beginning in 2021, Microsoft and Google have lobbied Congress on the issue of expanded wholesale markets, an effort gaining momentum in much of the West, according to an analysis of lobbying disclosure forms. And transmission shows up in the two companies’ lobbying forms beginning in 2021. Microsoft didn’t provide an interview for this story.

Energy lobbying is a relatively small but growing part of tech companies’ lobbying muscle amid antitrust scrutiny from the Biden administration and a bipartisan group of lawmakers.

The industry has been trying to ensure clean energy powers their data centers, which draw massive loads of energy. For example, Google reported electricity consumption of 18.3 terawatt-hours of electricity in 2021, compared with 7.6 terawatt-hours four years prior.

For comparison, total annual US electricity consumption hovers near 4,000 terawatt-hours. Google’s use was equal to 1.6 million average US households.

Amazon, Microsoft, and Meta led all companies in global clean energy procurement in 2021, buying 14.5 gigawatts of wind and solar projects, according to BloombergNEF. 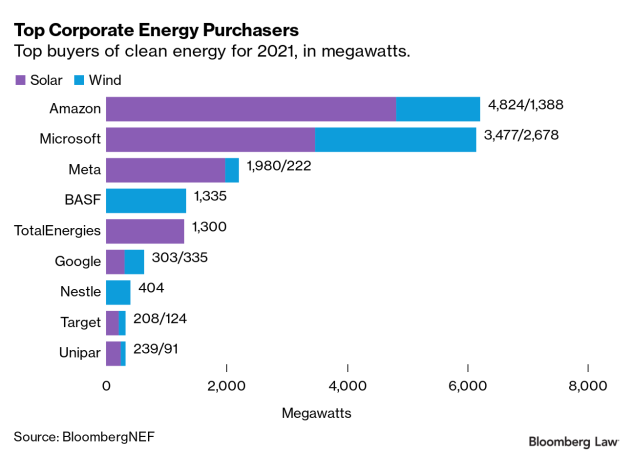 Meta isn’t picking wholesale markets or green tariffs, Bladen said, but is trying to keep consumers together on broader issues like transmission policy. The company’s pursuit of net-zero goals requires thinking beyond the short-term boom-and-bust cycle of the energy business, he said.

“Mechanisms to deliver against those goals really have to be as impactful and as broad as they possibly can—by thinking at grid scale,” Bladen said. “What does it take to actually deliver on our broad net-zero-carbon-by-2030 goal, and how does the electricity part of our operation fit within delivering that commitment?”

Regulatory barriers have been front and center since the first big companies pioneered the long-term power purchase agreement in the 2000s. The arrangement allows companies to buy renewable power directly from utility-scale developers.

But the rise of ambitious corporate net-zero goals, falling costs of clean power, and federal incentives pouring out of Washington has increased attention on a disconnect: The companies’ goals were being slowed by the bureaucracy of getting projects connected to the grid and wires installed to deliver power.

This was particularly true for Big Tech companies seeking to build energy-intensive data centers while being able to demonstrate to customers they were fighting climate change.

“We see the grid as the tipping point which gets us to a cleaner economy across the board,” said Caroline Golin, Google’s global head of energy market development and policy, during a transmission webinar hosted in September by Resources for the Future. Google didn’t respond to interview requests.

In regional wholesale markets that cover roughly two-thirds of the country, customers can contract directly with renewables. Transmission is planned by regional grid operators spanning larger areas instead of by individual states. Utilities generally oppose the expansion of wholesale markets to places such as the Southeast and West because they want to maintain control of the energy system.

“Carbon-free is something they can start to procure, but they don’t want to do it at a point where it impacts reliability,” Cooper said. “That’s another piece of the puzzle that the customers are trying to wrestle with a little bit more.”

The large corporate customers “really want reliable, and that’s the utility’s job to do that,” he said.